Jaan's name and a 2-week update

By Phyllis
(This is a test at moving old updates over from our willphyl.com site. Our blog actually started in June 2005.)

We've had lots of questions about Jaan's name, so I decided to write a little about it.
We had a very hard time trying to decide what to name our baby. In fact, I pretty much gave up on ever finding anything. It had to be something our American friends and relatives could easily pronounce, and also, we wanted something that wouldn't be hard for everyone here. Early on we had discussed a certain name that we both liked:

The only problem was how to spell this name in English. I said that we could just go with Yan, the simplest way to write it, but Will didn't like the way that looked. (By the way, for those who are still curious, the J in Jaan is pronounced like a Y.) After we discussed it and didn't come up with a good spelling, we threw out the name...or so I thought.

Then, on August 19 we were traveling back from our wonderful trip to Estonia. Will was furiously writing all over the backs of our train tickets. I asked what he was doing, and he said he was figuring out how to spell our son's name. Finally, he called the conductor, who was Estonian, and asked her how it would be spelled in Estonian. She looked at us strangely and scrawled "JAAN." Will asked if I had any objections to that, and since I didn't, our decision was made.

Jaan is actually a pretty uncommon name here. We have one friend named Jaan, and I've heard of another. It's actually a more Eastern European variation of John. We ended up with a name just uncommon enough that Jaan won't have a bunch of friends with his name, but something that everyone knows. 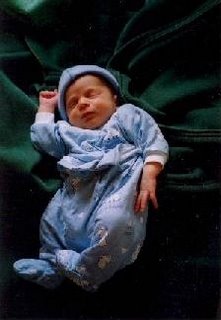 And now an update:
Jaan...
He's already two weeks old! I think he's grown and filled out a lot, but other people don't notice that as much as I do. He still doesn't do much but eat, sleep and be sweet, with a few fussy times mixed in. Jaan loves bath times; he gets to "swim" in the big tub (with one of us holding on to him, of course). We've noticed that in the past few days Jaan has started meeting our eyes more. He's more alert in general, and can "entertain" himself a little. He lies on the bed and makes quiet noises, instead of starting to cry as soon as he realizes he's alone. We took him to a prayer meeting today, which was his first time out with other people, and he behaved wonderfully; he slept! =)

Papa...
Will is helping out this week with a short term missions group from the States. He's spending all day, every day translating. Even though he's enjoying that, he misses being home with his little guy.

Mama...
I'm feeling great and getting stronger every day. There are still some little health problems that I'm dealing with, but I'm very thankful that they're not causing me any pain or discomfort.