By Phyllis
While I was gone for two whole weeks, Will kept up with everything here. On top of the usual, he celebrated Bogdan's fourth birthday, did two music school concerts with our own children and attended one more for our friends, supervised the school list that I left, cleaned our house top to bottom, AND redid our bathroom.

Photo evidence of the latter: 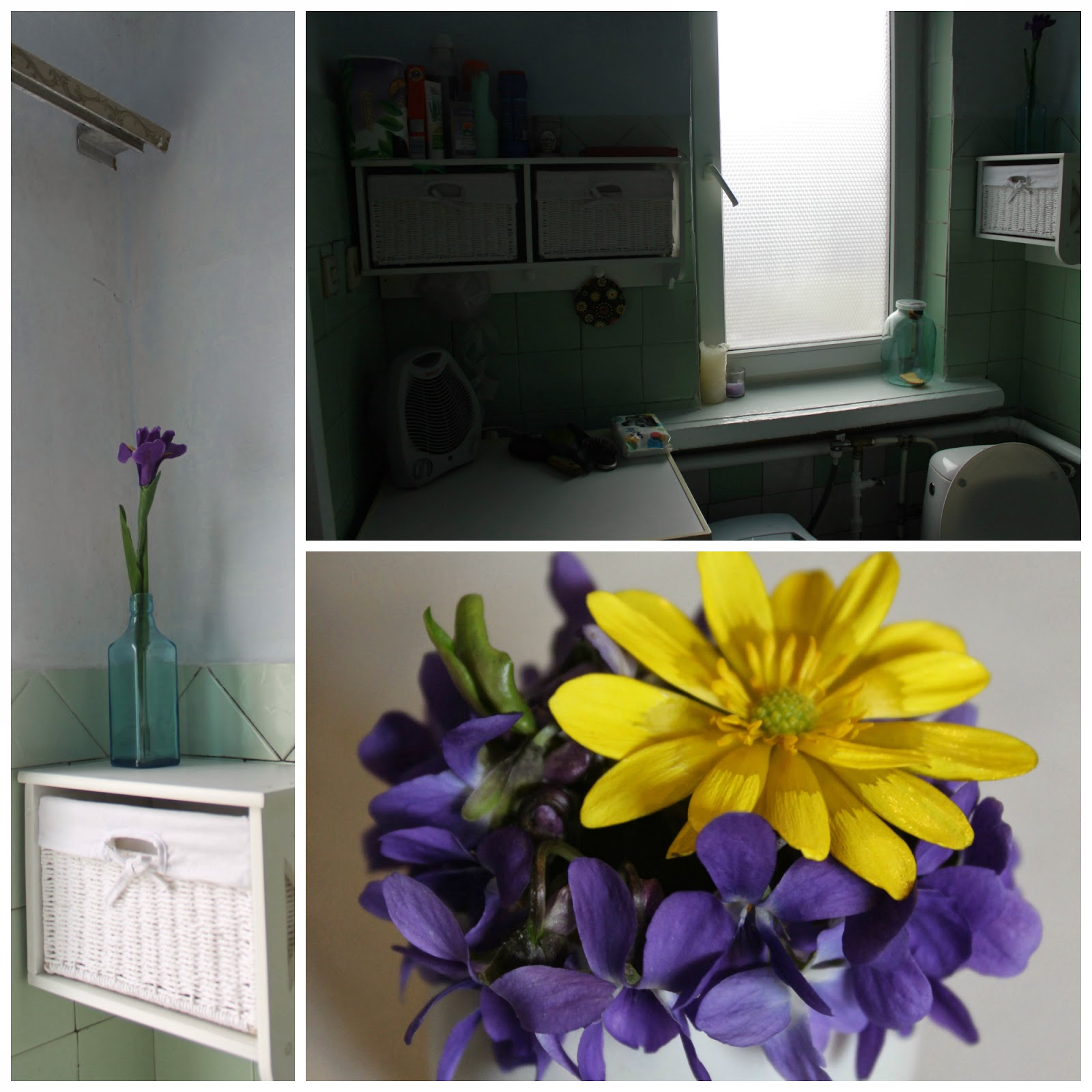 The bathroom was in bad condition, but without before photos, you'll just have to take my word for it. The tall, skinny photo shows white wall space. Before, all of that was icky grey from mildew. Tiles had fallen off the walls, and there was nowhere to put anything. It all looks incredible now. 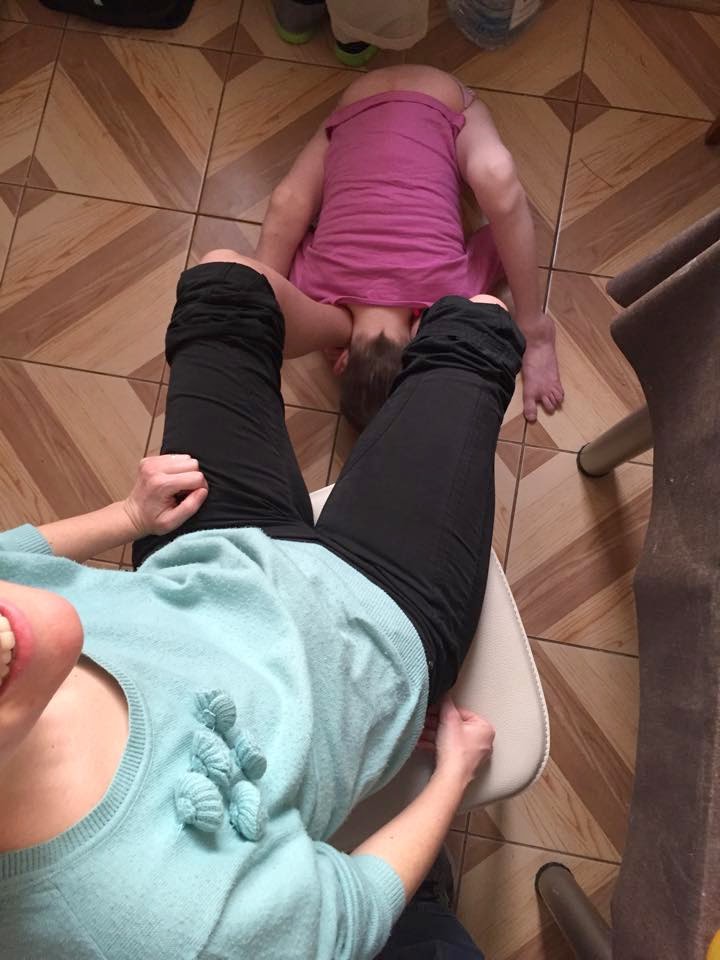 I just got back from two weeks in Kyiv. A wonderful family was adopting their sixth, seventh, and eighth children, including one from "my" orphanage. So, I went to Kyiv to stay with the one from here, while her mother traveled to get her brother, and then to help with all the Kyiv running around (and waiting) that they had to do. I know many of you were praying for me/them/us. Thank you! We definitely needed those prayers.

It was really a treat for me to see these children start to bloom. This was just the beginning of the wonders of what they have ahead of them, but it was already dramatic. The picture above shows my little friend, and one of the ways she liked to calm herself after exciting times out in the big world. My first two days with her--while her mama was gone--she was like a newborn. She only wanted me to hold her with lots of skin to skin contact, feed her, and put her to bed. She's sixteen, but she has missed out on so much! She's very, very far behind where a 16-year-old with Down syndrome would usually be.

Then her brother joined us. He's 11 and also has Down syndrome, but he had been in a school, and is in much better shape. (He is so much fun, and he was also starting to bloom and change while I watched.) And we started spending more time out and about. The first time in a restaurant, my little friend tried really hard, but she was so fluttery and anxious that she couldn't eat at all or sit for very long. I took her out and walked her back to the apartment early. A few days later--just a few days!--we tried again at the same restaurant. This time she ate about half her food and handled everything well enough that we even sat and ate dessert; she got a little bit worked up while we were finishing that. A few more days, and we actually tried T.G.I. Friday's, where she ate a nice meal and sat happily, even in a loud environment, even when the power went out. Then... the finale: back to the first restaurant on another evening. This time, we went through the line and got our food. She gulped hers down. I went back for seconds for her. Then thirds. She would have taken more, but we stopped there, and she just nibbled off what I had for myself. This time she was perfectly calm and happy. That much progress in less than two weeks!

That's just one vivid example. I could write more about watching them gain weight, confidence, smiles, trust, ability to express themselves.... (Not to mention how much I enjoyed the super-cute baby brother, too.)


I'm adding a photo of them that I took outside the American embassy, after their last appointment there, when they got their visas: 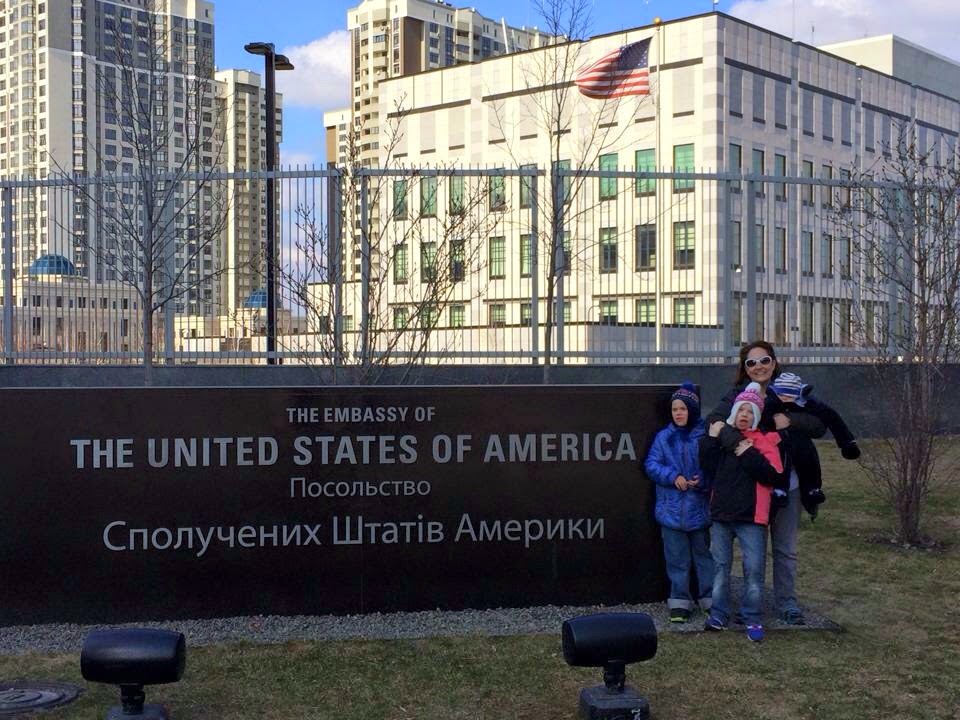 By Phyllis
He had them delivered to the fancy restaurant where we were having dinner with all the missionary couples for Valentine's Day. I was so surprised!


For several years now, Jaan has been piano-less. Since we moved here, he has practiced on an old, kiddie keyboard that our neighbors loaned us. This week Will bought a used electric piano being sold by people leaving Ukraine. Jaan's loving it!


And now a few quotes from Bogdan:
Bogdan and I were crossing a road in a crosswalk, when he looked up and saw a truck headed toward us. It was stopping, but apparently he didn't know that, because he told me something like, "Need to run! I don't like when I'm dead."

He was upset by the fact that dogs, um, do their business on the ground, and he came up with a very creative solution: "Хай 'ав-'ав ед на humph ко-о-о и там кака." Got that? I laughed because he started off with Ukrainian and then included his great love of Kipling, too, not to mention the creativity, and still in his own language. He meant that the dogs should ride camels to somewhere far-r-r away and make their messes there.
Posted at 20:23 2 comments:

By Phyllis
Two big things going on next week:
1) I'm going to Kyiv with a mother who is adopting, just to help out however I can. I'll be staying there with her daughter from here and maybe her baby from Kyiv, while she goes to another region to get their other new son. Please pray for all of us and all the details involved. Plans are still very flexible, and I don't know yet when I'll be back.

2) Will will be staying here with our children, of course. He also needs to keep up with renewing our residency and at least some of what he does for Agape. So, pray for all that, too, please.

I'll try to post some photos and funny Bogdan quotes before I leave. Stay tuned.
Posted at 18:59 1 comment: