By Phyllis
Let's see if this works.... I am definitely not a videographer!


On a completely different subject, but I don't think I'll fit it in any other way: Jeanne wrote about her scarf. Here's mine: 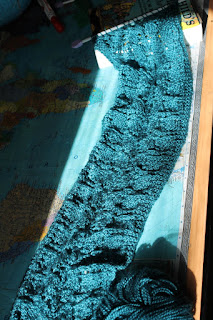 Knitting is what keeps me sane. The yarn Karen gave us is just lovely, so soft, and it even shines. Maybe that's not the word for it. I don't mean that it glitters, but maybe you know what I'm saying. And I'm enjoying the same nostalgic sigh with Jeanne right now.

I just had to come back and add this quote:


"Knit on, with confidence and hope, through all crises."
--Elizabeth Zimmermann.

By Phyllis
You've probably heard that we have to move to another apartment. Sunday some people looked at this apartment; Tuesday they came back to tell us that they had bought it. They gave us 7-10 days to be out. (Yes, it's legal. That's just kind of the way things work here. We've always had pretty good experiences with renting, but we've seen stuff like this happen to so many others!)

The next day Will went out and found us another place to rent. Got that? The next day! It's really unbelievable in a city of this size and with the situation here. I don't know when we'll move into it. Soon.  Please be praying for us as we pack up and move.

And pray for all of our hearts, too, please. Obviously, leaving the nice apartment that we have enjoyed so much is not the end of the world. We knew this day would come. But it's not easy. It seems like really bad timing. Our children aren't happy about it either.

I was encouraging myself by looking back at photos of other apartments that we've lived in and reading old blog posts. (This one is fun. They were so little last time we moved!) I'm going to repost and add a little to another old one below. This is originally from 2010:


As you may know, we're moving soon! I've been thinking a lot about how God has provided housing for us over the years. Since I don't have photos of our new apartment or details about it yet, I'll tell you about the apartments we've lived in before.

February-June 2001; Charlotte, NC; $500 a month. (I'm including the prices. That might be too much info, but the trend of bigger and cheaper is fun to follow.) We rented the upstairs of a garage, just a few blocks from Will's parents. The apartment was tiny, and it had lots of character. I remember standing there and noticing that the floor leaned one way, the window sill another, the counter yet another, and the angle of the ceiling didn't match any of the others. It swayed in the wind of a strong storm. We could look down on the tiny patch of yard of the duplex behind us and watch their one pet chicken. . . right in the middle of Charlotte!

September 2001-February 2004; Moscow; $300. This apartment was a two-room* in very bad condition. It was on the sixth floor of a nine-story building. Before we lived there, it had been used as some kind of office and workshop. We had no money to fix it up, so we did a lot of creative covering and rigging things. Furniture was a strange mix of the office stuff left there, what Will found in the trash and even a loveseat that he built himself. It was a great place to live! Jaan was born there.


February 2004-May 2007; Kovrov; whatever the landlord could squeeze out of us! (I can't remember what we were officially supposed to be paying him. I'll have to ask Will. It did change often.) This was my favorite apartment, even though it was packed with clutter and the roof leaked.

It was also two rooms, but the layout was really great. The kitchen was big, and it just felt big overall. This apartment is where Raia was born. When the landlord got tired of FSB bothering him about us, and we also couldn't take his daughter, we had to move out.

May 2007-February 2008; Kovrov; 2000 rubles? When we had to move, our neighbors found us a place on the first floor of the same building. It was smaller, and we didn't really get to make it feel like home, but it was nice. And Asya was born there.

May 2008-April 2010; Dneprorudnoe; 1000 hrivni (that's $126 at the moment) + utilities. Three rooms for the first time! Although the size was about the same as my favorite apartment, it's been nice to have separate rooms. We've done a lot to make this apartment feel like home, and our friends the Sullivans really worked hard to make it look nice! Now our landlady's son wants to live here, so we have to move on.

April 2010-October 2012; Dneprorudnoe; 1200 hrivni, utilities included. Four rooms! Details will have to come later, though. There's a map below that shows both our old (blue dot) and new (yellow dot) buildings.... [2012 update: This apartment has been wonderful! Probably the best physical feature is the open layout. The owners had taken out several walls, which opened everything up in a way that I had only dreamed about before. We have also really gotten to know our neighbors well. Especially recently the babushki here have become so complementary about our family that I am embarrassed and also confused: they're supposed to tell me what I'm doing wrong, not how wonderful they think we are! We'll miss them. Oh, and I have to add the note like what I have on three other apartments above: Bogdan was born in this one.]

October 2012-?; Dneprorudnoe, over by the church, if you want a more specific location and are familiar with the city; 1400 hrivni, utilities included. Back down to three rooms. (We're breaking our trend.

) And, like I said the last time I wrote something like this, I guess details will have to come later.


*In Russian we say the number of rooms, not just bedrooms like in English. So, a Russian two-room is like an American one-bedroom. I'm using the Russian way here.

By Phyllis
I have a lot to write about: Lugansk, Julie's visit, youth conference here, and more, but how about I start with school last week. I doubt that I'll get much farther than that, but we can hope, right? 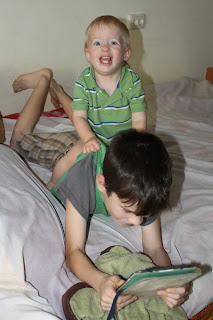 Week 4 was spread out over several weeks, mixed in with traveling and guests.

One Tuesday we settled in to work on Week 5 and find our regular rhythm again. And it was a good week, even if I still feel like we're a little off kilter. A few favorite moments: I read the story of Regulus to Raia. She understood all of it and retold it well, with lots of feeling about how Regulus had to leave his wife and family. Then she told me, "But it's okay, Mama. If it would have been you, we would all have gone back with you, and all would have been well. We would have died together in prison."

Jaan actually drew a picture for one of our readings this week. That is monumental for him, and I loved it. Parables from Nature probably has the distinction of being the most questioned AO book out there, but it's my favorite. My love of it must rub off on my children, because even though it's hard, they don't mind it. It lends itself to drawing, because even if they don't get the deeper ideas, they can imagine the plants and animals. So, Jaan must have gone back to his memories of Pagoo, because he drew wonderful, realistic sea creatures, and he really worked hard on making them just right. 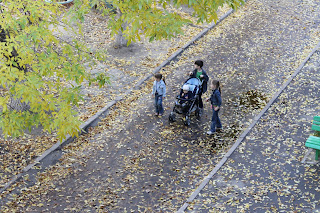 And now it's already time to start Week 6?

By Phyllis
I definitely want to write about our trip to Lugansk, but that will have to wait, because we're enjoying Julie's visit and fall and walks in the park and butterflies right now. 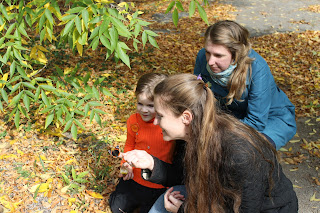 If you want to see photos from the trip now, and if you're on Facebook, there are quite a few on Grace to Ukraine's page. Here are some direct links to albums for the days that we were with them: Day 2, Day 3, Day 4 and Day 6.
Posted at 13:32 2 comments:

By Phyllis
We're on our way to Lugansk! If you're in our church families, you got a prayer request from us about this. We're going to visit orphanages in the area of Lugansk and see the ministry that is going on there. Here is a link to a daily prayer guide for this trip. It was put together by the organization we'll be visiting with: Grace to Ukraine.
Posted at 06:15 1 comment:

By Phyllis
This is my new favorite photo: 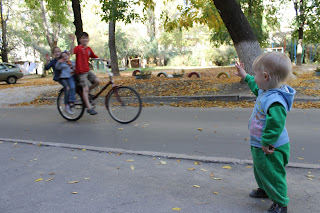 Bogdan has learned to shake hands. He started on Sunday at church, going around and around, shaking hands with everyone over and over. Yesterday he was in the stroller while Will met with someone, and he was very emphatic and enthusiastic about the fact that he had to greet the other person, too. And today he was shaking hands with all the babushki outside; they loved it.

He has also started "praying" before meals. I call it the vain repetitions of the heathen, but it sure is cute. He folds his hands, bows his head and babbles. I did ask him if he was thanking God. That made him add signing "thank you" to his little ritual, so maybe it became more than an empty ritual. The funniest is when he notices that meal time is getting close, so he's trying frantically to climb up into his seat: yelling, scrabbling at the chair, throwing himself against it... periodically he stops, quiets down, "prays," and then goes back to his loud frantic struggles.
Posted at 16:58 3 comments:

By Phyllis
As you probably know, Bogdan and I took a trip to Poland. We had a wonderful time! It was so much fun to actually meet Jeanne from Australia (and her mother) and spend more time with Karen and her family. I've "known" Jeanne for quite a while, and I've been working with her for over a year as part of the Ambleside Online Auxiliary; now I really do know her and love her in real life, too.

Bogdan and I went on an overnight train to Kiev, and then we flew from there to Katowice in Poland. Jon and Karen picked us up there (and we saw deer on our drive back to Krakow. I think the deer are one of my favorite parts of Poland.

) Jeanne and her mother arrived the next day. On Saturday Karen took us on a walking tour of the old center of Krakow. Sunday we went to their church, where I enjoyed talking to all the people who remember us from our visa trips and are so kind and friendly. Then we went to the Jewish quarter, ate a nice lunch, walked around, and went on a driving tour that included a suburb that was built as a communist showcase. Monday we went to Auschwitz. I don't know what to say about that; I did not enjoy it, but it was worth seeing. That evening we had a group Skype call with our mutual friend, Leslie: fun! And then the next day we started our long treks back home. I don't think I can even express how good it was for me to be able to go on this little vacation! I haven't talked and laughed that much for a long time.