By Phyllis
We're doing well, we just don't have an internet connection. We've moved into our new apartment, and we're working on cleaning up and settling in. We'll probably get internet set up there in a week. I'll write more then. . . .
Posted at 14:42 2 comments:

By Phyllis
I finally got photos up. They have a pretty good internet connection here; sometimes it goes fast for incoming, but it never does well with outgoing. I tried all the photo storage places I know of yesterday.

Anyway, on Monday we went to see the apartment, meet the landlady and get the keys. The amazing thing is that she's been going to a church for a year now! Last year her mother and husband died. She said it was the hardest year of her life, so she starting going to the church. In her own words, she doesn't understand much yet, but she wants to come to us to hear more!

The apartment is three rooms (that's the Russian way of saying it; Americans would say two bedrooms), but it's not much bigger than the two room (one bedroom) apartments we've always had. Still, it will be nice to have the rooms divided up. The overall impression at first was dirt and clutter and tight spaces. After a little while, I left with the children, because it was just too dirty. Will cleaned for the rest of the day, and got their room into good shape. Tuesday we started to work on the rest of the mess. One young man from the church spent the whole day with us, and three girls came after work. I brought the children back here at bedtime, and everyone was still going strong. Even by the time I left, it was looking much better.

Yesterday Will went to order a hot water heater. I talk about how much better it would be for cities to switch from municipal hot water, to individual hot water heaters. Dneprorudnoe did that a few years ago. I forgot that Soviet apartments don't have any nice little hiding places for anything to heat the water and that it would be some trouble to make that switch. Still, Will found something, and we're hoping that it will fit hanging over the toilet. It should come in Saturday, and I'd like to see it installed soon after that, but we'll see. There were five others on order before us. After ordering the boiler, he spent the rest of the day cleaning.

The area around our new home is just beautiful! It's so green and clean! Actually, the whole little city is clean. That's the biggest difference we're seeing from rural Russia. That and people say an H sound instead of G.

Now, we're off to clean some more. If we work all day, we might get to where we can spend the night there tonight!

Enjoy the pictures I posted at the link above.

By Phyllis
I've been trying all day to post pictures and get something up here. I'm just going to go to bed. I did make some progress, so hopefully you'll be able to see tomorrow. . . .

All is well here. We are healthy and happy and busy!
Posted at 22:13 3 comments:

By Phyllis
There's more to Asya than this, of course, but I thought I'd make a post all about her. (And you'd better be grateful for the photos, because they're very hard to upload right now!)

Asya's passed some milestones lately. She continues to amuse us with her commando crawl, and that's getting faster every day. Her new steps are food and pulling up. She adores her buddy, Damara. Tonight I was holding Asya, almost asleep, when someone walked into the room with Damara. Asya's legs started kicking, and she was instantly wide awake and ready to play. Damara eats incredible amounts of bananas and other solid foods, so she's inspired Asya. Asya has tried bubliki (yes!), cheerios (okay-ish), and bananas (yuck!). Her face when she gets a bite of banana is hilarious. She insists that bananas are close relatives of lemons. 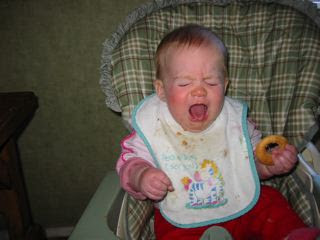 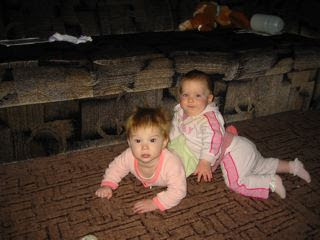 Damara and Asya
By the way, the inspiration goes both ways; Damara started crawling, after watching Asya for a while.

This is Asya's other recent accomplishment: 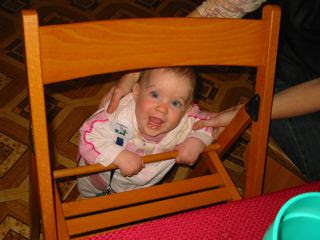 We were eating dinner, and Asya was on the floor. Then, all of a sudden she pulled up on an empty chair! Yes, by the time Will got a photo, I was holding on to her, but she did it by herself. She was so proud, and we were so surprised! Now she's pulling up all over. The older children are not too happy that they can't play on the couch without interference anymore.


(To change the subject. . . we haven't heard anything about the apartment. Will waited all day for the landlady to call, like she was supposed to. I guess he'll try calling her soon. We're perfectly happy here with the Sobies, and I'm sure we'll get moved soon enough. UPDATE: she just called. The neighbors are changing their plumbing, too, so it's taking a little more time. Since the apartment is on the third--middle--floor, that's best. They've been working for two days, and they're almost done now. We'll probably be able to meet with the landlady on Saturday.)
Posted at 20:33 6 comments:

By Phyllis
First, about the apartment. . . someone asked, "So, are you all moved in yet?"

Ha! The landlady decided that she was embarrassed to have Will help her clean things out and that all the plumbing needs to be replaced. So, we didn't do anything on Saturday. Now she says Thursday, but we don't know if that means we can come see the apartment and clean, or if she'll be ready to have us start moving in then.

Then, I said I'd explain the video more. Oksana's father was here on Saturday to work on the well that they've been drilling. Scott was busy, so Will got to be the official helper. The rest of us watched. We learned that drilling a well by hand is hard work! They have a drill on the end of a shaft, that they lower down in, adding sections to the shaft as it goes down. When it reaches the bottom, they clamp a handle on to it, turn it a few times, then drag it back up--taking it apart as they go--and scrape the clay off of it. Then back down, and back up, and so on. After they had worked for quite a while like that, Anatolii Vasilivich made some measurements, did some figuring, and grandly announced, "And so, you and I have gone down. . . 10 centimeters!" But that was enough that now they needed to drive the pipe in deeper; that's the video I posted. They pounded it in deeper with Will pulling the rope to raise and drop a pipe that Anatolii Vasilivich guided. (Unfortunately, now it looks like the main pipe is broken and everything collapsed. Oksana called around to see if they could hire anyone to come fix it and finish, but no well drillers will work in this village. I'm sure they'd appreciate prayer for wisdom and success!)

I wanted to post photos, but they're not going.

We're doing well here and thoroughly enjoying every day! Right now I'm feeling a little foggy, though. Eight children in one house, with the oldest only seven years old, can do that to you!

It is so wonderful to be here! The weather is just about what we left behind in North Carolina, and everything is so beautiful. Our children are really enjoying their new friends and this busy household. Between our family and the Sobies, I think we have ages 7, 6, 5, 4, 3, 2, and two 7-month-olds. Funny thing: after almost three months of refusing to speak English in America, Raia is conversing in English with everyone here.

Sunday we went to church in Dneprorudnoe, which is where we'll be living. (Right now we're in Balki which is close by. For some reason Dneprorudnoe isn't on the map. I've been reading about the city. There are about 20,000 inhabitants. It's a new city; started in 1959 to house the miners. That's a change, after living in the Golden Ring area! The mine is the main industry here.) Everyone at church was very excited to meet us. Hopefully, we'll be able to help there.

On Monday Will started out with a truck driver to get our things from Kovrov, but only got as far as the Russian border. They wouldn't let him in, even with a valid visa. Apparently something came up in the computer when they typed his name in. So, he got back here on Tuesday morning. Either friends will bring everything to us, or, more likely, Will and this truck driver will get documents that will let the driver bring it all by himself.

Apartment. . . when I started writing, I would have said that we were still looking. Will just called and said that he found something, though! It's bigger than anything we've ever had before: three rooms (by Russian standards; in English you would say two bedrooms and a living room.) TWO bedrooms! Will didn't give many details, but he did say that the landlady sounded willing to clear some stuff out. Please pray that she really will. In the past I've struggled with cluttered apartments, where we have to fit our own belongings in around everything the landlord's former wife or landlady's dead parents ever used. We'll be meeting with her to work on that Saturday. 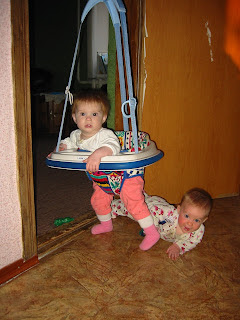 Thanks for your patience with us while we're getting settled here! I've gotten lots of questions, and haven't had time to answer any of them. Hopefully this will help. Believe it or not, I've been working on this post for three days now.
Posted at 13:47 8 comments:

By Phyllis
The whole trip went very smoothly. Thank you for praying! We got here very late last night (early this morning, actually). Today we slept most of the day. It's wonderful to be here!
Posted at 20:31 12 comments:

(This is interesting reading. It was the bulletin insert last week at Circle.)
Posted at 20:02 3 comments: