By Phyllis
While I was getting lunch ready, I saw this go by. (Photos below!) I wasn't fast enough with getting Bogdan to the window, so I threw his coat on him, and made Will run after it with him. Bogdan is fascinated with animals these days, and almost all his new words are animal sounds right now. Although, he's still pretty confused there. Yesterday he told Will that the three bogatyrs in a book of ours were riding on "moo." Anyway, I knew that he would love to see a real one! 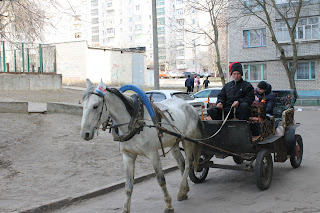 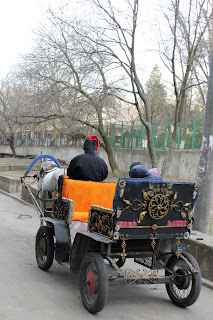 There were some guys we know playing ping pong out there, so Will and Bogdan joined in for a little while. See how quick I was with getting Bogdan dressed, though? 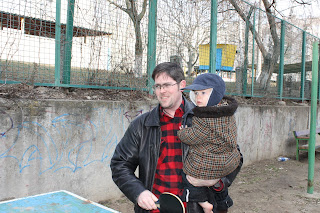 I did put socks on him! But I didn't get as far as boots, and he wasn't wearing his tights, so a sock fell off. Will was trying to hard to hide that naked foot.

And then the photos below are from the first part of our morning. From the time he got up today, Bogdan was intently preparing for some kind of expedition or something: 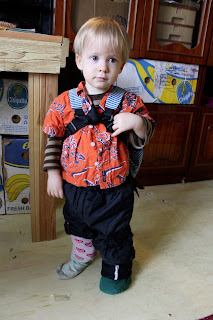 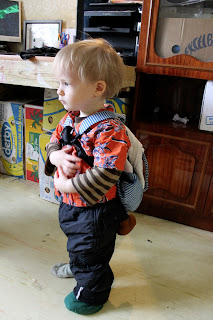 By Phyllis
Our children have been begging for a dacha day, even though it's been cold and grey almost non-stop. I had said that we would go after Papa returned from the summit in Kiev. Then it turned out that he had to go to Kiev again. It got to the point that they were actually climbing the walls at home: 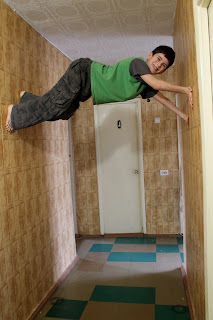 So, yesterday we finally went! Unfortunately, someone stole the electrical wires from a bunch of dachas, including ours, which complicates cooking a little. (In Russia the dacha community we were a part of actually collected the wires every winter and only put them out in spring. I guess that isn't as weird as it might sound.) It was so cold yesterday that we were all quite content to spend most of the time huddled around a fire anyway, though. 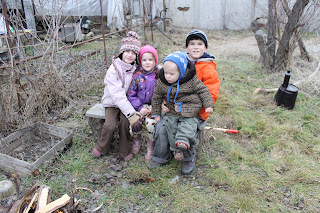 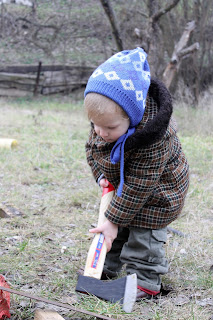 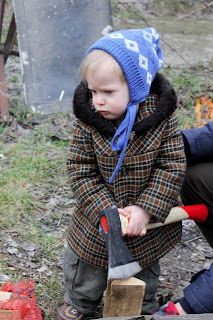 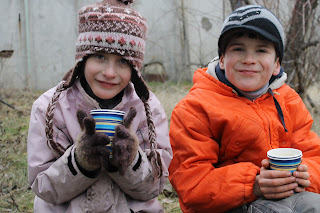 It was all very fun and satisfying, and we didn't quite freeze. Well, Will and I were satisfied with our outdoor time. Everyone else was very grateful, but they are already saying that they want to do it again next weekend.

Oh, on the way out, we took a taxi, and Bogdan hadn't been in a car for so long that he was terrified of the speed that made everything seem to be rushing at him. Before we moved to this apartment, we rode in a taxi almost every week to get to church. He's already forgotten what that is like. On the way back, he walked almost the whole way with his own little legs for the first time ever. I left with him, to get a head start before dark. Walking along the paths with just him was the highlight of the day (of the month!) for me. He was exhausted afterwards, though. After barely dragging through a bath and supper, I told him that it was time for bed; he flopped down on the floor, right where he was, ready to go to sleep.
Posted at 16:30 2 comments: 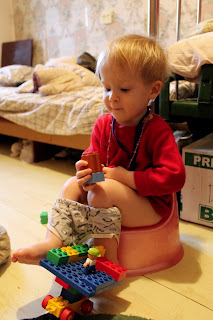 Bogdan is finally potty trained! We've worked on it off and on since he was born, but it finally clicked last week. I still have him in diapers at night, although he's been waking up dry some mornings already. I was used to daytime potty training around age 1, and then nighttime just followed that about 6 months later for our other children. This one decided to be different, but maybe because he's so late, he'll do both almost at one time? Anyway, he clearly tells me when he has to go and gives enough time that we don't have to run, so I say that he has arrived.

Bogdan is really a funny little guy, and he loves to clown around and make us laugh. In public, however, the most common comments we hear are about how serious and even sad he looks. A few days ago we had a friend visiting, and the older children were bragging about Bogdan and his new underwear. When he heard what they were talking about, Bogdan marched off without making a sound, came back with his potty, sat on it and did his business, then stood to the side so that Katya could see what he had done. She cheered and congratulated him, but he never cracked a smile or said anything. It was all so dead silent and serious that I found it hilarious.
Posted at 14:24 2 comments:

By Phyllis
If you're on Facebook, you'll have to forgive me for reposting this: 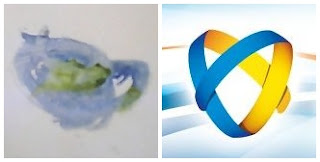 The picture above is something Bogdan painted while he and I were watching the summit that Will attended in Kiev. I thought Bogdan's doodle looked remarkably similar to the logo of Ukraine Without Orphans, which is what we were seeing on the screen in front of us as he worked. (Hmm. I should have rotated Bogdan's version a little. That would have made it even better.) Some friends did suggest that it might just be a cup of Ukrainian tea, and that is also highly likely.

Anyway, Will left on Tuesday for the Eastern European Summit for Pastors "Defending the Orphan, Changing the Future" in Kiev. It went all day long Wednesday and Thursday. Then he had a free day, and he came home yesterday. We had originally planned to go all together, but now I'm really glad that we didn't. About the time Will left, Raia started feeling bad, and she spent the next few days down with a stomach bug. Also, they broadcasted all the main sessions online, so we got to see and hear a lot of what went on there, from the comfort of our own living room. Jaan particularly enjoyed the times that the president of Compassion International spoke. I was really excited that I had a few people step up to help me here; I had been feeling kind of isolated since we moved. They even took the three older children out for a whole morning and fed them lunch one day!

Many people were praying that this summit would help us to decide where we're going next. Thank you. I can't say that God spoke directly to Will there; we don't have any instant, definite decision to share. However, Will did get to meet many people, hear about other ministries, and collect contact information from all over Ukraine. He also said that he feels like this conference confirmed and strengthened his desire for us to be actively involved in orphan ministry. Please keep praying with us as we sort through all the information and contacts from the conference and continue to seek God's direction. We're so thankful that he had this opportunity!
Posted at 17:46 3 comments:

The things she says

By Phyllis
Last month I wrote down a few things Asya said that made me laugh, but then I didn't post them. Here they are now:
She told me that she was wearing "two portions of socks."

An attempt at saying in English that she is my baby: "It is I you baby."

Sometimes she just babbles on and on. After finding a bit of fluff or something: "I found a feather from a hamster. May I give it to God? Poor people would like to decorate their homes with it...."

A few days ago she told me that her very, very favorite books are Ruslan and Lyudmila and Tarzan of the Apes. Maybe not terribly funny, but I loved the combination.
Posted at 17:11 2 comments:

By Phyllis
I can't blame all my silence here (and in email) on this apartment, but I'm discovering that it really is part of it. In our old apartment, we actually had an extra room, where the computer was out of the main area of noise and motion. I could sit and think and read and write. Not so here! We definitely don't have an extra room. Or any extra room. I really can't think with everyone bouncing off me while I sit here. I also can't be here before anyone is up in the morning like I used to. So, I don't end up writing much at all.

Of course, in some ways that's good. I don't have to worry about being glued to the computer, instead of to my children.

You all just get to hear less from me. Sorry about that, but I'm sure you understand. I'm still aiming for one blog post a week, if possible. But if I don't get to that, and if you don't get answers to your emails, you know why.
Posted at 20:59 4 comments: