By Phyllis
Yesterday's concert was amazing. It's hard to believe that Jaan has really graduated from music school!

And our internet is fixed. Nice.


Today we have photos from May 9. Remember last year's Victory Day picnic? This year we were so excited to go again. Then, at the last minute it was called off because of an early-morning thunderstorm. The message from the church said that they had to cancel renting the buses, but anyone who had their own transportation and wasn't afraid of the weather could still go. We don't have our own transportation, but we're not afraid. Plus, we had all our food prepared and some very disappointed children. So, once the storm rolled past, we set out.

The very first thing we found when we got to the forest was a beautiful, bright green lizard. 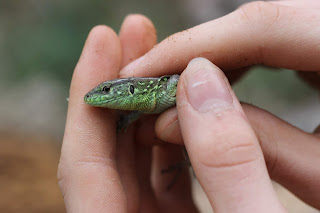 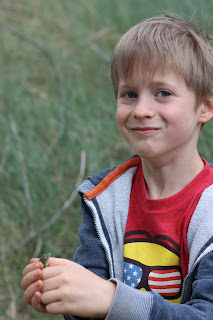 While we were observing the lizard and resting, Will noticed that a dead tree seemed to be making noise. Something was scratching around inside it and squeaking and chittering. He called the kids close to watch and take pictures. When he pulled the bark back bunches of bats flew out at us! 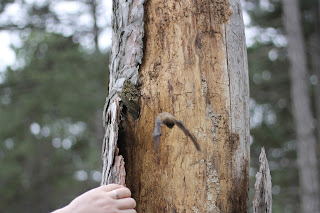 Most of them flew away right off, but two didn't. We were afraid they were hurt, but no, they were just very sleepy. And maybe they were babies? After a while they did wake up and take off. 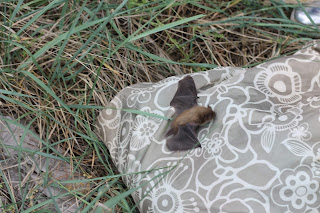 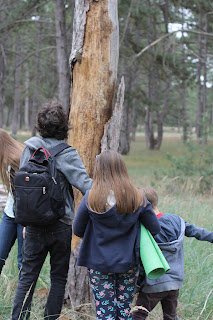 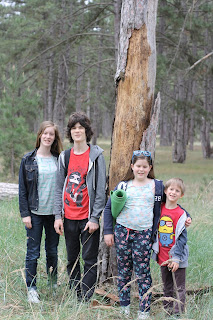 Then we walked on to the same picnic spot as last year. Some were hoping that others from church would be there, but no one else showed up. At least, not at that place. We had a wonderful day with just our family, though. 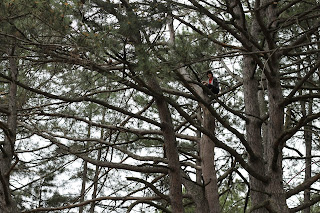 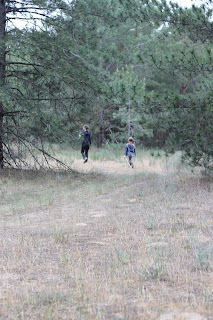 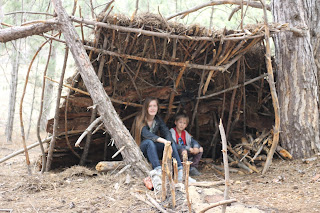 When it was time to go home, we headed out to the highway. I was hoping there would still be marshrutki running, and I think Will was trying to figure out how to get a taxi to find us. Raia and Asya sang all the songs they know at the top of their voices while climbing on the bus stop shelter. 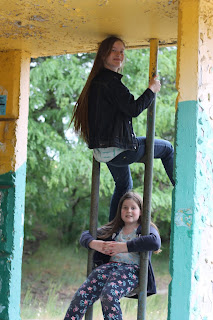 After we had waited a while, a friend's van flew by. I recognised it, but Valentine wasn't behind the wheel, so I wasn't sure. He was resting in the passenger's seat, though, while his friend drove back from their dacha, and he saw us. They turned around, came back, and gave us a ride to the city. That was a very nice end to a very nice day!

By Phyllis
Most of the recent photos we have are from big events. These aren't. They're just happy moments at home.

These first few are from a day when Bogdan was the only child at home and bored. So, he went and got his school nature journal and sat outside with me to draw while I read. 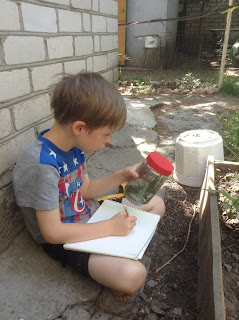 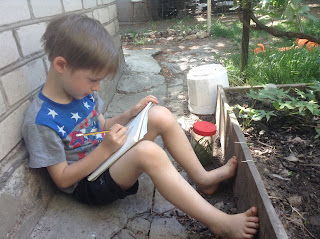 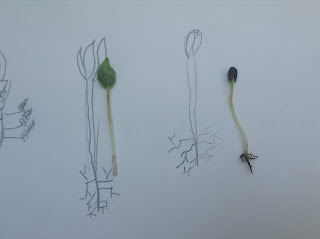 Will made a swing for the kids, and they're loving it! We had all been puttering around the yard and working on various projects when I took this photo through the window. So many things here that make me happy: Will and Bogdan, our little neighbour, my sweet potato plants, green grass.... 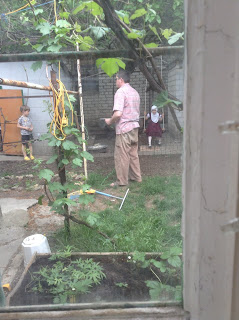 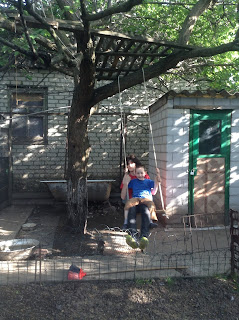 They found a newly emerged butterfly! 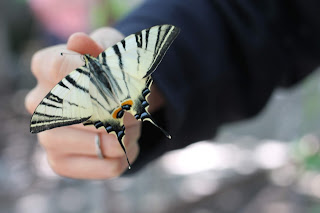 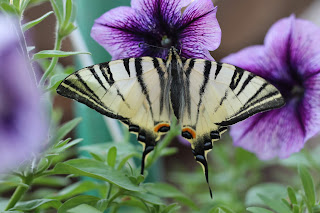 By the way, Jaan's final graduation concert is tonight.
Posted at 17:16 3 comments:

By Phyllis
This is from March, which of course is well before the month of May that I wanted to write about, but photos and videos didn't really come out until April, and then somehow it was already May. And, since we're having internet trouble, it's easier to use what's already uploaded, so this is what we get today.

March 31 was the second Kherson robot battle. You may remember the first? Jaan has continued to love his robotics classes, and this time he won the contest! Raia skipped art class to cheer him on. Bogdan was there since he is Jaan's shadow, and some of Jaan's church theater friends came, too. I like how this photo of mine matches up with what the official photographer got: 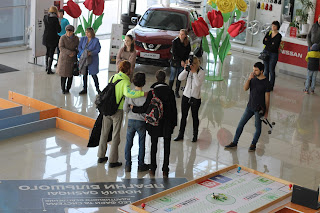 (The first robot battle was held in the old gym at a physics school, where the--ironic!--problem was no electricity. This time it was a fancy car dealership where the bright sunshine and shiny floors confused the robots.)

It was pretty exciting at the end, because Jaan had actually placed fourth and was fine with that. He was already off doing something else when they called him back up to compete in the final rounds for first through third places. One of those robots had broken down, so his took its spot... and won!

Here is the official video from the contest, and there are photos here and here and elsewhere, if you keeping scrolling through Robohouse. This is what I posted on Facebook right afterwards, too.

By Phyllis
I keep wanting to write, and then not getting around to it. We're already close to the end of May; it has been a wonderful, full, happy month. Maybe soon I'll be able to add some photos here, just as a record of some of the month. For right now I only have a few photos to share from our librarians. They organised a police station field trip, which Bogdan, Asya, and I greatly enjoyed. I especially love the picture of Bogdan. He seems so little! Usually he looks all grown up these days, but police gear really dwarfed him.

An added bonus was that our little group joined a group from the city orphanage: older kids who were finishing up a police course. We knew some of them from English camps. 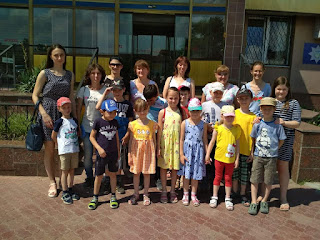 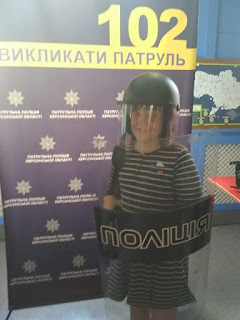 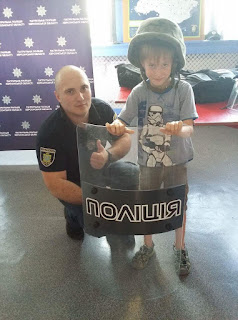 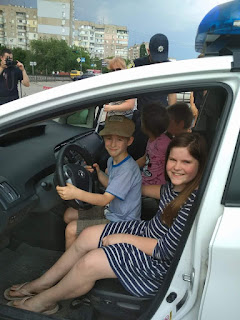 We're having internet trouble now. With the long weekend for Pentecost, it will be at least Tuesday before someone can come fix it. We do have a connection sometimes, but it's the kind where you start a page loading or photo uploading, then go do other things while it works. Better than nothing, though. I started this post when I got home from church, and I'm finishing it as I take a shower and get ready for bed.
Posted at 21:42 2 comments: 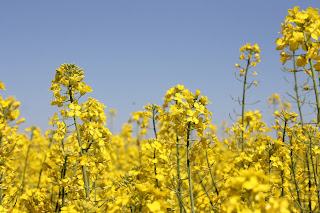 We have been here for a whole ten years now. This is one of the first family photos I could find of us in Ukraine. It was taken in the fall, and we arrived in spring, so it's not exactly ten years ago, but close: 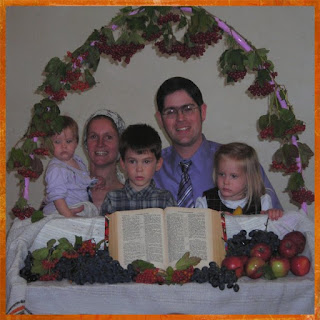 And then here we are now:

Someone remembered that when we had been here for five years, we made a cake to celebrate, so of course they wanted another one now. 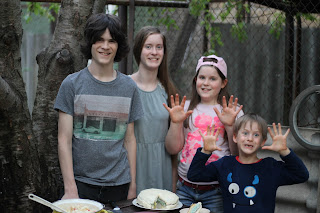 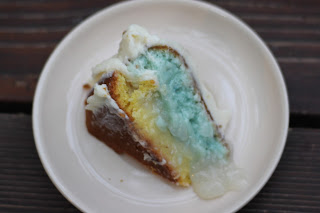