I love our art school! 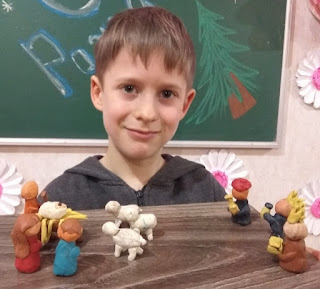 Saturday, when I was in Kyiv, Will had to be at Migration, Jaan and Raia were busy with youth events, Asya had her last art classes before the break. What to do with Bogdan? She took him with her. And, instead of just making him sit and wait for her, apparently they pulled him right in and let him be a 6th grader for the day. 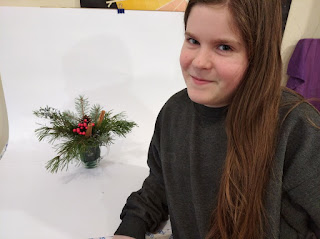 Then, yesterday, when four of us were sick or plain exhausted, weather was icky, our neighbors were leaving for Crimea, and Asya and Bogdan were going stir crazy, I remembered that art school was doing some extra master classes. One was starting in about an hour. I called and registered Asya. Again, Bogdan was officially too young, but they said that of course he could come, too. After one class, Asya called me and asked if they could stay for another. I had only sent money for one, but they got permission to pay later. So, they were two very happy children! 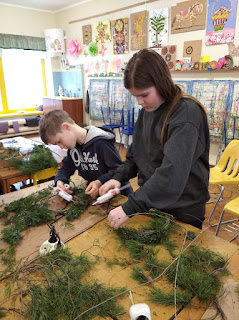 By Phyllis
I'm home after another trip to Kyiv. My blood tests looked good (except for anemia), and at the end of the day I got the Keytruda. I had a really rough morning, though. At first my blood pressure dropped, and I passed out and felt awful. They gave me an electrolyte IV, before we could even get down to business. But it worked out, and I was thankful again that everyone is so nice there! The doctor added a medicine for diarrhea to my routine, so hopefully my stomach will be happier this time around. Tentatively, I can say that it already seems somewhat better. I ate like a queen while I was in Kyiv; I tried a fancy Chinese restaurant on Friday, and Saturday I had a holiday special turkey dinner at our favourite cheap restaurant chain.

While I was in Kyiv, Will found out really bad news here. Our residency comes up for renewal January 21. We were on top of things and started the process early, so that everything would be ready to go in on January 2 when they reopen after New Year. But their schedule changed, and because of that, Friday was the last day we could submit documents. It was already too late in the day then, and I wasn't present. So, after a sleepless night for the wonderful lady who does our invitations and lots of appeals the next day, the final decision is that we have to leave Ukraine, apply for new visas and start the residency process over again. This is the very short, unemotional version of it all. It's not short and unemotional in real life, though.

Also, I have a cold, and Will's not feeling great.

By Phyllis
Well, I haven't been asleep all the time for the past few weeks, but I certainly haven't gotten around to writing. I said I would write about the fun our kids had when we were in Kyiv, so I'll try to jump back to then. When we walked out the door, Jaan and a friend were in the kitchen making brownies, not without adventures. They had a party for their church theatre group the next evening, so they were preparing for that. Apparently the brownies turned out wonderfully, despite the adventures: yummy and even decorated with an inside joke for the theatre. I got photo updates and gave advice long-distance off and on throughout the process.

Asya had plans to spend the night with a friend, then go to a music contest first thing the next morning. She was very happy about all that.

Friday evening Bogdan also had an extra ensemble rehearsal at music school. Before I heard about the party, I had planned that Jaan would take him to that, sit and wait for him, then bring him home. Asya was going to be gone, Raia had an art class, so the boys would have a quiet evening together. Hah. But they had fun. Jaan dropped Bogdan off at music school early and arranged that a friend who lives at church would bring him over afterwards. Bogdan was so excited to get to be with Jaan! At the theatre party!

After art Raia went home with friends who live right by the church, to wait until Jaan's party was over. As we were getting on the train in Kyiv to come home, we got a frantic call from our wonderful neighbours. They had tried to check on our children before bed, but nobody was home. When I called the kids right after that, I told them to be sure to make noise when they got home, so that Aunt N would see them and know they were okay. It was reassuring to me to get that call, even though I was sorry to have scared them.
Posted at 13:01 2 comments: 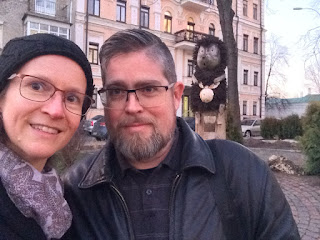 Thank you so much to everyone who was praying for us! Two night trains in a row makes for a hard trip, but still everything went smoothly. Yesterday morning our train got in to Kyiv late, but I was still on time for my scan. I don't like those scans because of how much the contrast hurts, but this time I didn't even feel it. After the blood tests and scans, we had breakfast in the nice restaurant at the clinic, then set out for a walk. They called us back almost right away, though, to let us know that our results were already in and my doctor was ready to see me.

I posted the basic idea on Facebook already, so there wouldn't be any suspense, but the details are that the biggest tumour was 47x38 mm in August and is now 38x25 mm; next biggest is not visible (but I can still feel something there, so we're a little puzzled); last one was 24x18, is 13x9; lung spot was 7 mm, is 5 mm; all affected lymph nodes are slightly smaller than they were. And my blood tests were decent, so we could do another Keytruda treatment, after I rested and drank water for a few hours.

Honestly, I was surprised that everything pulled together like that. Last week was really hard, and I thought it meant the end of Keytruda, or at least a break. But, we got a really helpful, really optimistic gastroenterologist in Kherson on our side, and all her supplements and medicines are making a difference. (So I can forgive her for an awful procedure she had me go through to get diagnoses!) Which means we keep going.

My next appointment in Kyiv is set for December 27. 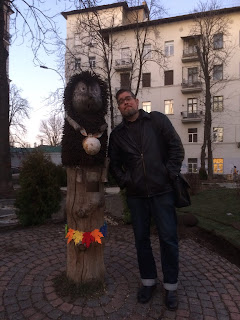 After the clinic yesterday, we still had some time before our train, so we explored a little and enjoyed a nice dinner.

And then we came home. Oh, almost every time I've travelled back and forth, there has been someone I know, or at least am acquainted with, on the train with me. This time we were waiting to board, scanning the crowd, and joking about who it would be this time. It turned out to be the bookkeeper for the Christian institute and our church. Not only were we on the same train, we were in the same wagon. Usually we only see her once a year--for about a week--while she works on our residency renewal. Her daughter was recently diagnosed with cancer. We've been praying for each other from a distance, but it was nice to talk a little now.

I am so, so thankful: for good results, for good treatment, for friends and people we don't even know who are making this possible, for my home and family, and for so much more. 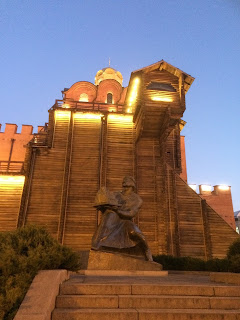 Our kids did well and had lots of fun while we were gone, so I'll try to write about some of that in the next few days. If I can get my eyes open.
Posted at 20:46 6 comments: