By Phyllis
Is being ready for school an impossible dream? I do remember some years--back in ancient history--when I had time to prepare to my heart's content and have everything ready before we started. This year I mostly just feel mentally unready. It seems to me like summer should just be getting going now, not ending! The weather and electricity are helping to get me in gear today, though. It's cooler and darker, so it feels like autumn, and the electricity is out, so I'm working by cozy candlelight. (So, no photos today either.)

While I've been mentally unready, I have been able to sort things out physically a good bit. When we first moved to this house, we moved right at the beginning of a school year. Our school stuff pretty much got dumped into our room, and everything has been almost the same since then. Now I've sorted it out some, and it looks better.

Other prep is actually pretty easy, because a while back I gave up fitting the work of a school year into an actual school year. Everyone moves at their own pace, even if it's faster or slower than "average." When a school year ends, we stop, and when it starts again we pick up where we left off.

What is really different this year is that Bogdan is starting official school! I am going to be doing a mix of AmblesideOnline Years 0 and 1 with him. Right now we just have a checklist of three things for him for each day, and we'll add to it slowly as he is ready. The list is reading lesson (still working on Russian there), one AO reading (first Year 0 books, then Year 1 readings later on), and working on something from this list. Of course, he'll still be with us in "Morning School,"* and he gets a lot out of that. Also, he will be continuing at art school, and he's going to try participating in the church children's choir with his sisters. I say "try" because both he and I aren't sure how he'll do with the long practices during nap time and sitting still on the stage. He'll probably love it, though, and I hope it will make up for not having the preschool singing and rhythm classes that he loved so much last year.

{In the next part I almost hesitate to say which specific AO years we're in, because they sound like grade levels, and then our kids are "behind." I'll just repeat something that is said often: they're not necessarily equivalent to grades. Also, something that I love about AO is that it is so rich that even the earliest years are a feast. I have considered jumping forward some, but since we're enjoying it all so much, moving along at our own pace still seems just right.}

Asya will continue where she left off with AO Year 2 Term 2 and MEP for math. She will be in fourth class at art school. This is her second year at music school, so she will be moving on from recorder to real flute.

At home Raia will be working on AO Year 4 and MEP. At art school she's in sixth class, and she'll be joining the culinary class that Asya loves so much. I think she's in her third year at music school? Or fourth? Everything there should be about the same as it was last year, but we haven't met with her teachers yet to know for sure.

Jaan just has the tiniest bit of AO Year 5 to finish up in our first week back, then he'll start Year 6. He wants to stay with Khan Academy for math. The two of us do Visual Latin together. This will be his last year of piano. (Wow!) He also has a computer and robotics club he really loves that will be starting up again soon. And theater group at church.

And last but not least: I'm going to try art school! The adult class meets twice a week, but I'm just signing up for one evening a week. We'll see how that goes.


*Morning School is what we do all together every day. Maybe I can write another post about that. It's worthy of its own space. :-)

By Phyllis
I'm still trying to choose just one or two photos to summarise each day. In our second week in North Carolina, we had...

Monday: visiting our friends' farm and market. These friends adopted from Ukraine last year. They had a new immigrant family staying with them... from Kherson. And we actually knew each other! Our kids, and our friends' kids, and the immigrant kids had a wonderful day together, running around, speaking Russian, and enjoying piglets, kittens, ducks, goats and more. 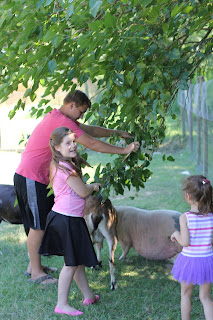 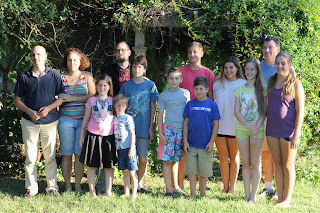 Tuesday: brunch with one friend (no photos from that), visit to the library, and dinner and music with Zach and Aimee. 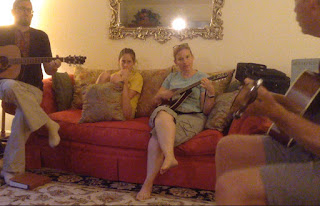 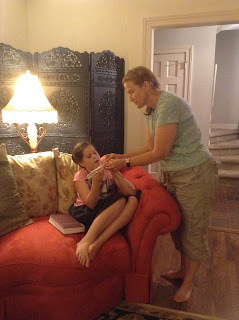 On Wednesday we drove to a park, while Anna, Jaan, and Raia biked there. Then, when the ones on bikes went on further, the rest of us enjoyed a great nature museum there. That evening we went to dinner and Bible study at church. 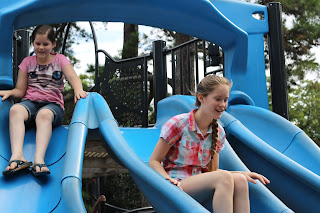 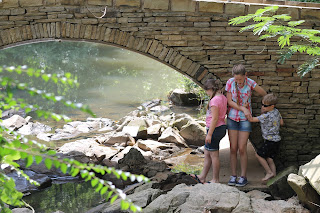 Thursday: Aunt Abby arrived, we celebrated all the birthdays together, and went out for barbecue. The grandparents took the kids to an indoor water park two days in a row, and everyone loved that!

Friday evening we drove out to a fish camp for that cultural experience. The only thing I took a photo of there was Ukrainian--Roshen!--candy in the candy store, out in rural North Carolina, so again you'll have to click through to Baba Julie's photos.

The extended family came over for an open house on Saturday. The various kids especially enjoyed getting to meet each other. I took this photo of them (and Aunt Abby; does she count as a kid?) off Facebook: 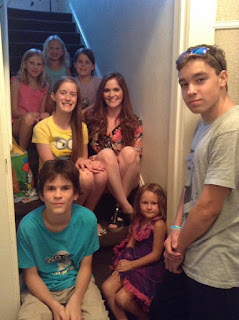 Sunday: church, Mexican lunch afterwards with friends and family.
On Monday we packed. A family that we had gotten to know while they were adopting in Ukraine came over that evening: 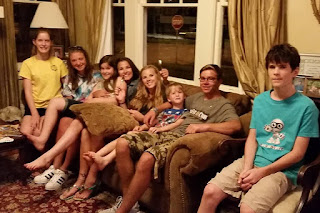 And Tuesday we flew out.

These four (five?) posts are the bare bones summary of our trip to the states. Of course, we have more photos, and, even better than that, many wonderful memories to treasure, but this was just a taste to share online. We're so grateful that we got to go and that we got to spend time with so many of our relatives and friends.
Posted at 15:10 2 comments:

By Phyllis
Now that we've been home for almost two whole weeks, we're not really jet lagged anymore. I think the jet lag turned into heat lag, though! I told Will that he didn't need to set up our air conditioner for the short time before autumn, but now I'm not sure that was a good idea. Oh, well. Surely it will cool off around here soon? Today's clouds do seem promising in that direction.


So, we arrived in North Carolina late on July 23. The 24th was full of bike riding and other fun around the house.

On the 25th we went to VBS and loved it! I thought we'd just visit that day, and that would be it, but our kids (even Bogdan, who had been nervous about all the English and unsure about being away from me) wanted to go back every day for the rest of the week, with or without us. There's a slideshow from the whole week here. 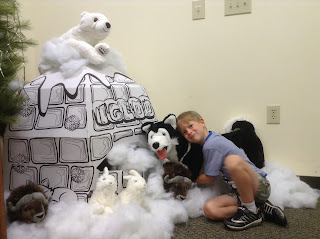 On the 26th we had the Lyles over for dinner, and they're probably absolutely the only people I didn't end up with at least one photo of. Sad. I'll have to get one from them for our own memories. It was great to share with them and eat a Ukrainian meal together.

The next day the water guns and hoses came out for a water war: Granddaddy against grandchildren, I think. 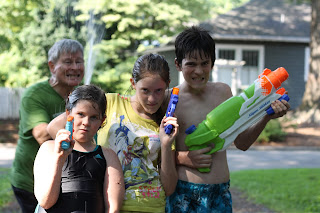 That evening we had dinner at our pastor's home. From then on, every time we told Bogdan that we were going to someone's house, he replied that he really would rather go back to Pastor Donnie's (but he enjoyed all the other visits, too).

July 28th: Jaan and Raia went to a biking breakfast with Aunt Anna, and then there was more VBS, more water fights with Anna this time, followed by dinner and croquet with Kelli and Danny.

On July 29th Anna was riding in a big bicycle event, so the kids got to visit her there, then they went on to the raptor center and lunch with Grandaddy. Raia didn't take her camera, so I don't have photos. That evening Will spoke about Agape:
Sunday morning Will and I spoke at church, our kids played music, and then there was a potluck and VBS play afterwards. 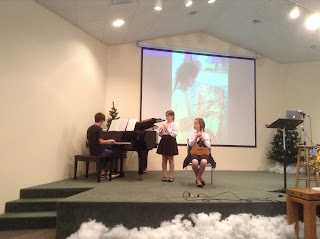 Elizabeth had us over for our usual Sunday evening movie and popcorn dinner. It was so good to see her again and catch up a little! 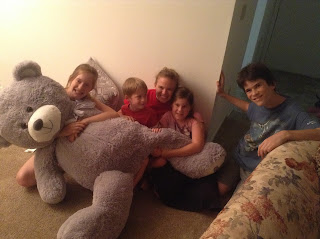 By Phyllis
The best part of our trip was time with our extended family, and these photos are treasures!

I obviously haven't posted photos from North Carolina yet. I need to sort them. It's too hot to sit at the computer for long, and I haven't had time anyway. It was definitely a great visit. If you're on Facebook, there were plenty of photos from our relatives and friends there already.
Posted at 14:08 2 comments: