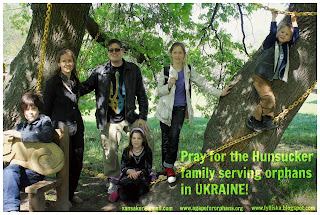 (If you click on the photo, you'll get a version big enough to save and print out to hang on your refrigerator.)


About us
In September 2013 we moved to Kherson, Ukraine to work with Agape, an orphan ministry. Will works in the office, mostly doing correspondence and translating. I (Phyllis) visit a special needs orphanage across the river from us and serve the children there. I get to help a missionary who has been working there for years, and I'm especially excited about her project of building homes for the kids who age out of this orphanage. There blog updates about that now at this link. Her organisation that we have set up in Ukraine is called Promise.

Will grew up in Charlotte, North Carolina, and I am from Central Florida. We met at New Tribes Bible Institute in Michigan. Before we knew each other, Will had spent three school years (1994-1997), teaching English as a ministry in Moscow schools. I had loved Russia and wanted to live there since I was little. My first time in Russia was a summer trip in 1999.

In 2001 we got married and moved to Moscow. For our first two years, we taught English in a private school, and were active members of Resurrection Church. During the summers we helped with camp ministry in the Vladimir region.

Our first child, Jaan, was born in Moscow in 2003. When he turned five months old, we moved to Kovrov, a city we had come to love during our times in the summer camps. Raia and Asya were born in Kovrov in 2005 and 2007. We were able to serve there as part of the local church for four years, helping the pastor, taking part in music, children's ministry, orphanage work, and whatever else was needed. We also worked with Gospelink to coordinate sponsorships for the local missionary-pastors around us there.

In 2007 we started having document problems, which led to us having to leave Russia, with no way of returning for at least five years. (The very short version of that is when Asya was born, my visa ran out before we had a passport for her. The local authorities, who had been wanting to get rid of us for a while, took full advantage of our mistakes and pressed charges against me. After three times in court, the final decision was deportation.) We had to leave at the beginning of 2008.

May 1, 2008 we began a new chapter in our lives: we moved to Ukraine, and we sure do love living here! We spent five years in Dneprorudnoe, in the Zaporozhye region. Our sweet Bogdan was born there in 2011. We were part of a local church, doing whatever we could to help there. Will was officially the youth leader, and he also filled many other roles unofficially up until we moved to Kherson and Agape.
More recently we had yet another chapter show up in our lives, one that we probably would never have chosen, but one in which God really showed us his faithfulness and mercy: I got a very serious cancer diagnosis in 2019. That story on our blog starts here. After about a year of fighting hard, I got the all-clear, but we still pray about that with thankfulness and hope every day.
Also, anyone who just happens to find us here, might be surprised to see the Crimean Tatar theme that pops up in what I write every now and then, plus extra children in our photos. We rent half a house, and a wonderful Crimean Tatar family rents the other half. I don't often post photos of their kids or use their names, since they're not ours, but they have a big sister (age 10), a big brother (age 7), and the little queen who rules our whole house. Living with them has made us aware of their culture, language, and history.

We are sent by our home churches, Grace Bible and Circle Community, and supported by our wonderful friends there and elsewhere.