By Phyllis
Last Friday I got to go on a whirlwind trip around this region. My friend was picking up one of the former residents of "our" orphanage to take her to the USA for medical treatment. So, she turned that into a day-long journey to visit many others who have been moved on into other institutions.

We left at 7:00 to go to Kakhovka and get Oksana first. It took a while there, because we had to finish up complicated paperwork and wait for many different officials to sign forms and check documents. Oksana was mostly packed, but we also helped her finish getting her things together for her big trip.

Next we went on to Kairy, where Slava and Sergei are. On the way there, I was able to translate for my friend while she told Oksana about the homes that are going to be built soon. Since the medical trip to the states is also going to be a fundraising trip for those, she had to know what is planned. Her eyes got bigger and bigger as she heard all about it. A home for her to live in?!?

When we got to Kairy, I asked to meet someone in charge. Last time seemed a bit strange, in that no one introduced themselves officially, and we didn't interact with any of the workers. They just kind of threw the boys at us, and then snatched them away again in the end. So, at my request, the head doctor came out to talk to us. He seemed nice, and he really surprised me when I was asking questions. When an American volunteer stands there and asks what needs they have and how we can help, honestly, I'm afraid that I would usually expect a long list and big requests. He didn't do that. He told us just to keep visiting and supporting "our boys." He also assured me that we can bring them whatever we want to, and that they'll be able to keep it. Beyond that he gently told us never to go inside again (like we did last time) because "psychos" live there, and it's dangerous to our lives and health. But he was nice about it. 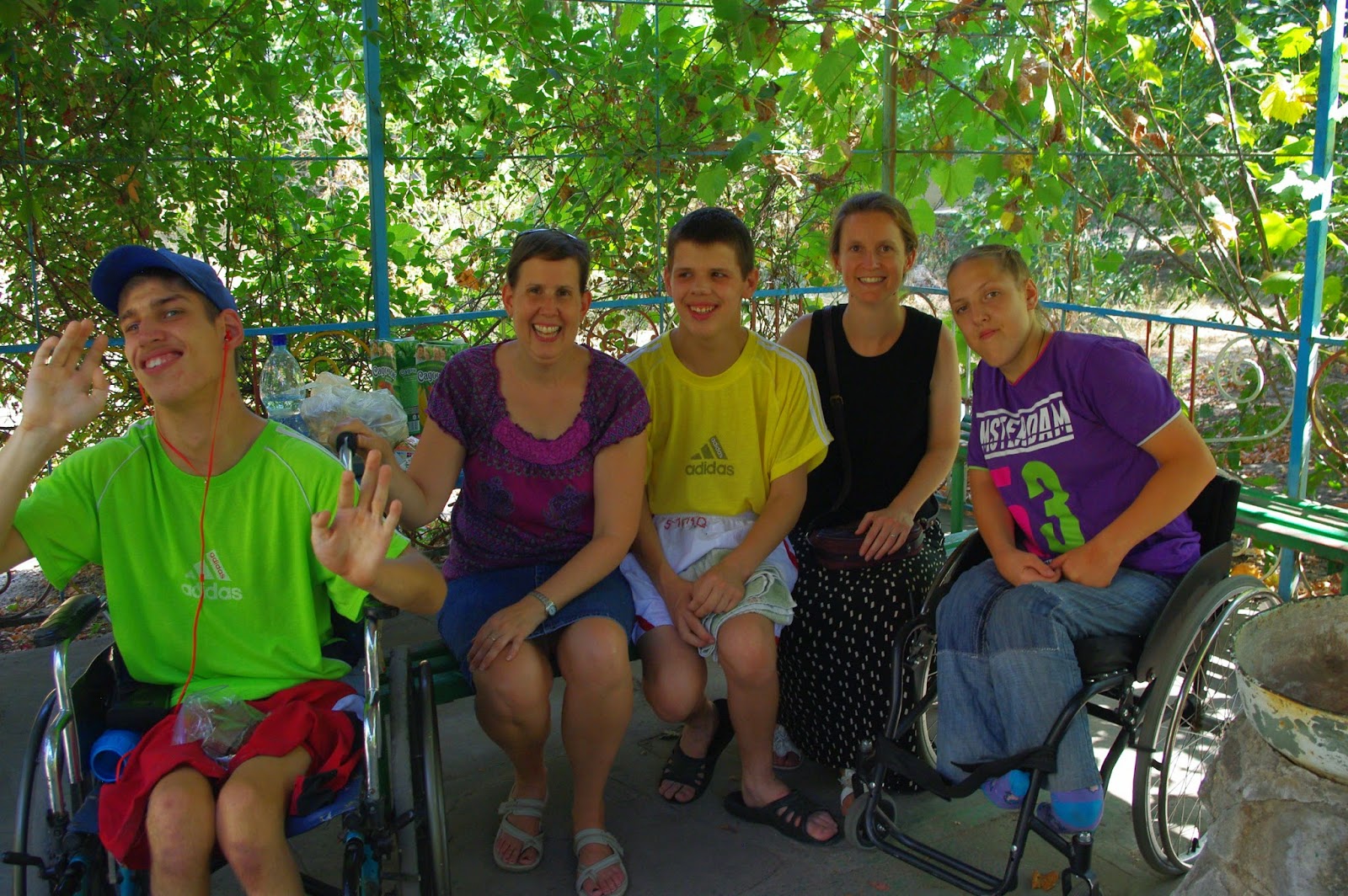 Then they brought the boys out to us. They looked so much better! They're in separate groups now, and they seem settled and happy as can be expected. Slava is down on the first floor now, so he can get outside with his wheelchair. Sergei greeted us with his usual hugs and yells. "Uncle Sasha" (my friend's project manager) had brought a little radio as a gift, and Slava was so excited to have it. He had me take him around the grounds to show his new treasure to all his friends. Sergei was more interested in the juice and cookies we brought. Both boys were glad to see Oksana, who had always been like a big sister to them. There was much more laughter and smiling this time than last. Sergei even joked, in his own way, with gestures, when the nanny came back to get him at the end of our time together. He clearly communicated that he wasn't going with her, he was going to stay with us! But it was with lots of smiles and fun. (As opposed to last time, when he wasn't even trying to communicate.) And he obviously felt comfortable with her.

After that we headed on to Dnepryani, where there is another home for mentally challenged boys and men. I only knew a few of them before this, but it was good to meet others who had come from "our" orphanage earlier. Of course, they were also thrilled to see Oksana and my friend and their Uncle Sasha. They gathered in a room with us, and Oksana encouraged them and told about her upcoming trip. One of the boys emphatically signed that he wanted to pray, so we had a time of prayer for Oksana, her travels, and all the boys sitting there in that home.

From there we bounced on to Tsyurupinsk. It was the hottest day of the year, and the roads are always bumpy, and by this point we were all pretty wilted. But, Oksana was very excited to be going back to the place she considers home, and her excitement revived all of us a bit. There was lots of happy screaming to greet her when we arrived, and we spent some time just visiting with everyone.

P.S. They were setting this up when we got to the bridge. There has been a block post there all along, but they moved the one BTR out into the center, and they were sandbagging it when we went by. I think Oksana was a bit surprised, because she hadn't seen any of this developing all along.

By Phyllis
I've been helping my friend to set up a Ukrainian charity to build and run homes for graduates from "our" orphanage. Recently all the paperwork was finalized, and the organization officially became reality. Because Will's sister was here and graciously agreed to watch our children, we were able to accept an invitation to go out to dinner and celebrate the completion of that step. It was really nice. I'm glad to be done with that part of the process and excited about what is coming next.

Also, in between paperwork for the organization, we have been working on details for getting Oksana, one of the girls from the orphanage, to the USA for medical treatment. That was also quite a process, but it came together, and she left on Thursday. I know many of you prayed us through the last minute visa trouble and changes in plans. God answered. Please continue to pray for Oksana and for all that she has ahead of her. She and my friend will be traveling in Virginia for a little while, if any of you live there and want to hear about the ministry here. One opportunity for that is in Williamsburg. Then they will settle down and start going to doctors and dentists in Texas.
Posted at 17:10 1 comment: 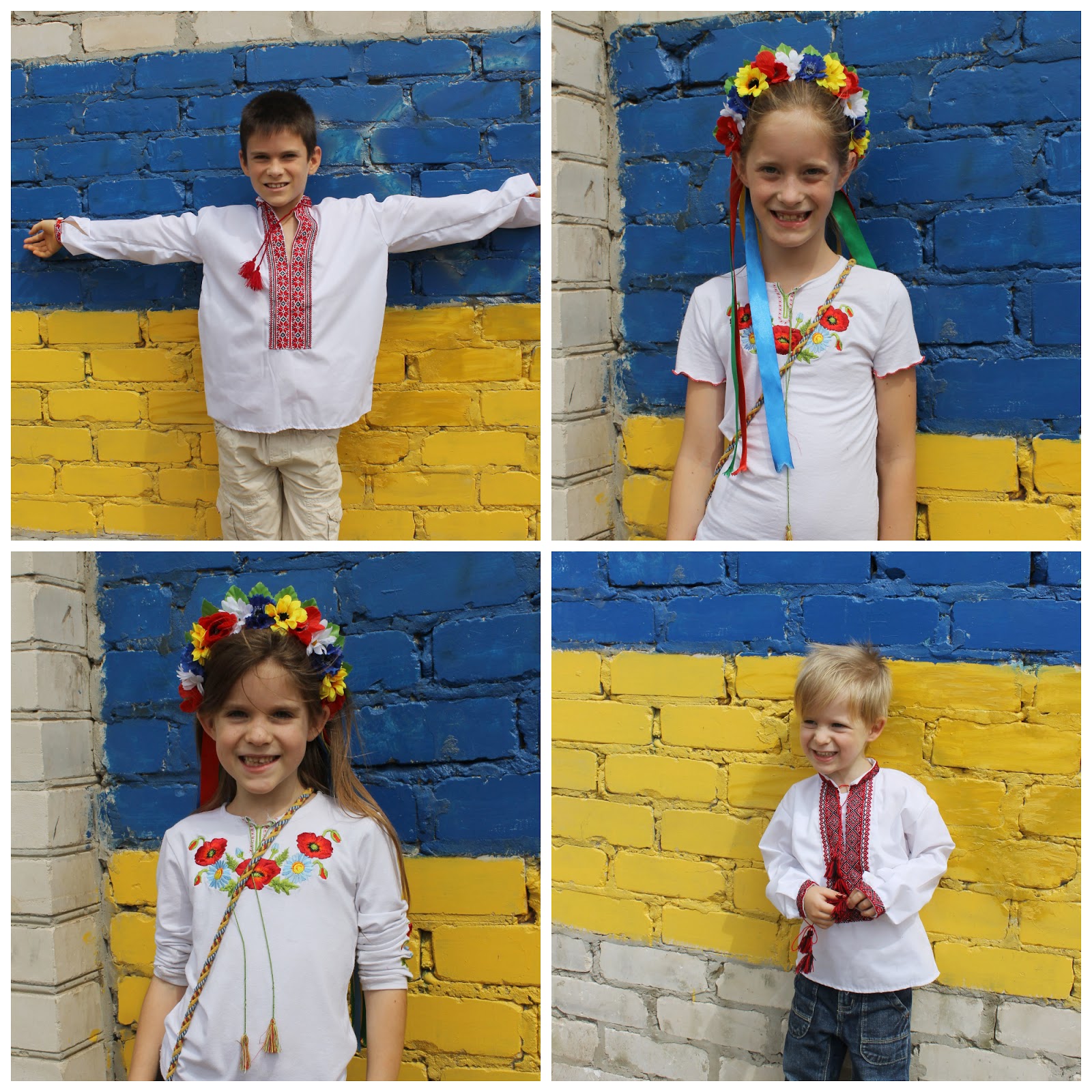 Today is independent Ukraine's 23 birthday! Just in the past year many people have become patriots, very proud of this country. I think this year's celebrations were probably bigger and certainly more solemn than ever before. We're all very aware that a war is going on.

After church we had fun with a little family photo shoot. 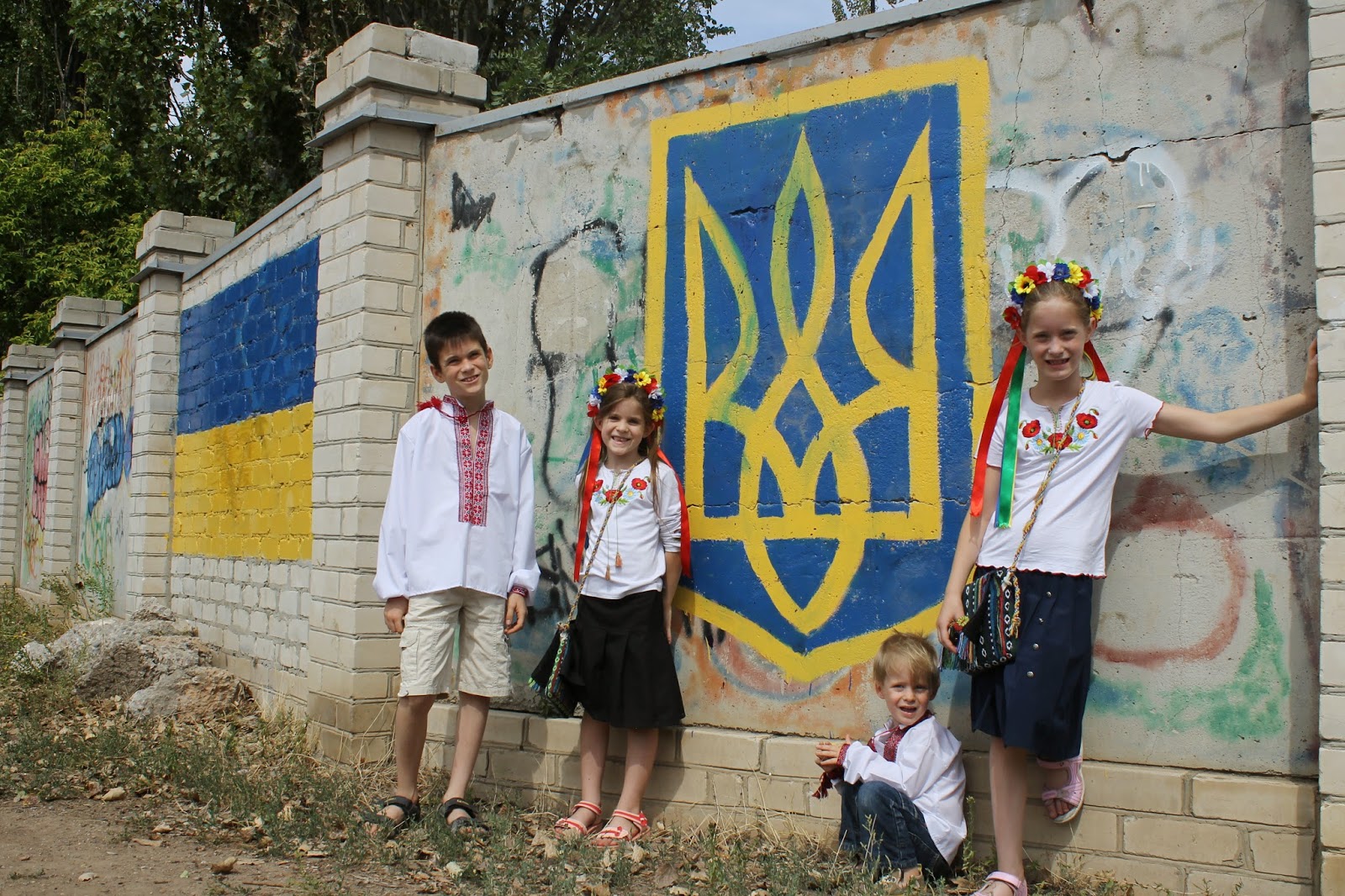 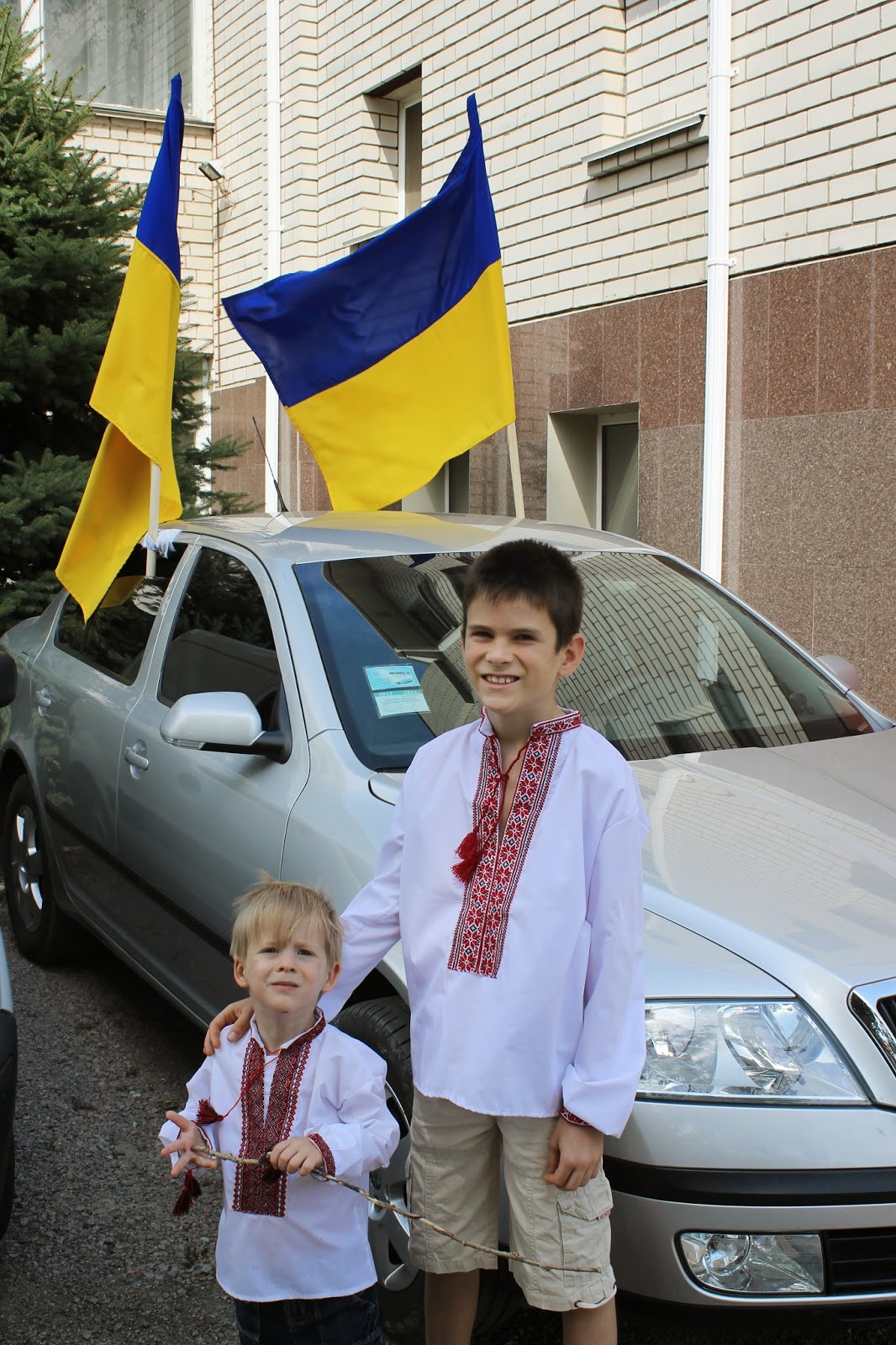 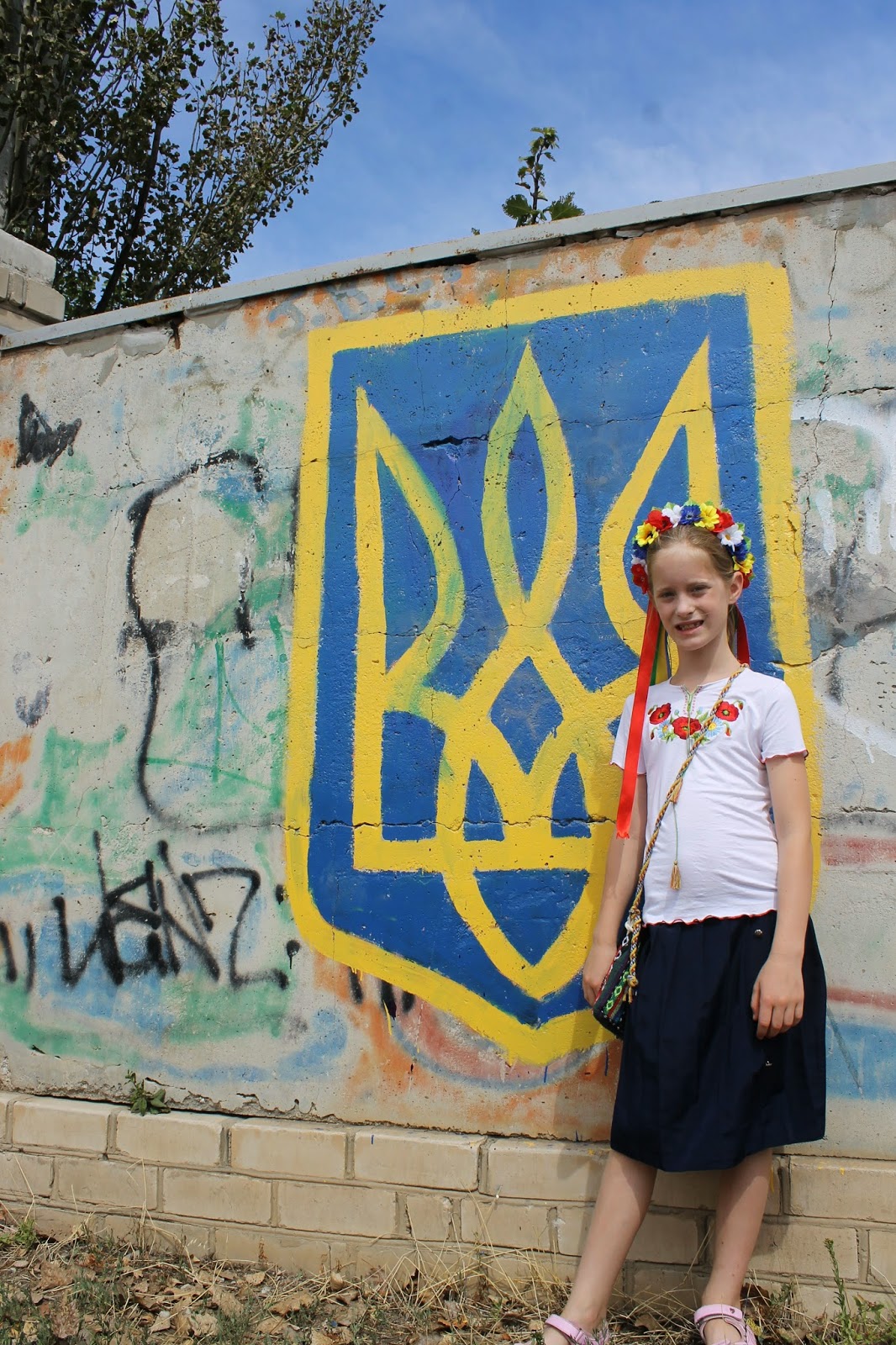 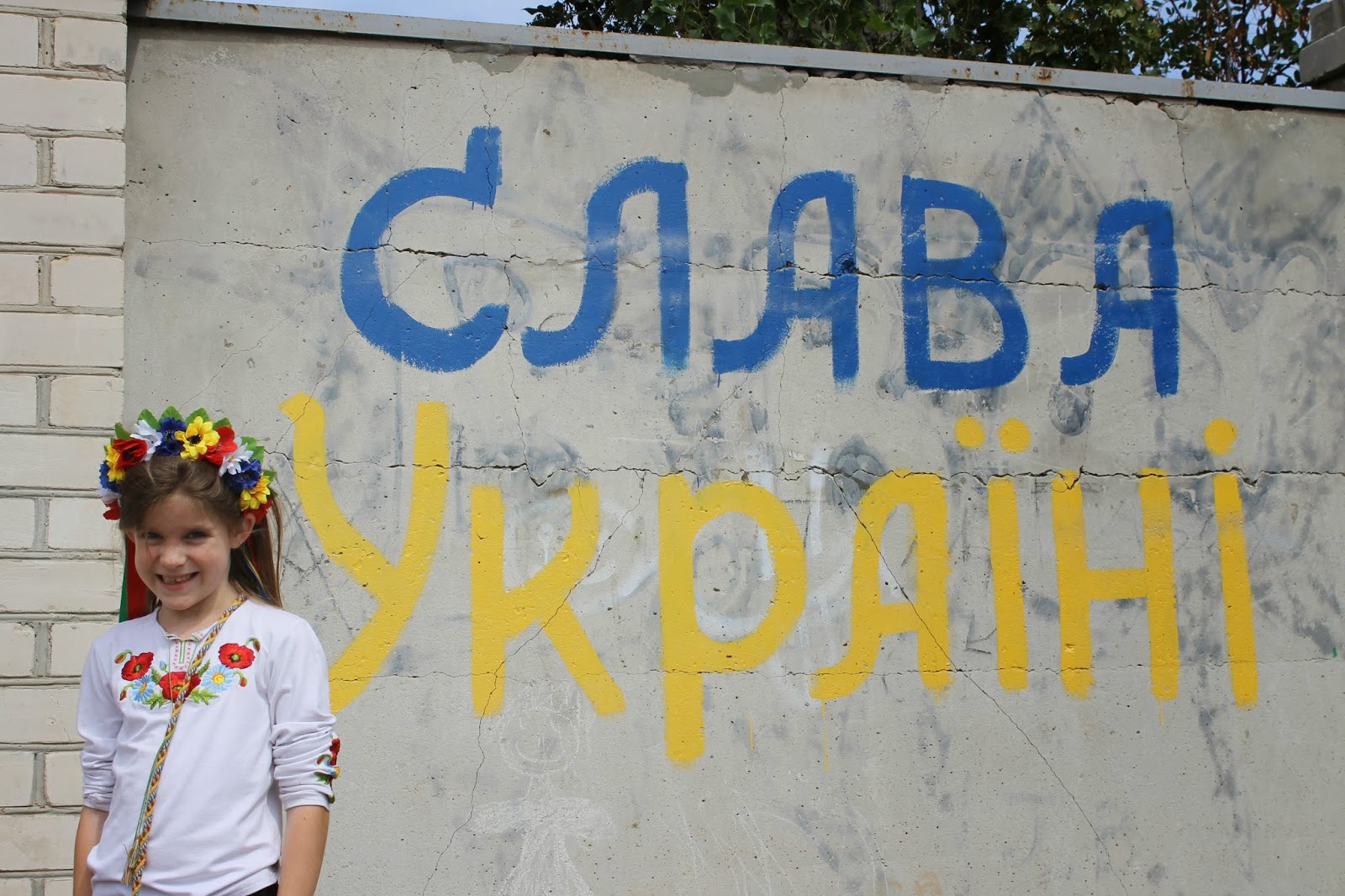 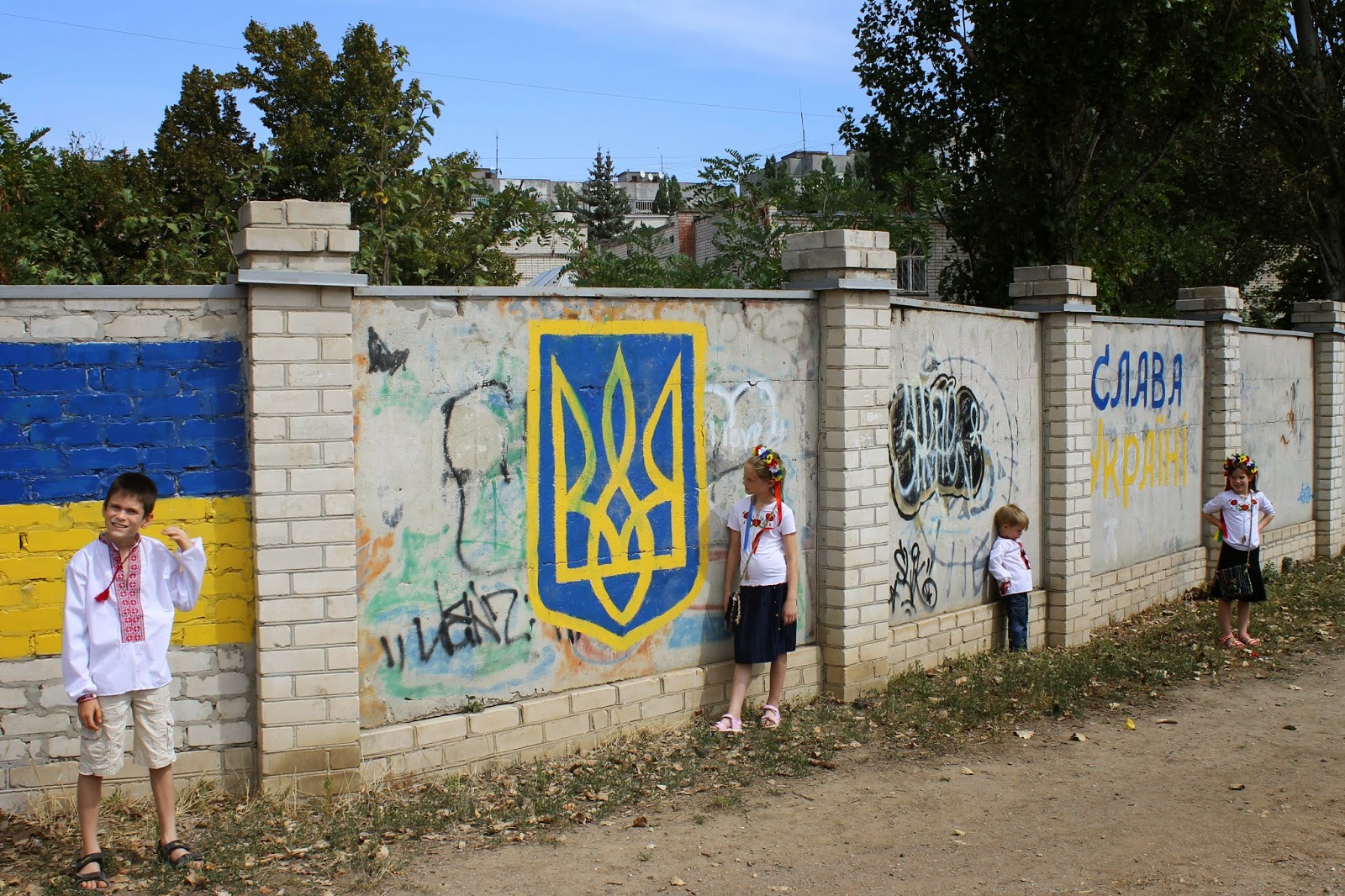 By Phyllis
Recently one of our boy ducks started picking on the others a little. Also, they all love to run around and flap and pretend to fly. So, Will decided that the one who was being mean must be bored, and this is his solution for it:


I'm afraid I must admit that they do this regularly. I find it funniest that afterwards Porosyonok has to run back to his friends and tell them all about it. Is he bragging about how well he can fly? Or telling them how scary it was? Or what?

We do have a lot of fun with our ducks. From some recent photo shoots:

Next I should make a collection of cute duck and kid pictures. We certainly have plenty of those!
Posted at 12:39 4 comments: