By Phyllis
Will's birthday was Saturday. We actually celebrated over a few days, since the present I had ordered came a few days early, then he and I went out to lunch on the actual day, and then we had cheesecake all together the next day. Bogdan made the cheesecake. Happy birthday to Will! 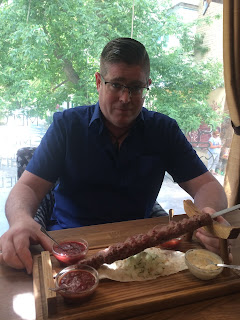 We went out to lunch just the two of us because our kids were at an all-day picnic at the river for the camp team. I was going to keep Bogdan with us, but Raia said that all the adults who worked at camp were taking their children, so she was going to take hers. They all had a wonderful time, of course. They were gone from first thing in the morning until evening. It was the first time any of our family have been on buses and trolley buses since March, and they took several to get there, all the way to the other side of the city. 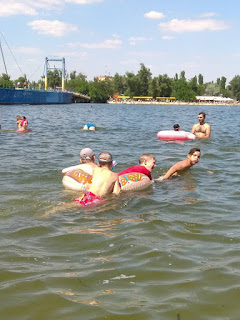 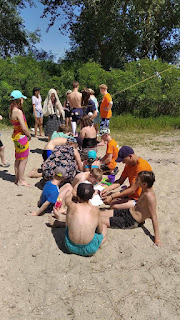 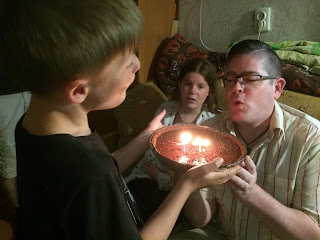 By Phyllis
A few days ago the Kherson library system posted an American history quiz in honour of the Fourth of July. The prize was a book in English. (About an Englishman, but that's close to American history, right?) He's actually someone I've been wanting to read about, so I took the quiz. It was hard! 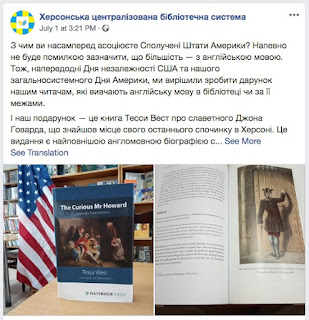 But, I got the answers right. I'll admit that I had to guess on a few, and then I checked them with Google, but I was honest and left my first guesses. One other person got all the answers right, and he won the book.

But then I wrote back and forth with the library about it. The book not available here, and it's expensive even in America ($50!). They offered me the electronic files of a working translation into Russian, though, and that looks good. Also, the American library I have access to has a copy, but it's in their hard-to-access format. (About library ebooks: Overdrive=good, Hoopla=mediocre, ProQuest=bad.)

I had been wanting to read about John Howard because of two connections: one, he died and was buried in Kherson. We have streets and squares named after him and a monument. And, two, Charlotte Mason mentions him a few times in her writing. So, I'll read in Russian and/or fight with ProQuest....
Posted at 12:58 1 comment:

By Phyllis
Thank you so much to everyone who has been praying for camp. As I said in our June prayer letter, it's been good, but sometimes hard. Today is the last day. Please pray for them to finish well and for an ongoing impact in the lives of all these kids.

And pray especially for Jaan. Last night after all the kids left, he stayed on at church. He was riding the youth pastor's moped and tipped it over, injuring his left hand pretty badly. As he said, the camp nurse was already gone, so they went into the medical room and "poured everything on it," then wrapped it up and had his friend walk him home. This morning the Sunday school director cleaned it again (she's a paramedic) and said that the nurse needed to take a look. I went to check on him, take him cold coffee--it's really hot again--and make sure that he did actually get to the nurse. She says that he'll be okay, but she wants to be sure to change the bandage again herself tonight before he comes home. So, please pray for good healing and strength for today in the heat after a bad night. Enough already with injuries for our family! (My leg is pretty much healed by now, which is good.)

Here are a few photos from the past few days: 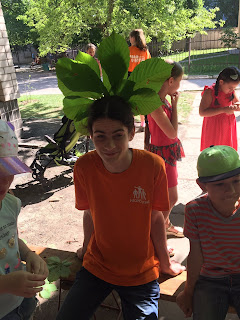 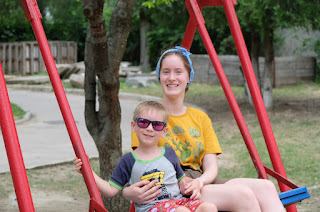