By Phyllis
(This is a scheduled post, so that you won't miss us too much while we're at our dacha.) 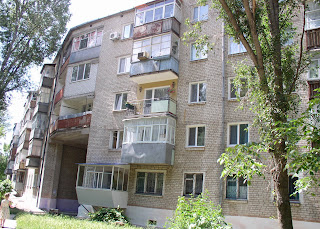 This is dedicated to my sister-in-law and her beautiful balcony. The photo above is the back side of our building. Our balcony is barely visible, the further half right over the arch. The one in the center of the photo makes me smile every time I walk by. It's pretty--too bad I you can't see all the flowers from this angle!--and it just sticks out like a sore thumb.

Also, this blog post made me laugh. (I don't know the author or anything; I just happened to see it on the city site. If you need "translation," here it is, run through Google translator.) First, foreigners are not the only ones who think their neighbors are doing weird things and want to document what they see. Second, I can see this "grave" outside our window. Hmm. I should take another photo, because the flowers around it are just lovely right now.

By Phyllis
(This post will add to the many, many visits we get from people searching for "First Dacha," which appears to be a night club in Latvia.

We spent our first week at our dacha for this year! There was so much to catch up on. The road had flooded in early spring, so there was mud to clear away, and the grass was waist high. Will did a whole lot of scything. It was wonderful to be out there again! We enjoyed good, small harvests of peas and cherries, and we're starting to get a few apricots. Soon we'll have ripe tomatoes. Beyond that, we've haven't really done much gardening this year; The Move took too much time and energy. 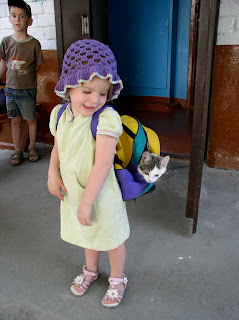 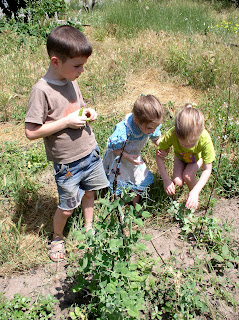 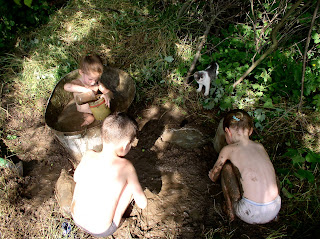 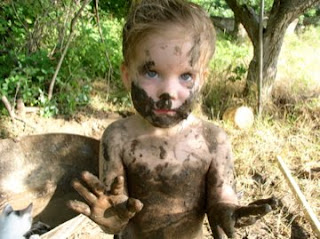 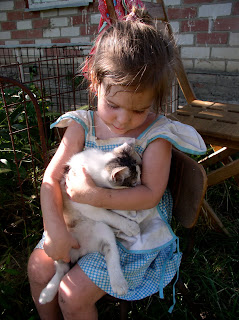 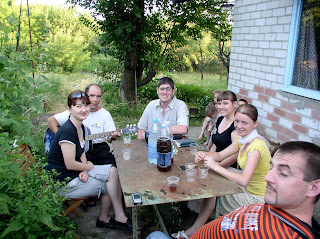 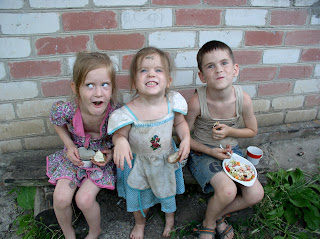 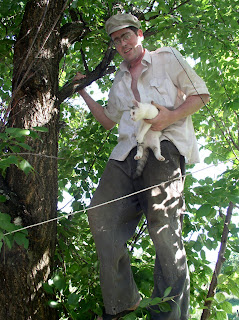 "You're not helping any," he said when I took this photo.
Our kitten loved his first dacha week. He had one adventure though. Wednesday night, he kept climbing up in the the huge apricot tree. Will went up after him a few times, but then, while we were putting everyone to bed (late) Budya-Zhenya went up there again. I said just to wait for him to come down by himself. We'd leave the door open, and he could join us in bed whenever he felt like it. Well...he stayed up there all night long! Will went out several times to call him, and once to chase off another cat. Finally, the next morning, Will had to go get him down. Poor Budya-Zhenya was so tired that he was almost unconscious the whole next day. 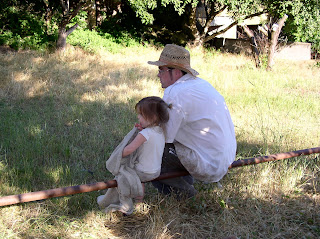 Hopefully, we'll be able to enjoy a summer schedule now: Tuesday-Saturday at the dacha. Come home to wash up. Church all day Sunday. Monday is laundry, home stuff and a swim. Then back to the dacha! It's much closer to the church than our apartment is, so that's nice for Will. And we all love the outdoor time!
Posted at 16:21 4 comments:

By Phyllis
I'm so, so thankful that it seems funny to write down such a short list! But here goes....

By Phyllis
We celebrated in Sunday school yesterday, and we have a fun day planned for today, too! 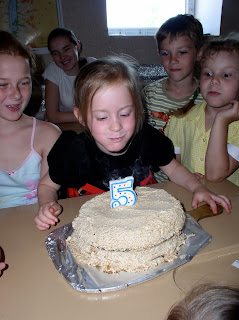 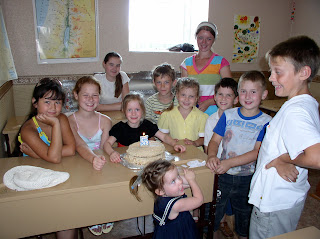 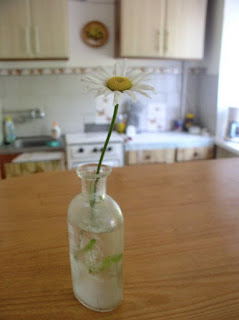 Remember how our kitchen looked when we first saw it? Here's what it looks like now: 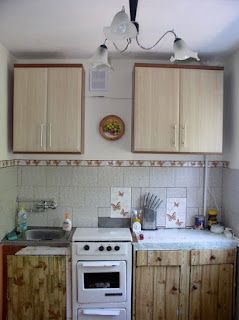 With a special designated gift (thank you!), we bought cupboards and butterfly tile. 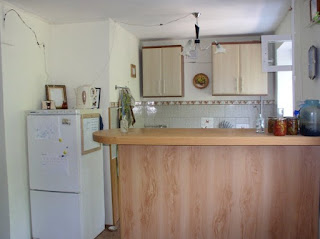 Will's not quite done yet, but it already looks good enough for photos. The kitchen is definitely the prettiest room in our new home! 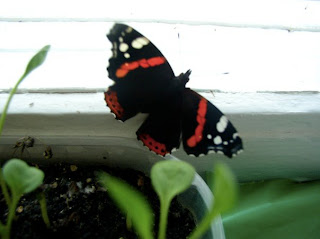 And this was in our kitchen today, too. 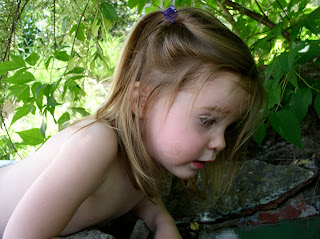 Asya has really gotten into learning Bible verses. For Sunday school, she's memorized Genesis 1:1, Matthew 19:14 and Psalm 54/55:23. I love the way they usually come out! She often combines them all, and she often says them, just because she feels like it, while she's playing or whatever. The most common Asya verse is "В начале Иисус сказал я держу тебя." ("In the beginning Jesus said I hold you.") I also laughed hard one week in Sunday school at the way she twisted her verse. I gave out paper hearts as rewards for saying their verses each week. Asya was supposed to say, "Jesus said, Let the little children come unto me." Instead she recited, "Jesus said. . . [long pause] Give the little children hearts!"

As I mentioned before, our little Sunday school is done for the summer, but I'm already filling in for the other teacher off and on. The first time went fine, even though I was worried about how I'd do with the big, combined group and wild older boys. I get to have them again in two weeks, so please pray that it will go well next time, too. Thanks!
Posted at 20:53 1 comment:

By Phyllis
I find this hilarious! He loves iced tea: 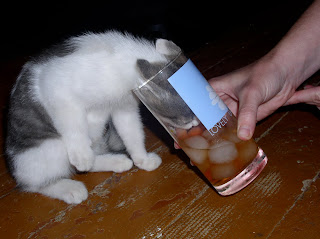 By Phyllis
I said that I would tell you about our latest water adventure:

Sunday when we came home from church, I didn’t even notice that our electricity was off, but I certainly noticed the shock I got when I went to wash my hands! It took a while to figure out the problem, because the day that it started, someone had been caught trying to trick the electric meter on his apartment by running a wire from it to a pipe or something. So, when Will first started trying to track down our water problem, everyone told him that it was probably related to that. After two days of trying to figure out what was going on, Will and a plumber found it. We have two breaker switches for our electricity. When one flips, the other sends the electricity "backwards" through our water heater. (The plumber who helped Will figure out what was going on explained it better, but I didn’t get all the technical details.) One breaker switch was old--and Will had also rigged a light fixture not quite right--so that was happening often. Will replaced the old breaker and fixed his light, and everything seems to be working now.

Sometimes we’re still approaching the sink rather gingerly. It would probably be pretty funny to see me wash my hands now: I turn on a light and watch it, ready to jump back if it goes off, then I quickly and carefully do whatever I have to do with the water. I also think about whether or not an object conducts electricity before holding it in the water. Ceramic mug? That’s fine. Spoon? Better to set it down and let the water flow over it.

Asya asks if it will hurt before she touches water, even through she didn’t ever experience the shocks

I liked something that Jaan thought up Sunday afternoon. They wanted tea, and I told them no, because there wasn’t any electricity for the teapot. (Yes, I could have heated water on the stove, but I was being lazy.) Jaan suggested that I turn on the water, then take the end of the plug for the teapot and hold it so that it went into the stream under the faucet.

So, there you have it, our most bizarre experience with utilities so far. I told Will that if I ever try to light the stove, and water comes out instead of gas. . . that's when I quit.
Posted at 15:58 4 comments:

By Phyllis
We have internet at home! There was no way that we could get a phone (and DSL) in here, but we found a cable internet company instead. I've heard bad reviews of it, but it seems great so far and even if it turns out not to be so great, something is much better than nothing!

I still can't get our email to check, but hopefully that will be working soon, too....

And tomorrow I'll tell you about our latest water adventure. It was pretty crazy!
Posted at 22:15 2 comments: