By Phyllis
The yearly orphanage picnic was on Friday, and it was wonderful! I don't have too many photos that I can share, because most of the pictures are full of happy faces that aren't part of our family and can't be shared. You'll just have to imagine.

Again this year we were in the big city park. There were 18 kids, 15 of whom of are in wheelchairs. Most of these kids very rarely get away from the orphanage. We were also watching three more visiting American kids, so our family had seven, instead of our usual four. All the kids seemed to really enjoy themselves as we played, enjoyed being outside, learned together, played some more, and walked back and forth to the fountains. (Although those fountains were overwhelming and scary for a few who hadn't seen anything like them before!) Even the weather cooperated; last year was unbearably hot, other years we've struggled with rain and wind. This time it was just right. Oh, and again we wrapped up with dessert at the nice restaurant there in the park.

This year Alys' helper Sasha organised the picnic helpers, and I was surprised and thrilled to see that most of them were from our church. They are people I kind of knew at a distance, but had never really gotten acquainted with, or they are friends of our children, but--again--I didn't know them well. Also, Oksana led the craft time all by herself, and she did such a good job. It was really good to be see all these people in action, to serve with them, and to get to know them a little better, too.

By the way, we have a few full days ahead:
Thursday--watching the five visiting kids (what that looks like

Don't expect to hear from us for a little while.

By Phyllis
Last Sunday Jaan turned 14. It was one of our usual full Sundays, so in a way we didn't do much to celebrate, or you could say that we did lots. He had some special meals over the whole weekend, and he got the present he really wanted: a huge Nerf gun. Then Sunday evening was our last outdoor "North American fellowship" for the year, so we sang happy birthday to Jaan there, too. The pictures below are from that time: 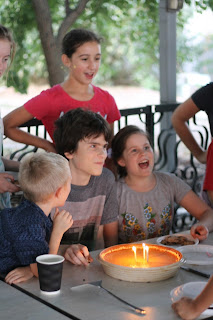 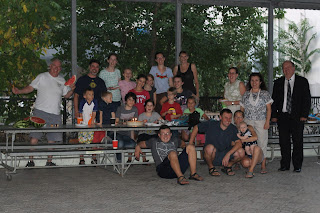 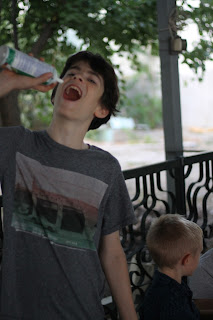 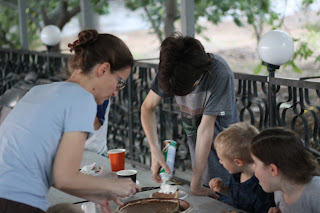 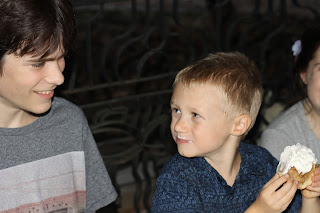 Happy birthday to Jaan! Next Sunday is Asya's turn to have a birthday.
Posted at 17:59 1 comment: