By Phyllis
Today was the Last Bell for art school. Bogdan had to be woken up from his nap to go, and he was not happy about being called up on the stage first thing, as soon as we got there. He got a prize for being one of the most faithful attenders throughout the year. Both our girls were in the group of second most faithful. They all got certificates for finishing the year, too, of course. 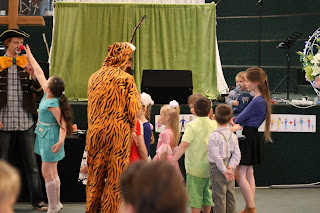 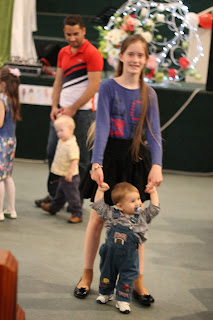 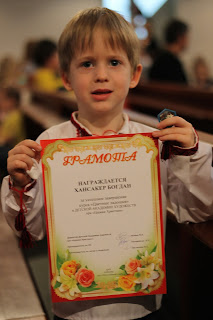 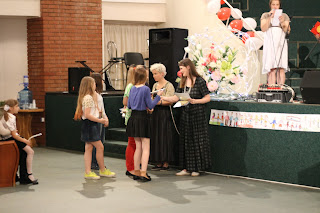 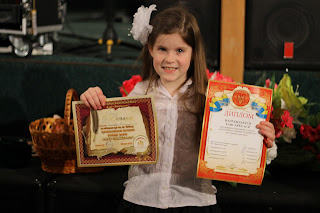 We love art school! This year they're going to try offering some summer classes, so Raia might survive until fall. I think she and I are going to go to those together.

There should be photos from the art school posted later, so I'll come back to add a link to those.

By Phyllis
When the conference dates were set, I actually thought, "Oh, no! I might miss the poppies." Last year (click through those to see all of them) there was an incredible poppy field near us. I was really curious to see if they would grow back this year. They did! The red is not quite so thick, nor so extensive, but it's still beautiful. Large parts of the field burned in the fall or winter, and it seems to me like the places that burned didn't bloom; the poppy seeds must not be able to handle heat.

So, I arrived home on Tuesday morning, and that afternoon the boys and I went out to check on the field. The girls were at art and music then. 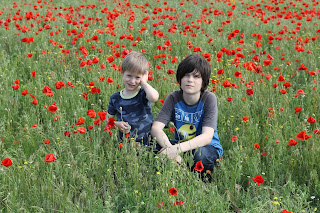 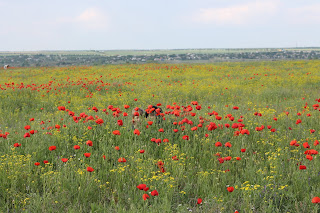 Wednesday we had rain and hail, so no walk in the flowers could take place. But on Thursday, as soon as Raia got back from lessons, the girls and I (and Bogdan) went for another walk. 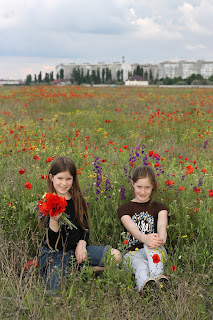 Finally, on Friday, all four children went with me for another time. Raia took most of the photos below here. She's really enjoying photography these days, whenever she can get her hands on the camera. 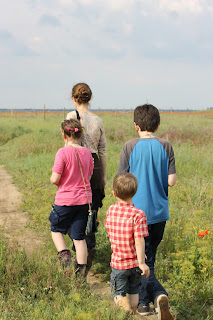 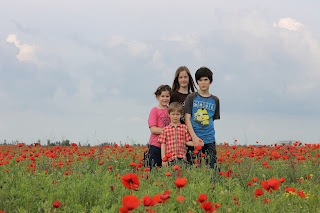 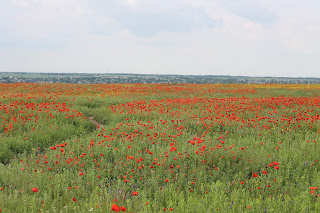 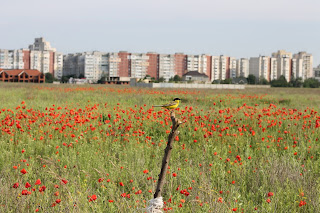 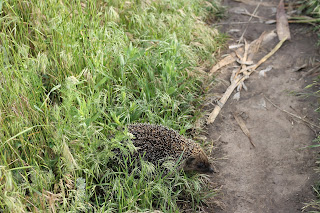 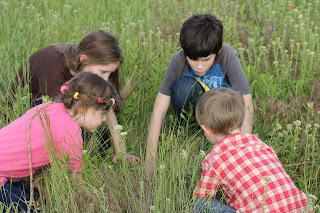 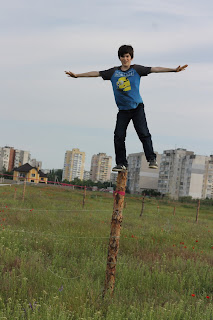 The field has been just what I needed. I had such a wonderful two weeks away, but I am tired. I came home from Kyiv and America and just jumped right back into life. There wasn't any other choice. But I have dragged through this week. So tired! Mentally, emotionally, and physically. I should be refreshed, and I think somewhere down underneath it all, I am. But I need to recover and process, and I haven't had any time for that. Plus, I spent two weeks with adults, and I'm finding that it's a real adjustment to be back with little people all the time again after so long away, no matter how much I love them and missed them. Walks in the flowers help.

Today I was really looking forward to getting back out to Tsyurupinsk. Even though I am exhausted, I was going to push through it. I often do, and it usually turns out wonderfully; I forget about my tiredness once I get there. However, today, I prayed about staying home. I wanted a specific answer, and I didn't get it. Still, I stopped. I called the kids at the orphanage and told them that I'm home, but I'm not coming to visit them today. That was good. I'll go next week. They have fun stuff going on today anyway. Will took our kids to a missionary day at the local Christian institute, and I'm finally getting my time to recover alone. Part of that has been going through all these beautiful photos. I hope you enjoy them, too. 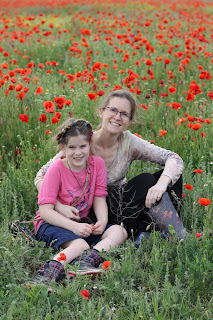 Deep in the Heart of AO 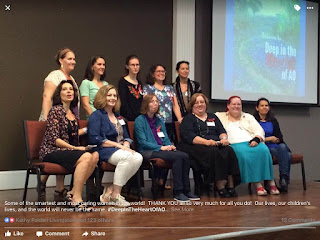 Before Texas I was in Kyiv for a week, and I'd still like to write about that. Then the rest of the family came up for my graduation and a weekend together. (Will posted some great photos of that!) Afterwards, I flew to "Deep in the Heart of AO," while the other five of us went home on the train.

I arrived a day early, and a lovely friend met me at the airport. I spent the night with her and sat in on the sociolinguistics class she teaches. She has known me since I was born, and we hadn't seen each other for years, so we thoroughly enjoyed catching up. Oh, and my luggage didn't catch up with me. 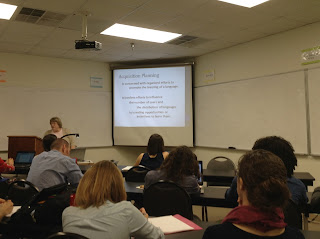 Next my friends Amy and Naomi with their beautiful daughters picked me up and we headed to the retreat center where the conference would be. Amy's borrowed,"Texas sized" van got a flat tire that was discovered almost as soon as we arrived.

While she and others were busy with that, I got to be with Elia, the sweetheart in my earlier photo. I figured she wouldn't remember me from last year, and maybe she didn't, but she was very happy to be my friend again this year.

And really, all the babies were one of the highlights of the time there for me. There were so many! Even on the first day, while it was still just AO Advisory and Auxiliary, these two and one more were with us:

The reunion and time with these friends of mine was as sweet as I would have expected. We had dinner and got busy: praying, assembling booklets, meeting with the staff, sorting conference goodies, and more. We had a loaves and fishes miracle with the booklets. (Or we can't count.) Wednesday night there weren't enough. Amy had printed them in Peru and brought them with her from there, and that was before the last few people registered. But Thursday morning there were enough for everyone! By the way, they were just beautiful, too. Amy is amazing, as are all these wonderful women. 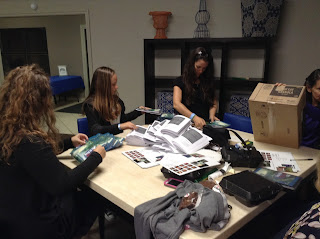 It was more of the same the next morning: preparations and fellowship. My suitcase finally arrived, and I changed out of borrowed sweatpants just before the conference attendees started arriving. As they checked in, we had three hours of an "AO mini faire," where we had tables set up in a big room with different items or topics at each one. Karen and Amy and the other authors were signing and selling their books. Handicrafts and notebooks were on display. I had a table to--officially--help people with the forum and--unofficially--talk about orphans in Ukraine. (As Donna-Jean said, it's all "for the children's sake.") I talked for the full three hours, almost non-stop and was hoarse by dinner time. 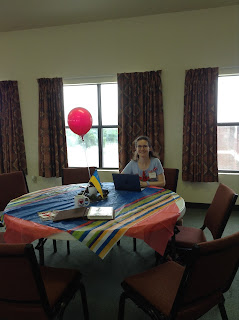 Then dinner... as an aside, the food was great the whole time. After dinner Donna-Jean spoke to the whole group. That was excellent, but I'm going to have to listen to the recording or something before I can recap, because I was overwhelmed with details then. I did laugh a lot (she's hilarious!), and I probably teared up at least once with the serious parts. Afterwards we were supposed to have a campfire and hayride, but that was postponed because of rain. So, we went back in the faire and talked some more. The last thing that day was a quick Advisory/Auxiliary meeting and then bedtime. (I got to room with Anne White, which was a treat, even though we were mostly running around the whole time.) 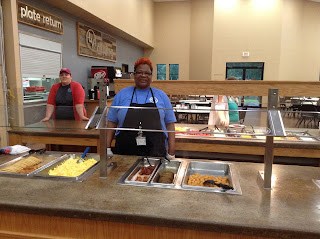 Friday was the biggest day. I don't think I'm exaggerating to say that it was one of the most intense of my life. I spoke twice, and in between that, I was organizing recording as many sessions as possible and helping however I could. I know others did much more; Karen spoke three times right in a row, including an incredible plenary session.

Wendi's plenary on the riches of a CM education--art, music, and more--was very inspiring. She did some picture study with us and talked about how these things are what we can start with, not something to add on after the real school subjects are done. I was sitting with Karen, and she kept saying that Wendi was stealing her talk. We didn't discuss anything more than our titles with each other in advance, but it was amazing to see how everything fit together.

Some of the breakout sessions were overviews of AO years. During the first one, I listened to Donna-Jean talk about the early years and particularly Year 1. Then, in the next session, Kathy covered Year 2, I spoke on Year 3, and we took questions about them. Then lunch, then Karen's plenary on synthetic thinking and narration. (It's in her book; read it!) After that I sat in on Karen's breakout about high school and Year 10. I was just there to record, but I still found it inspiring. I look forward to getting to those books with our kids. Then I was off to my own session on foreign languages.

I think it went okay, and the feedback was encouraging, but I felt very scattered. I had so much information, and condensing it all coherently was difficult. Not to mention that I was speaking to a huge auditorium. Last time I did this, it was in a small room, with a great little group, and I did an interactive lesson based on a PR article. This time it wasn't possible to do anything like that. But I gave my talk, and I hope the discussion can continue online now.

At that point, I gave a big sigh of relief and went to dinner. After dinner Lynn spoke, and her talk was the heart of the conference, about the heart of AO. Just being with her was such a treat. She was the only one of the Advisory who I hadn't met before, and the circumstances and emotions involved made finally seeing her even more of a big deal than it sounds like.

I should have written this in parts. I'm running out of steam.

Saturday morning's "Progeny Panel," where some of the Advisory daughters spoke was incredible and encouraging. Anne's plenary was fascinating. We answered some questions in another panel. And then it was over.

Maybe as I process the audio and my own thoughts, I'll be able to narrate some more here. Or I'll remember something that I had wanted to say and come back to add it. Until then, I'll just say that Deep in the Heart of AO was amazing, and I'll be going on the encouragement and memories from it for a long time.
Posted at 12:00 3 comments:

By Phyllis
The conference is over. My travel adventures continue, so I'll write a little as I sit in DFW airport and wait (and wait and wait).

I just spent the most wonderful few days with the people in the photo above. I won't write details, at least not now, but I will say that it was wonderful and amazing refreshing and exhausting. 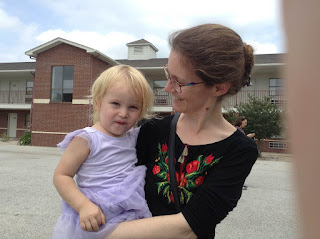