By Phyllis
We had a great day at our dacha on Friday! Our neighbors had said that we have tons of apricots almost ready. Well, yes, they're almost ready. Not quite yet. The cherry tree was covered in ripe fruit, though, so we picked cherries instead of apricots.
Later in the day it rained hard, so Will opened "the garage" as a play place. There's a small building at the top of the hill that the previous owners used as a motorcycle garage and turkey house. Our children didn't know that it had a secret entrance for turkeys. (

) They discovered that, and carefully cleared out all the bottles that were stacked in it. Then they spent the rest of their time working on it and crawling back and forth through it. 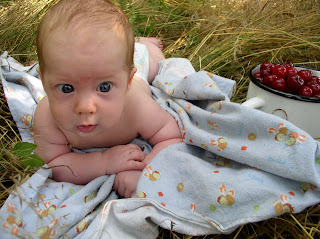 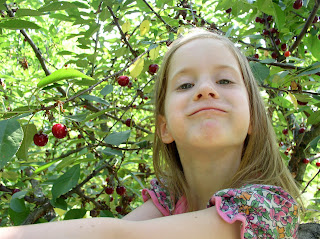 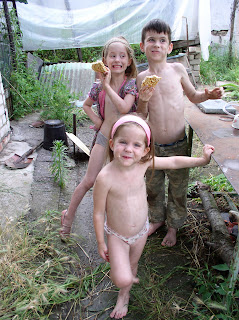 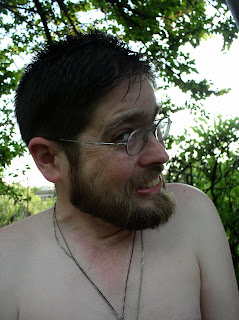 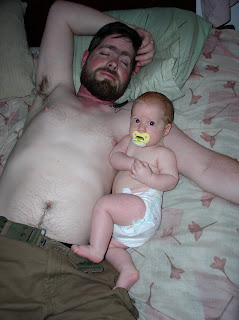 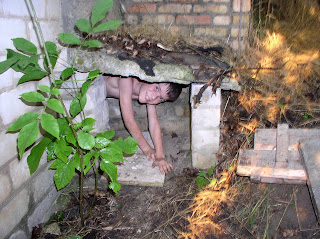 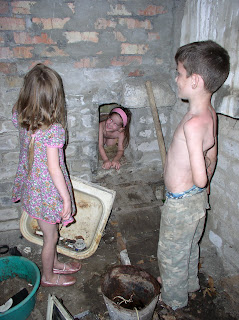 Crawling in
We sometimes say that the man who built all this was a real miner. There's a basement under the house that could be used as a bomb shelter, along with a tiny tunnel that he made to get his chickens from their home to the greenhouse, this secret turkey entrance, and a place where he was working on digging deep down into the hill for a root cellar. 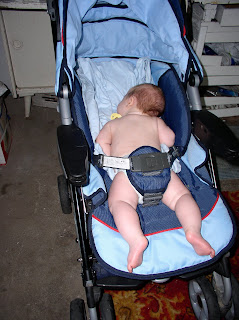 Tired boy
It would probably do permanent damage to a Russian baby's spine to sleep like this, but Bogdan seems to like it.
After the rainstorm, we almost had to wade home. I should have taken pictures of everyone's feet when we got here!
Posted at 13:51 5 comments: 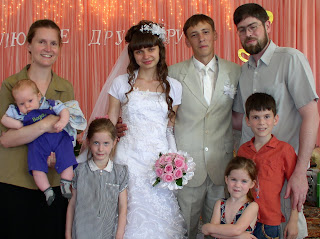 With Vera and Andrei
There was another wedding this weekend. Here, this time, so we didn't have to travel. We don't know the couple too well, since they are from a village nearby, but they used the church for their wedding, so we were involved. 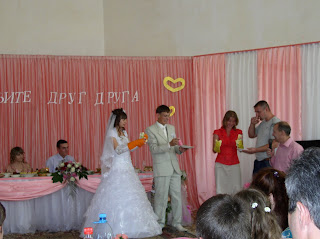 A game and object lesson
(Squirting mayonaise out onto a plate, and then trying to get it back into the bag. It's much easier to say something than to take it back!)
I've also posted the rest of our photos from Lena's wedding. I still haven't gotten anyone else's photos to fill in the gaps, but we have quite a few ourselves.
And thanks.... It's been way too long since I've listed special gifts from God to me. I probably could (and should!) come up with 100 right now, but I don't have time to sit and write them. I'll leave this open though and come back to add to it all day:
Posted at 15:08 4 comments:

By Phyllis
...to show you something: 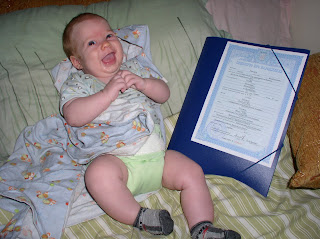 He has a birth certificate!
Will got it yesterday. I realized that Bogdan is just about the same age Raia was when we finally got hers, too. Although, Will said this whole thing was nothing compared to that. (It looks like she was trying to eat her hands in the picture, too. Bogdan's main goal today is to stuff both fists into his mouth.) There is just one more step to go through: we have to see a city official on Wednesday who will decide if we need to pay a fine or not. Thank you so much for all your prayers!
Recently I was listening to John Piper, and he said something like, "If someone wants to know that you're alive, you don't go digging for your birth certificate. You just breathe." I laughed. Too bad it's not really that simple. Now Bogdan can officially prove that he's alive.
Bogdan also went in for his 3-month check up yesterday. I think it's pretty ridiculous that we have to take a healthy baby to the doctor every month, but it is kind of fun to know how much he weighs. I never knew with our other children. Only, this time, I don't remember what they said. Either 5.1 or 6.1 kgs. He's 63 cm tall. I looked up he American charts, trying to figure out which weight was more likely, but I still don't know. That's either 31st or 4th percentile for weight and 62nd percentile for height. The doctor fussed because Bogdan wouldn't stop smiling and babbling at her so that she could listen to his heart: he's too happy! 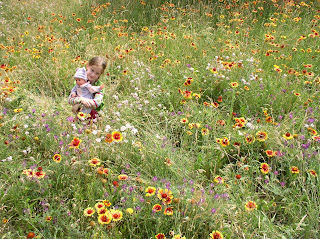 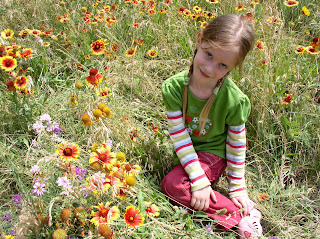 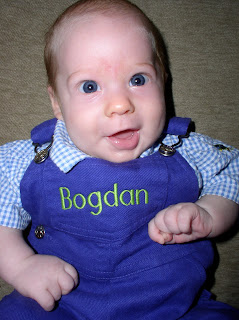 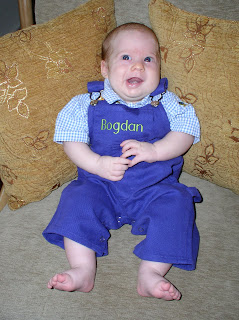 By Phyllis
It's been a week since the wedding. Let's see if I can get at least some of the pictures up today....

Last Thursday we left on a marshrutka (van-bus) for Zaporozhya, with our family and three other people headed to Lena's wedding. In Zaporozhya every else got on their train, and then we boarded another. For some reason, tickets are scarce this summer, so we couldn't all go on the same train or by the same route, even though Will worked hard to try and buy all the tickets together. 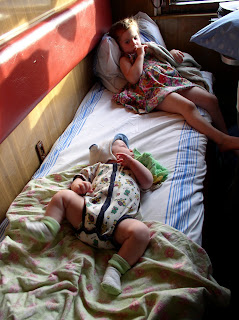 Bogdan's first time on a train 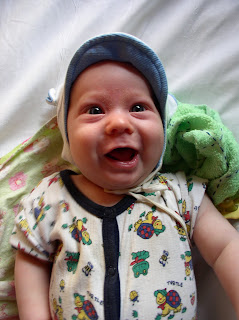 He was so happy! 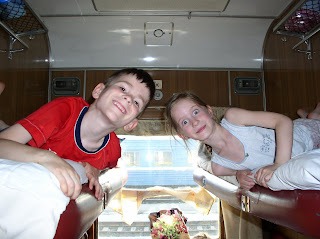 And they were CRAZY 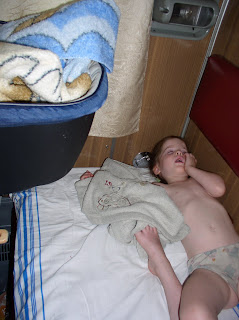 Just before we had to wake everyone
for an early-morning arrival in Kiev. All mornings were early, and all nights were late on this trip. By the way, that's Raia's foot by Asya, and the edge of Bogdan's bed on the table. Six people in one coupe gets crowded, even when they're little. Oh, and the car we were in was actually air conditioned and cool, which was a direct answer to prayer! AC on trains is almost unbelievable; I guess it's a special Ukrainian summer phenomenon? However, so far we've only seen that AC means that it's even stuffier, because the windows won't open at all. This time it worked!
We had several hours to wait in Kiev, so we ate at "The Restaurant" (i.e. McDonald's), ran laps around the children's waiting room in the train station, and then finally got on our next train. We had to trade around to get places together, since our tickets were all over, and it was pretty funny when the conductor brought on older man to us and told us that he would probably trade with us... if we could make him understand. She was a little frustrated, and said that he didn't speak Russian at all. Will said that it was no problem, and then spent hours speaking English with him.

That evening we got off the moving oven, er--that is, off the train--and made our way to the church, to join in on... 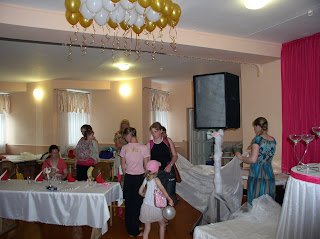 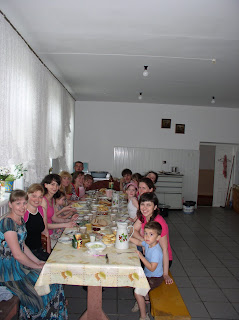 Late meal
They were almost done decorating by the time we got there, but then we all ate together. Afterwards, we went to our host's home and collapsed into beds.
More later....
Posted at 07:29 2 comments:

"The Queen of all Green"

By Phyllis
The little boys she was playing with told me, "We greened her!" 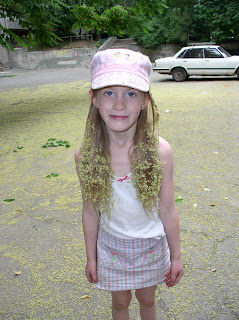 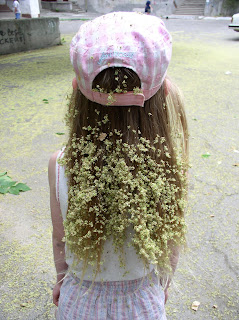 (Wedding pictures are still coming. We've had a hard week recovering from the trip, and I still want to get some photos from Alina and Yana.)
Posted at 10:32 1 comment:

By Phyllis
We're home. Lena's wedding was wonderful! The trip was very long and tiring. Really, it was almost four days of travel, for one day of celebrating. Everything went pretty smoothly, though. Bogdan especially did well on his first big trip. He only broke down once and screamed for a little while. That was Saturday evening, after going non-stop for ten hours: the government wedding, the (long) church wedding, the (even longer) wedding feast, and an excursion to the local castle for wedding photos and a tour. 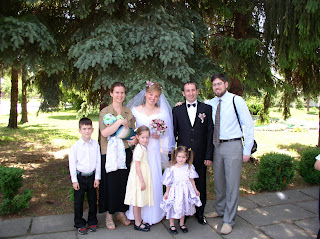 By Phyllis
Tomorrow we're leaving to travel all the way to Dubno for Lena's wedding. (The picture below is from her farewell tea at church.) Please pray for safe and easy travels. Maybe pray specifically that somehow--miraculously!--it won't be too hot on the trains and that we'll be able to sleep? ZAGS is the place that does birth certificates, among other things. The last news I posted about Bogdan's birth certificate was that they were sending everything from Vasilevka to Zaporozhya. In Zaporozhya they decided that it could be handled locally, without court. (Hurrah!) So, Will has been going back and forth to the local ZAGS since then. They're very nice and helpful here, although, first they wanted originals of everything, not copies. Then, today, they noticed that the form signed by all the doctors has mistakes. (We're not the only ones around here who don't know Ukrainian!) So, Will will have to get another one of those forms from Vasilevka and have it redone at the hospital here. We're making progress, though....
Posted at 17:48 3 comments: