Choir at the orphanage

By Phyllis
Thank you for praying! Our whole family went on Wednesday, and it was wonderful.

Some of the church youth who are in the theater group wore costumes and played games with the kids: 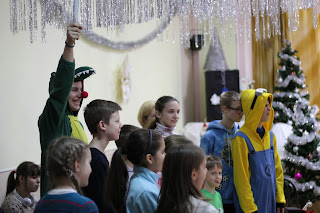 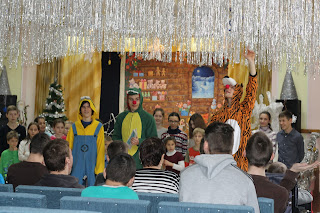 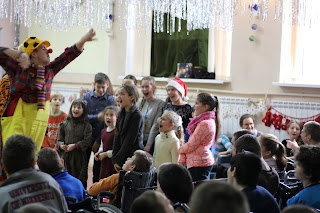 Then the choir sang and recited: 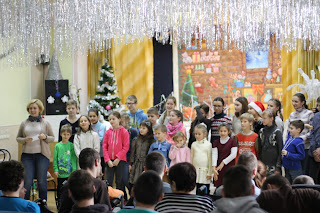 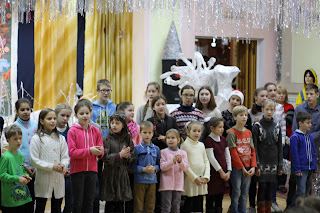 Then there were more games and skits: 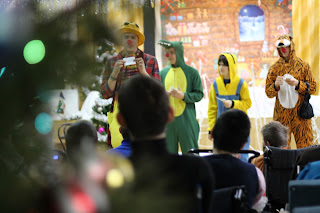 Toward the end, the choir kids paired up with the kids in the audience and made crafts. Then the choir handed out the presents they had prepared. All of that was really sweet, but I can't share the photos because we're not supposed to show faces of the kids who live at the orphanage. So, like I've said before, you can imagine it.

When we got back on Wednesday, most of the teens rushed right into preparation for a three-day Christmas camp at church. Raia was so excited that they had asked her to be a helper in that this year! She came home with us after the orphanage, but just to get her things and go back to church, where she's been since then. She has gotten to sleep there with her best friends and work at the camp. Asya and Bogdan have been really enjoying days at the camp, too. Today is the last day of that.

Then, next week we'll start back to school. Our family and music school had a Christmas-to-Christmas break, even though some of the schools around here started their break later and have another week off now. Art school will doing a camp all next week, and they asked Raia to help with that, too. At first I thought she wouldn't, since her siblings aren't going to be there, and we'll be doing school and music. But then I said that she can help in the afternoons, so the excitement continues, at least for her.

On Friday the church theater group that Jaan is in performed their Christmas play. It was a wonderful version of Dicken's Christmas Carol. There are all these photos online already, and you might have seen the one that I posted of Jaan and his friend "Scrooge" right after the performance. Now I'm putting all the rest of our photos and videos here. I took video in almost every scene where Jaan spoke. In the first one he said that I missed the funny part (yes, I did), but at least there's a photo of that (him with the wreath around his neck). 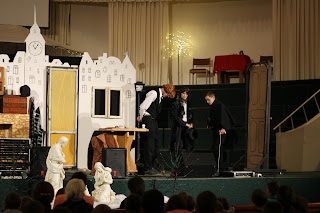 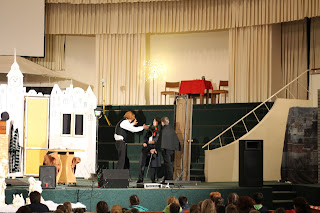 I really liked the snow, so here are a photo and a video just to show that: 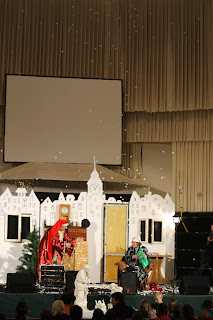 Then another video with Jaan in it: 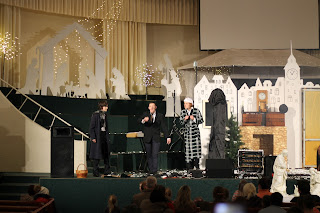 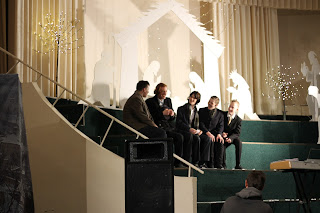 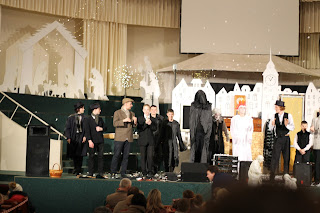 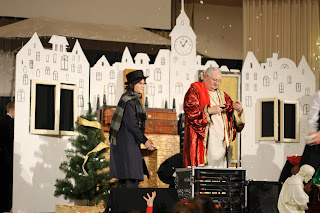 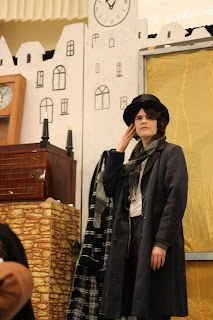 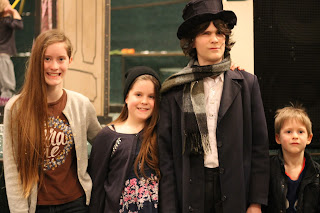 Now that the play is over, our next big event is Wednesday. We're going to the orphanage with the church children's choir. Please pray specifically that our own children will stop coughing, so they can go, too! The kids there really love our kids and have been looking forward to this for weeks. Of course, it will be fine even if ours can't go, but it would be so much more special with them.
Posted at 17:17 2 comments: