By Phyllis
We've been enjoying fall crafts! Ever since the leaves had just barely started changing, we've been collecting and pressing them. I put a bunch of those to use in decorating the living room: 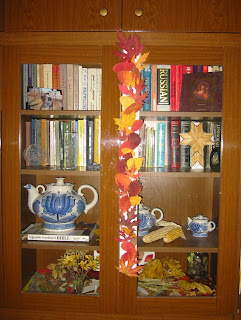 And yesterday we tried the classic iron-leaves-between-waxed-paper craft.  That was a big hit! 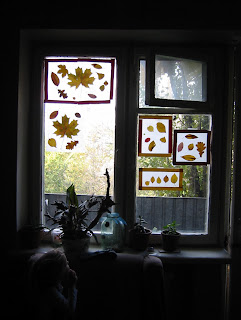 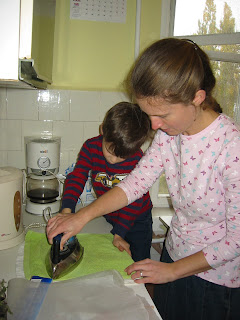 and Asya sat in her onion drawer,* 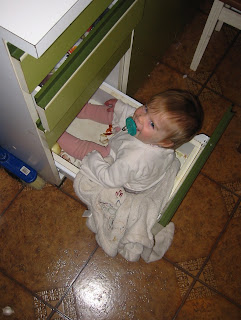 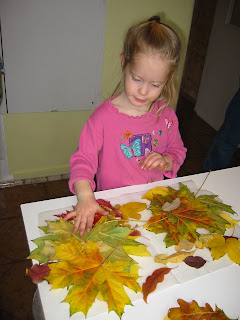 By the time her masterpiece was ready, she had our whole collection piled on her waxed paper!  She wasn't very happy when I told her that it was too many, but then she decided that she liked the idea of dividing them out to make several pictures.

We're also trying something new: preserving leaves with glycerin.  We just took the first few out, and I'm quite pleased with them.  I wonder if the greasy look with go away after a while, though?  If I had known about this earlier, and if I had a better supply of glycerin, I think we'd have garlands of the beautiful yellow maple leaves inside.  As it is, I think we'll be able to make some small decorations of some kind.

The leaves we had yesterday all came from a wonderful morning walk.  Will went with us, so we went much farther than usual.  And we saw wildlife!  Down by the "sea," I had climbed up on a bank and was waving down at Will and Asya, when Will starting pointing right over my head: a squirrel!  They're much rarer and much cuter than American squirrels.  We followed this one for a while, as it jumped from tree to tree, and all the children got a good look at it.  After that, Asya kept pointing to tree tops and saying, "Meow?"  A little later we startled a hare.  The children missed that, but Will and I saw the black markings on its ears and tail as it flashed away.  It was really big!
*Asya's onion drawer is her spot in the kitchen.  She loves to sit in this one drawer and play with the onions and garlic!  Having onions and garlic as her favorite toys does make dinner preparation somewhat traumatic for her, but she's usually pretty generous. . . if I beg.
Posted at 14:04

Such a delightful post! Your leaf crafts are beautiful; all the colors and shapes. How fun! And Asya's onion drawer is too cute. She's getting so big!

Once again you add beauty to my life with photos and words. I am grateful.

Phyllis! You are so creative! And, the leaves are BEAUTIFUL and so BIG!! How fun!! I sent Abby a big bunch in a card a few days ago, so she wouldn't forget what trees do in the Fall! Love the squirrel picture and the "meow", too!! Love you!

Phyllis,
Your kids are hysterical! I guess that's one way to keep Asya away from the boys when she gets older - soak her in onions & garlic. lol =)
Love you friend,
-Joanna

I love those craft ideas. I've been wanting to try doing something like that, but was unsure how. I will have to try the wax paper. How did you make the "garland" hanging down your bookshelf? Your kiddos are cuties!

Beautiful! And Phyllis, that is a gorgeous tea pot in your cupboard!!!

Still chuckling over Asya in the onion drawer.

Caryn, the garland was very simple. I just cut a piece of paper into strips and taped them together to make one long one. Then we glued pressed leaves onto it.

Anne, that teapot (along with about 40 others) belongs to our landlady. :-)

My son looked at the picture of you and Jaan and thought that you were me.....
It looks like alot of fun!

Thanks for sharing -- those are terrific! I've been avoiding ironing leaves with the kids -- maybe it's time to try. And I love the glycerine idea. Wonder if I can find enough leaves that are still alive....

My little Savannah loves playing in our onions and garlic too. How funny!
Laura