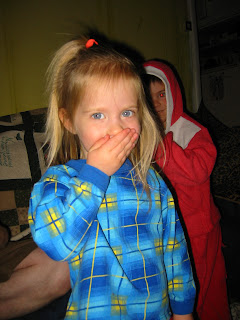 Last night was the first night of Advent in our home! While the children and I waited in their bedroom, Will hung up a string of lights, set up a beautiful Good Shepherd nightlight from our friends in Russia, lit candles, turned on music, and hid the bag for them to find. They were so excited to come out and see the changed living room! Poor Asya wasn't really feeling up to much, but she did enjoy the lights. 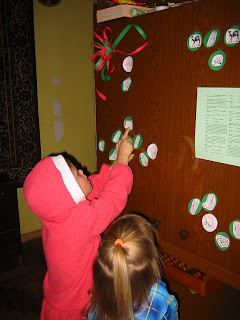 After a few minutes of just looking, we turned over our first letter. They had been curiously peeking at the backs of those circles, so they were glad to find out what they're for.

Next they found the bag of little coins, with this note:
"25 kopecks! There are also 25 days until Christmas, when God gave us His best present. Jesus told about one woman's gift and the way she gave it. Read: Mark 12:41-44."
Jaan sorted everything out and found a 25 kopeck coin for each person to hold while we read.  (Baba Julie is sending us quarters, but they haven't gotten here yet, so we started off with kopecks.  Ukrainian 25 kopeck coins have a nice big 25 written on them, which is nice.) 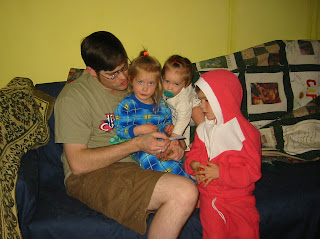 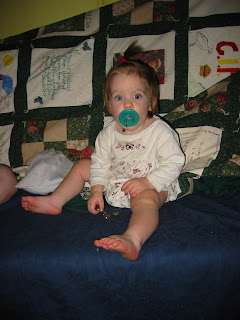 From there we moved on to the idea of giving, Jesus' upcoming birthday, and how we can give Him a present. Giving fits right in with the night's lesson. A recent Christian newspaper featured a mission called Agape. I was impressed by what I read about them. After the articles, there was a column, topped by the verses where Jesus talked about how when we give to anyone in need, we are giving to Him. And then there's a list of physical needs of the orphans that Agape works with. 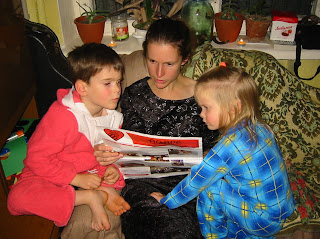 I brought out the newspaper and read off that list: clothes, shoes, toys, school supplies, etc.  Of course, Jaan and Raia heard TOYS.  So, that's what they're planning to get for Jesus' birthday.  Jaan says that we need to buy a bow and arrow for an orphan.  But then he changed his mind and said that we need to make one.  He wanted a set that he saw in the market for a while, but then Will helped him make his own.  Last night he mentioned the bow and arrow at the market, but then he said, "No, we need to make one, because homemade is so much better!  The ones at the market break too fast."  That's exactly how we talked him out of saving for one for himself.

So, we'll see what they end up with.  Raia's idea is a ball, and that might be a good one.

Our children are a little too young to really be working for money on their own, but the coins from last night will be the beginning of their collection. They're already talking about how they can add any change that they find, and I know we'll be putting some in, too. If we lived elsewhere, we'd probably do an Operation Christmas Child box or something tangible like that, but that doesn't make sense from here. I think what we found will be just right.

(P.S. Do you like the way I decorated for the season here?  Will says that it's too plain, but that's kind of what I was going for.  After the last fancy look, I wanted something a little plainer.  No one with dial-up ever complained, but all that really took a long time to load.  What do you think?  Any design suggestions?)

I actually like the new layout. It can become fancy again next season.

Are you following the advent from Holy Experience? (I mean, the one she's following.)

Just wanted you to know THE BABY IS CURRENTLY HEAD DOWN!!!! I know it's still early, but pray that it stays this way! This is one active baby, and I don't want it getting any wrong ideas about which way is out. ;) Thanks!! Lots of love, Shae

I like the new layout. It is always fun to see the changes you make and this version is easy to read.

No, we're not doing the same thing as Ann. Her ideas are a little too old for us. . . so far. We will someday!

Shannon, I'm almost as excited to hear that as I was about the first news that you're expecting! I'll grin all day long! :-)

Hi! I like the layout! It is easier to read. And, I love the advent tradition you are following! The children are learning the true meaning and value of what Christ did for us and of importance of giving to others. Lots of love to all!