By Phyllis
Our children have been referring to December 25 as "First Christmas" and January 7 as "Second Christmas." That sounds better to me than Catholic Christmas (since we're not Catholic) and Russian Christmas (when we're in Ukraine), so I'll go with it. Our First Christmas was a very busy day, because it fell on a Sunday. We spent more than eight hours at church!

So, our First Christmas started off with one of my favorite Christmas moments every year: discovering that the manger is no longer empty! We bring out the navitity figures one by one throughout Advent, but Jesus doesn't appear until Christmas morning. 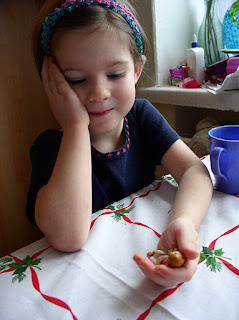 We didn't have much time at home, but we did eat pistachios and open Christmas cards from my grandmother and church. After a special breakfast of scrambled eggs and cinnamon rolls, we left for church for the Christmas service. 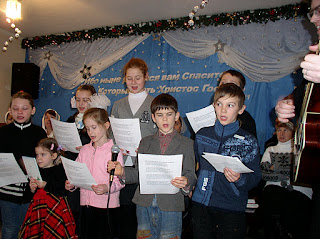 The children sang and recited poems 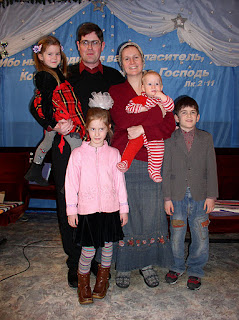 We actually got a family picture!

Then we came home for a lunch and a short rest. Soon it was time to go back to church for an evening teatime. Our children and I had baked all day on Christmas Eve to do our part in preparing for that. The youth had worked hard to put the whole program together. 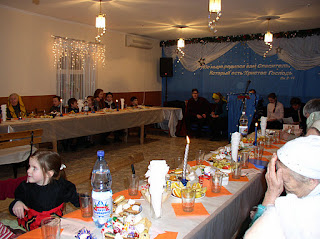 Since other people were using our camera, I posted all the photos from the tea. It was a long, full evening of celebrating Christ's birth. Again, the children sang, the youth sang, people shared, there were games and skits and carols, and lots of treats to eat. Bogdan especially enjoyed that last part.

When they finally poured the tea and started eating, he put his mouth down on the table and used both arms to sweep apples and bananas into his mouth.

I think this was the longest, most intense Christmas day we've ever had. Even the next morning, both Will and I were literally barely able to move. We're used to the Christmas season being a marathon, but not all in one day! It was very fun, though, and I certainly felt like we celebrated Jesus' birth.

We were able to have a much more relaxed family day after that, more like our usual First Christmas. I'll post pictures from that later.

Now we have the New Year's fun to look forward to, and then Second Christmas, with a children's service and caroling....

Great pictures! It's nice to get to know your family a bit better!

I always love reading about your sweet family. I especially love Asya's face as she thinks about Jesus. I hope you get some much needed rest soon. Love to all.

Wow! What a day! We didn't get the scope of it from our conversation on Skype! I'm sure you were all exhausted, but what a day of ministry! Love you all!

So glad you got the family picture... the one you'll treasure most as the kids grow...

I just call it Orthodox Christmas, but 1st & 2nd Christmas certainly males more sense for children. =-) And I was wondering how you had gotten so many pictures at church. That was a great idea to have other people take pictures on the camera! =-)

Well, Orthodox Christmas doesn't work for us, because all the Protestant Russian churches that we've been involved in celebrate on the 7th, too. It's a Biblical mandate, you know: "Rejoice and AGAIN I say rejoice." ;-)