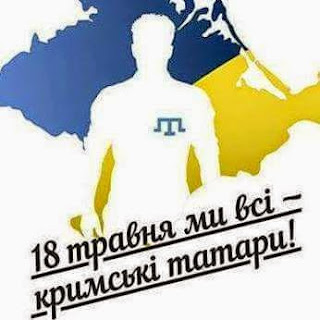 Yesterday was sad the anniversary of their deportation, not a day that I would have noticed a year ago. Now I know.

We love our neighbors, and we have so enjoyed getting to know a bit of their culture since they moved here last year. Right now, they're visiting relatives back in Crimea, but three of their friends are still here in the other half of our house. One is a younger woman who has seemed so shy that she's almost afraid of us. Yesterday she came to get me, though, because the washing machine was "acting strange." She's never used one before coming here, so she was baffled and terrified that she had broken it. Hopefully she won't be so scared of me, now that we've spent time together, lying on the bathroom floor, feeling around the insides of an ancient washing machine, looking for its filter.

At times I think it's a little funny that we get to be part of introducing them to Ukrainian culture and sometimes to city life, but maybe that makes sense, since we're foreigners, too?