My impressions of the conference...

For me, the best part was hearing Nikolai Kuleba speak. He is the president's commissioner for children's rights--or something like that--and also a strong Christian. I missed the first bit of what he had to say, because of Bogdan's nap time, and when I came in he was mostly just presenting statistics, hard statics, too. Honestly, they're just sad. But, what was so encouraging was that here was an energetic, optimistic, influential person who actually has plans and authority and (some) resources to improve child life in Ukraine. Someone needs to figure out a way to clone him!

He was encouraging about what can actually be done and the direction that orphan care is headed in already. I have admired him from a distance for a while, but hearing him in real life cemented that for me.

One story that he told was that recently he was explaining to another official about his plan to close down a special needs orphanage by building family homes instead. The woman he was talking to said that she knew just the people to live in them: "There's a church there...." Of course, that's what he was already thinking, but she was the one who said it, and she's not a believer. The church really can be the ones to take care of orphans, if we'll just get moving and do it! 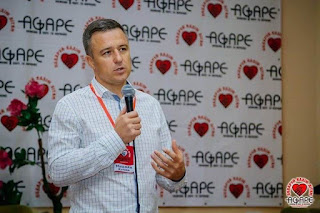 Other than the times that Kuleba spoke, there were updates about Agape's ministries, sermons and teaching on 1 Corinthians 13, leaders' meeting (not for all of our family, just Will), worship times, prayer, and fellowship with people we knew or were just meeting from all over the country.

Also, I already mentioned that we didn't have any travel mishaps. That was a huge blessing, and maybe a first, too. It was a good bit of traveling, overnight trains and five hours in a marshrutka each way, and it all went fine. Thank you, God!

Thank you for recording your impressions for us. We are grateful this was a good time for your family.

Hi! So happy to hear this encouraging report! And, yes, the church is the one to do this and many other things in the lives of needy people! We pray with you that we can do more and more of that here and in Ukraine and all over the world! So glad to hear that you had safe and uneventful travels, too!! Love to you all!!