The people at ZAGS today were very nice, which is a direct answer to prayer. They were very surprised that we had such a hard time in Moscow, and kept telling us that they weren't going to refuse to give us a birth certificate here.

The woman in charge of birth certificates had never dealt with a home birth or a family where both parents are foreigners, so she went straight to her boss. The boss didn't know what to do either, but she found out by calling Vladimir, which is the capital city of our region. Apparently all we need is to have the doctor who wrote our letter come out and sign in person (not very likely), or have her letter notarized. Will is probably going to have to make a trip to Moscow to do that.

So, I'm a little sad, because this new delay kills all my hopes of a trip to Romania to see my sweet Daniela and renew our visas. But I'm also very encouraged by the kindness of the officials here and by how close we seem to be to getting this birth certificate. 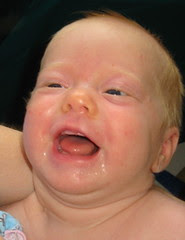 A smile?
Originally uploaded by fylliska.
I had Will take several photos, trying to catch a smile, but Raia was too fast each time. Does this one count, though? It's pretty close.

Oh, Phyllis! I am so glad the officials seem to be cooperative there in Kovrov. But, I am sad for you, too, that you can't go see Daniella! I know she would've have loved it as much as you all! But, the Lord knows... maybe another time... Love and Kisses to All!!

My heart hurts for the death of your dream, but oh, how thankful we are that you are making progress in getting Raia's birth certificate!

We love each of you dearly--Mom

Phyllis, you and Will are such strong children of the Lord. May the Lord bless your perseverence! Praying for the rest of the journey of getting Raia's certificate to go smoothly.

OH I forgot to say, I loved that beautiful smile on little Raia's face!! :-)