By Phyllis
If Jaan's little legs aren't slightly sore today, I would be very surprised. He's been practicing riding his tricycle back and forth on the balcony for over a week now. Yesterday he and I took it out for his first real ride. He rode until he was crying because his legs hurt, but he wouldn't stop until we told him that the tricycle was tired and needed to rest. He had so much fun! And he rides like a pro now.

Today we're headed out to the woods to see if the birch sap is flowing yet. . . . 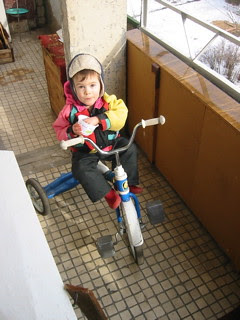 Snack time during a practice session
Originally uploaded by fylliska.

Hi! That's great! He'll get a lot of fun out of that! Seems like I remember Will going at anything until he would fall down in exhaustion!

Phyllis, your parents are coming to visit us! Did you know? We are very much looking forward to it! The "MPs" are getting together for some nice fellowship!! Much Love to All!

We hope the tricycle continues to bring him so much pleasure; I am very thankful the weather is reaching the point where he can use it outside.

Is the birch sap ready?