Look what we got 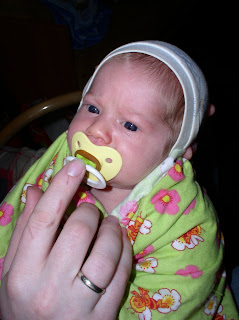 A pacifier!
I have really mixed feelings about pacifiers. When Jaan was a baby, I was totally against them. Fortunately, he helped me. When people tried to give them to him, he screamed. Raia didn't like them either. Later she started sucking her finger, though. Here there's only one thing worse than not giving your baby a pacifier, and that is letting her suck her finger. So, after about two years of hearing what a terrible mother I am, Asya got a pacifier. Anything to avoid the dreaded finger! (Or, actually, to avoid the scoldings that go with finger sucking.) And it worked beautifully. She had her pacifier until a little after her first birthday. We got rid of it with hardly any fussing... and then two weeks later she started sucking her finger. (And don't tell anyone, but she still does at age 3.) Oops. I lost all my good mama points right there.
Bogdan is only three weeks old, but I'm already getting tired of being greeted with "Congrats on your new baby! Where's his pacifier?" I bought him one today, and we'll see what he thinks of it. I still don't like having a foreign object sticking out of my baby's mouth, and I don't like chasing down pacifiers. If it makes him happier, I don't mind, though. Maybe it will make the general public happier, too. Although, of course, I'm much more concerned about what my baby needs than what "they" think.
I did ask on Facebook what people think of pacifiers, and it was fun to hear all the different experiences and opinions. In this part of the world there's only one opinion: You Must Give Your Baby a Pacifier or You Are a Very Bad Mother. What do you think?

i had one baby who didnt take pacifier or fingers or anything. The other had the passie till past 3. :( when we took it away, he stopped napping. It really really helped him sleep. i have mixed feelings, but i should have tried to get him to give it up before 3. but his teeth are fine now.
someone said- you can always take a passie away, but not fingers. :)

I love hearing about the differences in culture there. Do you get alot of comments for having 3-4 kids? I remember you mentioned before that they tended to have smaller families there so I was wondering how more kids went over.

When you were born, we were determined "no pacifier" parents. One night after you had screamed many hours, Bama took a bottle nipple, filled it with cotton, and allowed you to suck on it. Blessed sleep! The next day we went out and bought a pacifier. (Then, of course, we traumatized you when it was time to get rid of it, but that's another story.)

Regardless of what anyone says, I see you as one of the best mothers I have ever had the privilege to know. Keep up the good work--pacifier or not!

We love you, Honey.

How funny, in some circles here if you give your baby a pacifer you are a bad mother. Everyone gets too worked up about their own opinion... in my opinion. LOL Happy and content baby is all I want (my own). :)

When RB was born Bruce read that a pacifier is fine until 3 months (who decided that magic number I don't know). Being Bruce, at 3 months he took the pacifier away and RB immediately started sucking his thumb (just like his mom). He's 18 -- no pacifier, no thumb and seems fine! Then there's the potty training wars :)

Phyllis, I will try to post after I complete the lactation counselor course I am taking this week:) It is a 40 hour course and I have to prepare for the exam on Friday. But we have covered that topic already.

But I will state the obvious, they are appropriate for full term healthy babies only after the milk supply is firmly established.

You know... after it is all said and done, I think each child is different and neither pacifier or finger make much difference. Pacifier can be taken away. But, it's almost like finger/thumb-sucking is genetic or something. I believe we had one who thumb-sucked until she was about ten. She has beautiful teeth now after braces. Another one had the pacifier and also had to have braces!! So, who knows! I'm not sure it really matters!! (I think we get much more "mellow" the older we get!!) And, Bogdan reminds me SO MUCH of Will!! Wow! Love y'all!!

In so many ways, I aspire to be like you, pacifier or no. ;)

So cute and sweet. Congratulations on your newest edition to your blessed family.

I always pushed for a pacifer so they wouldn't suck their thumb as I had a cousin who sucked her thumb even in Jr. High & a nephew who was sucking his into kindergarten. I always took it away around a year & none of my kids moved on to their fingers.

That's interesting that a paci is a cultural necessity in Ukraine. C10 was just a year when we arrived, and I don't remember that being a big deal. . . then again, I didn't have a lot of friends with babies.

The babushkas DID worry about his spine when they saw him in my sling -- but when I explained it was like in the womb and he was getting plenty of exercise outside the sling, they were reassured.

I enjoyed all the comments here. :-)

Tracy, people do notice our family size, but not nearly as much as they did in Russia. Here four children is unusual, but not unheard of. In Russia two young ones was weird, and three was enough to stop traffic.