By Phyllis
And he's big! Unfortunately, I'm not entirely sure, but I think the nurse who weighed Bogdan today said that he weighs 4.5 kilograms. (I'm not used to them keeping the records there; I thought I'd be able to read everything when we got home, but they don't do that with babies. I should have listened better.) That would mean that he's gained more than a whole kilogram since he was born! I would believe it, because he's really filled out a lot. Asya was born weighing about 4 kilograms, and I had noticed that his round cheeks have caught up with what she had. 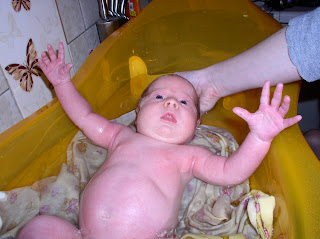 Last night's bath
Look at his round tummy. You can't see them, but he already has rolls on his thighs, too, instead of the little chicken legs that he was born with.

Goodness sakes alive!! He's a big one! How does that translate into pounds? He is certainly not the little bitty thing his papa was at one month! Love to each one!