By Phyllis
Our visa invitations were ready in record time! It took less than a week for the church to write up a request and the religion and culture people to approve it. However, when Will went on Thursday to pick up the letters, there were some really big mistakes: they had us listed as living in a completely different city. He spent the day resubmitting in order to get those fixed. They probably thought that he was crazy to bother with corrections, but we really want to get everything right, as much as possible. Please keep praying for our visas, and for everyone else who is caught up in this now, too. It's much more complicated in some other regions of Ukraine, and March seems to be the month when everyone is renewing.
Bogdan has two new teeth! If these come all the way through, before he gets any more, he's going to look pretty funny. Several of our children have gotten first middle bottom teeth, then outer top teeth. (I just checked; it was Raia and Asya. Maybe Jaan got his in a more normal order?) Bogdan has his own funny order, though. He has the two middle teeth on the bottom, and now he has... how I do explain this? If you imagine the top, center teeth as 1-2-3-4, then he has 1 and 2, but no sign of 3 and 4 yet.
A group of homeless dogs tried to attack Jaan on his way home from music school a few days ago. They didn't hurt him much, but he was very shaken up, and he's very fearful now. He doesn't want to walk back and forth by himself anymore, "At least while the dogs are especially hungry," and I don't blame him.
We had our 11th anniversary! Apparently it's becoming a tradition to work on visas for our anniversary. 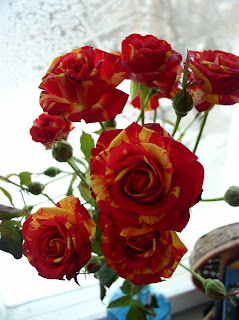 Pretty!
Our hot water heater had pretty much stopped working. When the plumber came to look at it, he cleaned this kind of stuff out of it: 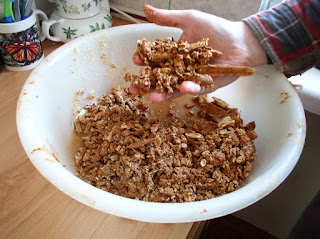 Yuck!
That's after just a few months. The city water comes up out of the iron mine. Every time they turn it off, it comes back on dark reddish-brown. Apparently, we need some kind of filter.
One evening recently Jaan was looking through an advertisement from Metro, the big store that has everything, and he said, "Mama, I know what you need! One of these exercise machines! ...or one of these boxes of chocolate."
Do all four-year-olds wander around singing about embassies? (Asya does.)
I recorded part of a reading lesson, with Raia and Bogdan.
The temps here went up a little, then dropped off again. I'm happy. We've been spending time at the sledding hill almost every day, with a few longer walks thrown in. I got some pretty pictures on one of those walks. If you haven't seen them yet, here they are: one, two, three, and four. 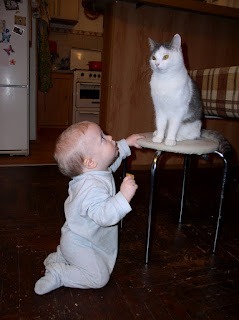 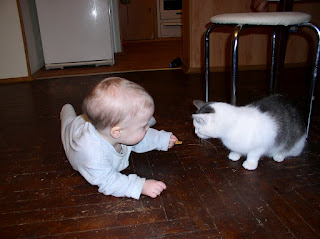 Bogdan is very generous
Posted at 13:38

Newsy post...thank you. Is Bogdan the cat's favorite person? Can you get a water filter? We love you dearly.

So glad that Jaan wasn't hurt badly by the wild dogs! But, that will leave a lasting impression. I am so sorry it happened!

Praying for your visa renewal process! Keep us posted. Love you all!

Cute pictures. I'm glad you found my blog! I'm going to really enjoy reading about your adventures in Ukraine!!