By Phyllis
There are a few busy concert seasons for us each year, but right now it seems like more than usual. (And I'm imagining what next year will be like, with Asya in music school then, too... probably in yet another department. We'll have three children, in three different departments, with concerts for each?!) With Jaan and Raia playing together lately, that means they both perform at piano and folk instrument concerts. I guess that could still be the same number of concerts as it was before, but two children to get ready for each now, instead of one.

Just this month, we've had:
Today Jaan, Raia, and Asya went to the oldest balalaika student's graduation recital, just to listen; no performing for them this time. I stayed home for Bogdan's nap, so that's why I have time to compile all this.


I didn't know if we'd have anything from the contest, but one of the moms got this video and sent it on to me:

I did take this photo after they came home that day: 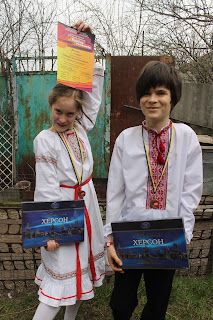 Also, there are these two news clips about the contest, although Jaan and Raia don't show up in them. More than 500 children competed! And I'm scanning through long videos of the two-day competition to see if they might be in one of those.... There. I found them: at 14:14ish in this video. (The boy who played after them also studies with the same teacher as Raia. He's the one they went to hear today.)

Other photos and videos from our camera:


More from Raia's teacher and the music school:

Spring break starts Monday, so we're done with concerts, I think. At least until the end of the year rush.
Posted at 15:27

Wow! You all HAVE been busy!! And, Bravo, once again, to our budding musicians! BEAUTIFUL!! I am so glad that they have all of this musical opportunity and the love and ability they show! Such a blessing!! Praying for you all and so excited that Anna will be able to visit for a few days! Hope you all have a great time and we will be praying for your safety in travel and training, as well! Much Love, Julie/Baba/Mom