Baptism of the Lord

When I mentioned Baptism before, this is what I was talking about. Bogdan didn't remember or hadn't been to a blessing of the water, so I wanted to be sure and take him this year. On January 19, when we celebrate Jesus' baptism, everyone else in our family was busy, so just he and I went. The week before the Dnepr had been frozen, and because of that I told him people would be jumping into a cross cut in the ice. Apparently there was only ice at one park this time, though, not where we went. (The river completely froze over again right after, too.) He kept asking me where the cross was. He was fascinated by everything, the procession down to the water, the prayers, the Cossack carrying the cross (he had a sword!!!), all the swimmers, and being blessed--soaked!--by the priest himself. 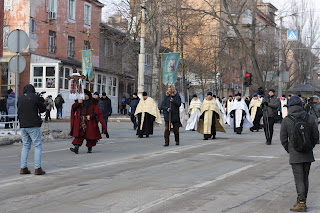 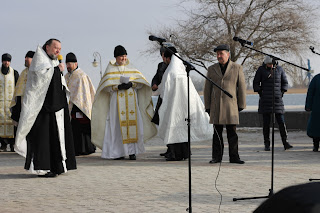 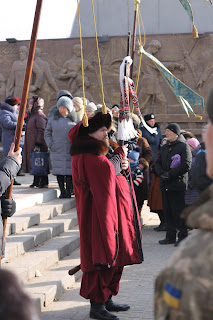 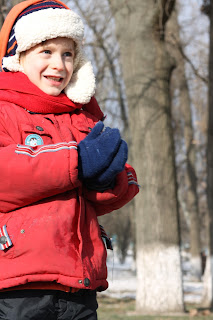 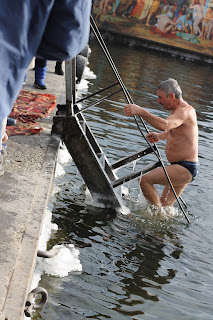 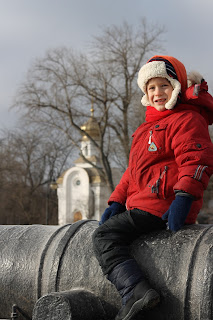 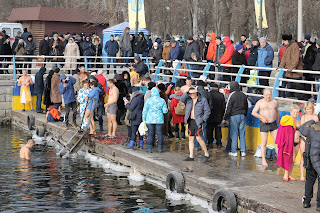 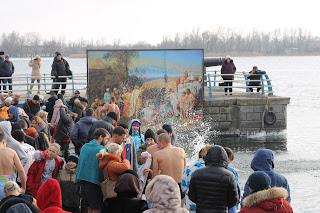 Then we went to a cafe to warm up. I ordered hot chocolate for Bogdan, but they were out of it and offered decaffeinated (!) coffee. I wish I could have gotten a photo of him with his own tall latte and huge plate of cake. Again, the cake wasn't exactly what I was thinking; I just ordered it, thinking we'd split a piece, but the waitress assumed that I wanted two portions. When they brought it out, his eyes got really big, and he said, "Better not tell the girls about this" (i.e. they would be jealous). We had so much fun together, just the two of us. Now I think he'll remember, both the story of Christ being baptised in the Jordan and the tradition of blessing the water now. 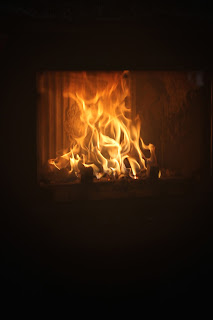 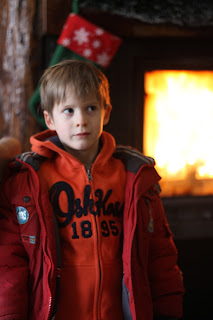 What a wonderful, special day! Thank you for sharing it with us. Love to each one.

Thank you, Phyllis! This was so interesting and so special for the two of you! I love the thought of Bogdan w/ his OWN tall Latte and piece of cake! I could just SEE his expression and HEAR the "better not tell the girls about this"! (: I loved seeing his Osh Kosh hoodie, too! That makes me happy! Love you all! PS I do NOT see how those folks get down in that water!! It looks SO COLD!!