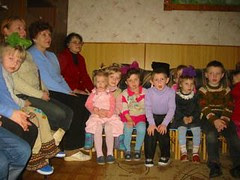 Raia and her new friends
Originally uploaded by fylliska.

We did get to go to the shelter! I really enjoyed being with all the little children; we had expected more older ones. We were also surprised to walk in and see our landlord's daughter there. She was thrilled to have us come visit her. At least, she assumed that we were there especially to see her. Please pray for her and her father. I don't want to say too much about their family life, but we've been praying for them for a long time. Things aren't going too well, and it's sad to see her away from him, in a shelter or orphanage. Her father has already called this morning and thanked us for spending time with his daughter.

Also, there was a group of Americans who visited the shelter with us. Afterwards Will went on to Ivanovo with them as a translator. We laughed at the difference between our friends Pasha (the pastor here) and Vanya (the missionary in Viazniki). A few minutes before we were set to go to the shelter, Pasha called and said something about "Vanya would like to take Will to Ivanovo, so think about that. . . maybe. . . if you can. . ." Then, Will called Vanya, and Vanya said, "So, have you heard that you're going to Ivanovo?" No questions, no other choices, no "think about it." That's Vanya!

He was tired of driving the American group around and not being able to communicate with them. Even though Will got home really late, I was glad that he could go. When we jumped into the van on the way to the shelter, the group turned to us and said, "You speak English, right? Then tell us, where are we?!?" I was confused for a minute, and then I realized they were asking what city this was. And then they wanted to know where they had been earlier in the day!
Posted at 09:02

That is TOO funny! Those people couldn't tell you were Americans! And, poor things! They didn't know where they had been or were!! What did they say when they realized you were Americans and where were they from and who were they with? (Church, organization, etc) We are SO blessed to have our own personal translators when we visit!! (: And, we will certainly continue to pray for your landlord and his daughter! I still have the little vase of flowers she made for me on my dresser. Love to all!

I am assuming the fact you went means Raia is well again. PTL! Love you....

The photo shows up on your photostream. The children are very cute and seem to be enjoying their new friend, Raia! I'm glad I'm not in Russia without a translator :0

Fylliska, yes, please walk me through adding feedblitz...do you mean over the phone? Or over e-mail? I don't often have internet access now, and life is a little crazy, but I would like to add it, if I can work out a time. Let me know! Love you! P.S. love the family picture and how you've compromised by changing your entry pic. =)I'll have to send you our first family Christmas picture too.

Thanks for your comment on my site. Glad to hear that your little one is well again. Our whole family is down with the flu. You asked about the little one's age ... Dear daughter is almost 6 months old. I don't know how much she is getting out of my alphabet lessons, but we both seem to enjoy them.

I wish I could have studied more literature myself. Pregnancy cut short some of my plans with my degree itself. Sometimes I'm amazed at how little one has to learn to get a degree. But perhaps it is to get you 'hooked' on the subject and you spend the rest of your life fleshing it out. I have a ton of things I'd like to read now at least!