By Phyllis
Let's go back a bit, so that I can write about what a wonderful day December 25 was here. Apparently I didn't take many photos, but I did get some. I already posted a few of them and three videos on Facebook: "A very musical Christmas."

We started off with a Christmas breakfast, but I didn't prepare much, because we had to leave for church. So it was just a breakfast casserole and pretty table setting, but it already felt festive. 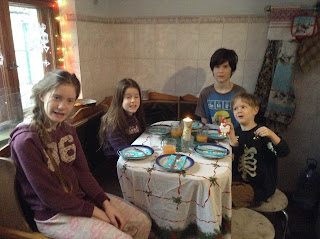 At church the symphony orchestra from Kherson State University put on a full concert. They played music from Mozart, Brahms, something operatic, something ragtime, and more. Raia and Asya were practising with the church children's choir for most of the time, but they came in for the last few songs. Asya walked in during a piece for written for a typewriter (really!); she listened for a minute and then asked me what kind of instrument it was. 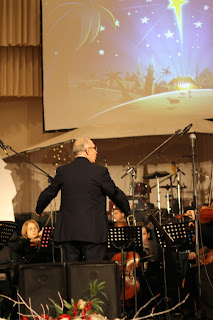 After the concert the church served plov and then tea with desserts that everyone in the church had brought. 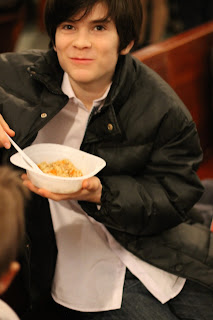 Then it was time for the Christmas service. Most of the children who study at various music schools played their instruments. Asya, Philip, and Yulia played the carol of the bells. Raia and Karina did a duet. (Both those videos are at the first link I gave.) The choirs sang, too, of course. 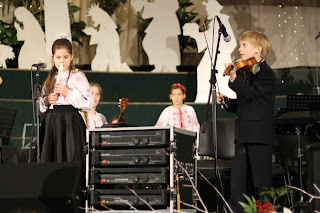 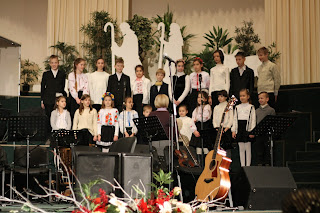 It was pretty late in the afternoon by the time all that was over. We came home, rested some, watched a movie like we usually do on Sundays, and talked to Will's family on Skype. We definitely felt like we had spent the day celebrating Jesus' birthday!

A beautiful, celebratory Christmas, indeed. Thank you for posting. Much love to all.

Thank you, Phyllis! It is so nice of you to include all of us on these wonderful events!! We so love seeing it all! Love to you all!!