Monday in Riga (and Kovrov)

By Phyllis
Will was able to do everything he needed to do all in one day, so he's already on his way home!

He'll get in at a much more decent time than usual.


If you want to hear about our trip in detail, here's the first installment:

Last Sunday we started out for Moscow early in the morning. When we arrived, we went straight to the church that Nathan attends, to meet up with him and be at the service. Afterwards we went to his apartment and spent the afternoon with him and Masha. That was a nice break between trains!

In the evening we ran off to the overnight train to Riga. 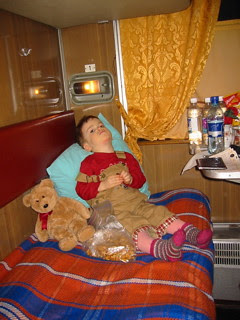 Jaan relaxing on the train
Originally uploaded by fylliska. Will and Raia, also on the train
Originally uploaded by fylliska.

Jaan insisted that he could not and would not sleep on a train, but he went to bed very easily. Raia was another matter; she desperately wants her own bedroom, and she made a point of reminding us about that. Eventually we all got to sleep, though.

They woke us up for the border crossing. On the Russian side everyone tiptoed around us because of the children, but the little ones still woke up. Jaan just stayed still and quiet, hugging Mi-ka and watching everything with big eyes. Princess Raia thought that everyone was coming in and out for the express purpose of seeing her. She laughed, smiled, waved, squealed, and tried to be the constant center of attention. Once we got moving again, we fell asleep again quickly. . . only to be woken up for the Latvian side of the border. Even though they were much louder there, the children didn't wake up again. Praise the Lord!

When we got to Riga in the morning, we realized that I had forgotten to print out the map and directions to the hostel where we would be staying. Will tried to call, but only ended up getting the ambulance service, and they said that they didn't think we had a reservation with them.

We wandered around, asking for directions, and actually found where we were going very quickly. It didn't take long to settle in, eat lunch, and put two very tired children down for naps.

After they woke up, we went out into the very snowy city. 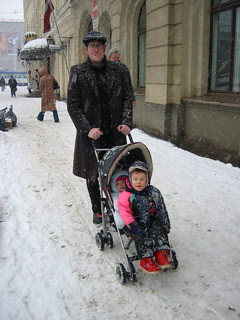 We walked to the Freedom Monument and saw the changing of the guards. Then we discovered the ducks who live in the park there. 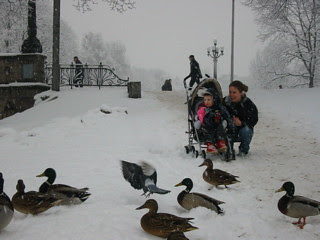 The ducks!
Originally uploaded by fylliska.

Jaan and Raia were fascinated. So was I!

Jaan also enjoyed one of the ice slides in the park. He was afraid to go down, but when Will just put him on it, he had a great time and begged for more. I'm sure people wondered about us putting a protesting toddler on the slide, but as soon as he would get moving, the fussing would turn to laughter, and he would get up from the bottom ready to do it again. 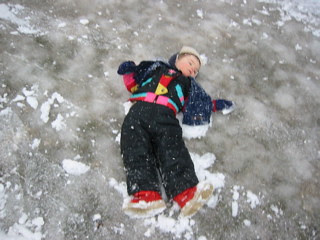 Jaan on the ice slide
Originally uploaded by fylliska.

By the time we had explored the park and a few nearby sights, it was getting dark, so our Monday in Riga was over.

Oh, what fun! It looks like such a great trip! I know Jaan and Raia really enjoyed the train. And, the ducks! I am also fascinated! I didn't know ducks lived in such cold!! I would also have loved to have Jaan on the ice slide. Did Will not do it, too? (:

We leave for Dallas and the GES conference this morning. Pray for a safe and fruitful trip, if you will. Love and kisses!

How I am enjoying your detailed account and the photos....Thank you! From the photo of Jaan on the train, he looks like he has grown noticeably since we were there.

What's an ice slide? All I see in the picture is what appears to be snow or ice on the ground. Are you calling a hill an ice slide, or is this a picture of a really wide slide with ice on it?
Love,
Grandda

Oh those train pics bring back lots of memories of our trips to Ukraine!! Looks like you made good out of what could have been a tough trip with little ones! :O)I'm curious too as to what an ice slide is?

I was just talking about ice to slide on down a hill. Dad, I'll send you another photo or two. . . .