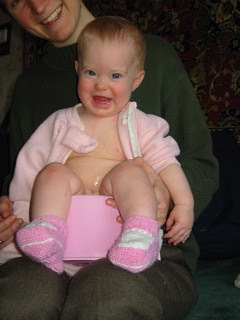 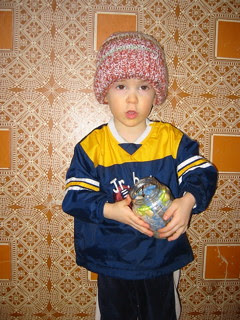 He wanted to show them to you. A few days ago we put some pumpkin seeds into a jar, so that he could see how they grow. Now anytime anyone comes over, they get an explanation of how the roots grow down and the leaves grow up, complete with a reenactment of what he has observed.

Will just had one little adventure yesterday, and everything else went smoothly. As a preface to my story, you have to know that when he left for the conference last week, I sent paper hearts hidden throughout his bag for an anniversary present. They had notes on them and some photos from the anniversaries that we've celebrated together so far. He still had the hearts with him on this trip. Somehow, he forgot to take Raia's visa photos when he got all her other documents together, though. He called me from Moscow, frantically trying to think of a way to get them, without another trip. (They don't accept emailed photos.) Then, a few minutes later he called back again, saying that they had solved the problem. One of the hearts I made was a photo of Will and Jaan on our anniversary two years ago. Apparently, Jaan looked so much like Raia, that they're going to use that picture for her visa! When Will protested that it was the wrong child, "The Visa Guy" said that a baby is a baby, and they sure look a lot alike.

God is so good to work out details like that and save Will from having to make yet another trip to Moscow!

Now please pray that the rest of this will go smoothly.
Posted at 12:25

Hi! I love the story about the visa photo!! Who would've thought that they would be so accommodating!!

The slippers are wonderful! You did a great job! Did you make Jaan's hat as well? Tell Jaan thank you for showing us his seeds! I hope they make many pumpkins!!(: Love to all!

Honey--How special to see completion of the booties we had seen you begin! Jaan's delight in his seeds so reminds me of you. I do hope at least one of them can become a pumpkin vine trailing around your apartment.

The visa story is great! Who could have known that God would take your gift of love to Will and turn it into the solution for a visa problem?

...and one of the best parts of the picture of Raia in the booties is that it includes at least part of your face, Phyllis. Thanks, Will!

Wow what an amazing testimony of how God used your special gifts to Will for another purpose!!!

The slippers are beautiful and just perfect for a little princess! :-)