Sorry it's been so long!

By Phyllis
Julie left Monday. She's back in Florida now and will probably be moving to Moscow in the fall. Hurrah!

Raia and I have been pretty miserably sick for the past few days, but we seem to be getting better now. 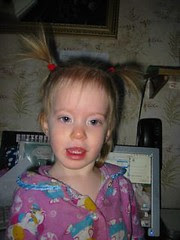 Poor baby!
Originally uploaded by fylliska.
Raia has started praying before meals. She's loved saying her version of Amen after prayers for a while now, but a few days ago she made it clear that she wanted to pray by herself before supper. I prompted her to say, "Спасибо, Бог" ("Thank you, God"), and she did! It just came out like "Би-ба, Боб. 'мимь!" (Even if you think you can't read Russian, you should try to figure out those few letters. It sounds really funny.) And now she says that before every meal.

So good to have a new photo--and Raia suddenly looks much more grown up.

I'll have to get the girls to translate for me!! Sorry, it all looks like squiggles to these over 50 eys!! It is so wonderful when children start to be able to communicate about the Lord with us, though, isn't it? And, I'm with your mom! She DOES look so grown up! Love to all!!

I hope Raia feels better soon! So miserable to be little and not feel well. Hope you guys get some good snuggle time out of it!

Yay! I saw Julie today! I got a hug in, but I didn't get to chat. She was chatting with others,