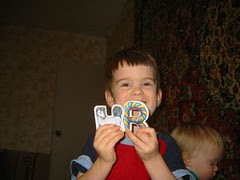 Jaan has finally learned the difference between Я and R! I have a cute little video clip that I was going to post here to celebrate, but I can't get it up. You'll have to do with this photo instead. When he looks at the backs of the these puzzle pieces, he sees his name in Russian. He's known that for a long time, but he insisted that R was the same as Я.

He has also been writing his name for a little while now. Or, actually, he writes Н--the second letter--because Я is too complicated. If he wants to write his whole name, he asks me to write the first letter, then he writes the second, and he's so proud of himself!

And, proud he should be!! Tell him BabaJulie still doesn't have his name figured out (in Russian)!! Thanks for the picture! Love you all very much!

What a joy that delighted expression brings me! Thanks for sharing.

Love to each precious one....

Way to go Jaan! And guess what, we have the same alphabet puzzle, Christian loves it, too! He's nowhere close to writing his name, though :) (in fact he can't even say it, but keeps referring to himself as "я" and "me". Oh well, he'll figure it out soon enough. He does recognize a few letters and I'm just so excited. Does Jaan know Russian or English alphabet? Or both?!

Olga, he knows bits and pieces of both alphabets. Of course Christian has trouble with his name! You gave him one with how many letters? :-) I hear that I couldn't say my name; I was "Siwus" for a long time.