As I had said, our first train of the day left early in the morning. Will had to be in Vladimir, so he accompanied us that far, and then put us on the express to Moscow from there. Jaan was so excited that all he could say was, "Train." I asked him, "Is this a special day?" His reply: "Train!" Or, "Jaan, how old are you?" "Train!" Even, "Are you hungry?" got the same answer: "Train!" 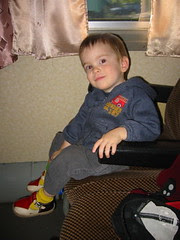 Jaan on the train
Originally uploaded by fylliska.

Both Jaan and Raia did amazingly well on the train. Even though we didn't have a ticket for Jaan, there were two free seats by me, so he and Raia each slept on one. Then we got into Moscow and had to take the Metro across the city. Again, I didn't have any problems. I really was amazed at how smoothly everything went. It was actually the first day in a long time when I didn't have to deal with any tantrums at all from Jaan.

We finally got to the training center. Susan had made sandwiches for all of us, but then left them on her kitchen counter. We really had planned to try not to disturb the Sullivans on their first day back in the country, but we ended up completely invading their apartment to make more sandwiches. Of course, that had the added advantage of getting to spend some time with them, too. 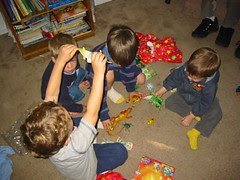 Giving Jaan his presents and helping him with them
Originally uploaded by fylliska.

The kids all ate and played together on the floor and gave Jaan presents and generally acted like a well-behaved little hurricane for a while. I thought it was really cute and sweet how excited they all were to be able to give presents. Then Susan got out the cake that she had brought, and the Sullivans added little car-shaped candles. 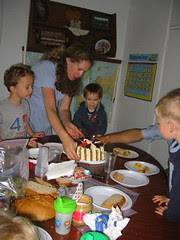 The Cake!
Originally uploaded by fylliska.

Jaan was very unsure about it, and just stood there for a little while. 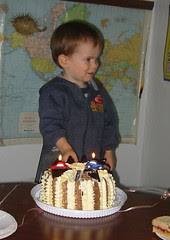 "Uncle Dean, what am I supposed to do?"
Originally uploaded by fylliska.

Finally, after some lessons from Irvin and help from Dean, Jaan got the first candle blown out. Everyone cheered and scared him, but now he knew what to do and blew the second one out. I think he had to have help with that one, too. And then he got to eat some! He's still"talking" about it, by telling us that something is hot, then huffing and puffing like the Big Bad Wolf, clapping and cheering, and finally saying "Nyum-nyum." 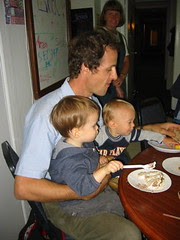 After that, the men took the kids outside again, while we cleaned up a little and talked. It kind of felt like we barely got started. We had a whole year to catch up on. Still, it was wonderful to be together, and I hope we'll be able to do it again next year. Maybe somehow we'll even be able to see each other again before then?

Hi, Phyllis! It's nice to have such wonderful friends, isn't it? And, I can just picture you all having a big birthday at the training center! What a great way to spend a second birthday! Much Love to All! Julie

Honey--I had not realized the Sullivans had been at Jaan's party as well, what an added joy. Maybe next year for his birthday all of you can be together overnight. Thank you for making us part of the occasion by photos and story. Much love to each of you....

Oh what a fun day!! Jaan had a real adventure!! We once celebrated a birthday in Moscow! We happened to be there for Fr. Christos (my dh's birthday). I can just imagine you all on the train and metro etc... That cake looks delicious and Jaan looks like such a big boy in having a grand day! May God grant him Many years!!