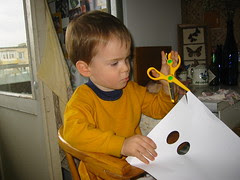 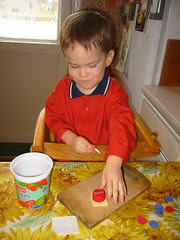 Making circles
Originally uploaded by fylliska.I don't really believe in formal preschool, but we have been having some school-ish fun lately. Jaan has been fascinated with scissors for a while, and now he finally has his own pair. He loves to practice with them. We've also been talking about colors and shapes a lot. He doesn't seem to have learned any of them, but he loved making cheese circles. (That's what he was doing in the picture.)

I was thrilled recently when we were outside, collecting fall leaves. Jaan had his little bucket with him. I suggested that he put only yellow leaves into it, and after asking me "uh?" a few times as he held up different ones, he figured out what I meant. He brought home a whole bucket full of yellow leaves.

Maybe we don't do preschool, but that doesn't mean we can't have fun learning!
Posted at 14:16

It is with great joy we observe Jaan at "preschool." With the activities you provide for him, you are laying a critical foundation for life and learning. And nothing compares the intensity of a focused preschooler.

Keep up the great work! We love you all--Mom

The look of deep concentration on Jaan's face is just precious! Preschool is hard work! : ) What a sweet little boy!

I would love to see some photos of the town you live in and the autumn leaves the next time you take a walk! Enjoy this season!

I LOVE the pictures! It takes me back to days of teaching kindergarten. My students were just a little older! Is Jaan left handed? He's holding the scissors in his left hand! Or, has he "decided" yet? What fun! Tell him Grandma Julie will be there soon to sing "little people" songs with him! Much Love to All!