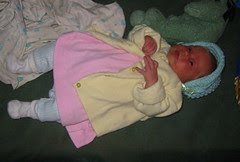 Ready to go to Moscow at about 4:00 am, wearing Grandma Kathy's sweater
Originally uploaded by fylliska.

A short summary: as I had said we were planning on "two days in Moscow to get Raia's documents." And, as you can see, we just returned from that last night, after ten days. We still don't have any papers for her, so we can certainly use your prayers.

If you want to hear more, keep reading. The trip is already something of a blur in my mind, but I'm going to try to remember and give all the details, for those who are interested.

Monday (a week ago): At 4:30 in the morning, we left to catch our train to Vladimir. I made the observation that I felt sorry for people who have to travel without a toddler. Jaan turned everything into an adventure. He had so much fun watching the trains and everything else! (Of course, there's a flip side to traveling with a toddler, too. It can be complicated by tantrums and constant potty breaks. We had never had tantrum problems until this trip, but now Jaan has certainly perfected the art of tantruming.)

In Vladimir we switched to the Moscow express train. When we arrived in Moscow, we met up with our midwife friend to get a doctor's letter that we needed and then went straight to the northern end of the city, to the ZAGS (registration office), where we planned to get Raia's birth certificate. We made that long trip, only to discover that they only register deaths on Mondays, no births. That was slightly discouraging, but we thought we could still get the birth certificate the next morning, and make it to the embassy for the passport Tuesday afternoon, in order to go home on Wednesday, as we had planned.

So, we went all the way down to the south to find the guest house we would be staying at. By the time we got there, we were pretty exhausted, so it was wonderful to find a friendly face waiting to let us in and a nice place waiting for us to crash.

Tuesday (Raia's three-week birthday!): we went back to ZAGS, and this is when we really started running into problems. The first woman took us straight to the head of that ZAGS, which didn't surprise us; that had all had to consult about us when we registered Jaan, too. Last time they just accepted the fact that American documents are different from Russian documents and registered us. Not this time! After a long consultation, we left with a list of things that we needed to do or get:
1. Correct the spelling on one document. (My name can be spelled two ways in Russian, and this lady wanted my doctor's letter to match our marriage license.)
2. Get a letter from the American embassy saying that my last name had changed to Hunsucker. (Our marriage license does not specifically say that my name has changed, like a Russian license would. Last time they just took the fact that all my current documents say Hunsucker as proof of that. Again, not this time.)
3. Get an official marriage license. We weren't sure about this, but the lady refused to give in. The only concession that she made was to call a meeting with her boss and a lawyer.

So, we left and started making calls to find a doctor who could write me a new letter, since the one who had written the first one was on vacation. We found one who could come that night, so we headed off to the embassy. They are always nice and helpful there, so we had the letter about my name change in no time.

Back at the guest house, we got in contact with my parents, and they started the process of ordering our marriage license. The doctor came, and not only wrote us the letter exactly as we needed it, she also prescribed some natural remedies for our colds.

Thank you, thank you for the details! We will be eagerly awaiting installment two.

Wow! I have heard all the "bits and pieces" or so I thought! This gives it a totally different spin! I felt so sorry for you all! We certainly continue to pray for you all and for your parents as they try to help on this side! All our love!