By Phyllis
Ready for a bunch of photos? 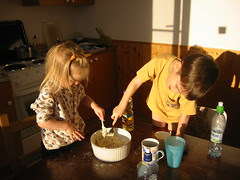 . . . for our pumpkin pie was the first order of business. (Look at the lighting! We had wonderful holiday weather: bright sunshine.) 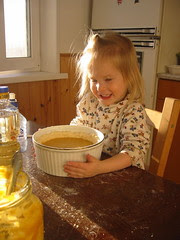 Ready to bake
Originally uploaded by fylliska.
Then we went on to making a craft, provided by our wonderful friends. 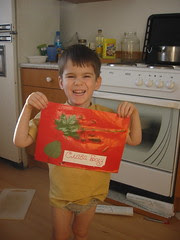 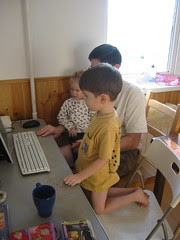 When we were done with our craft, Will, Jaan and Raia watched a movie about the first Thanksgiving, while I finished meal preparations. 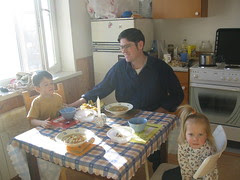 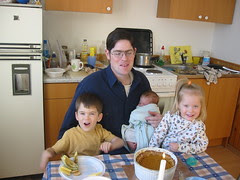 This is what I'm thankful for!
Originally uploaded by fylliska. 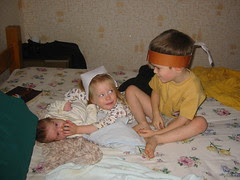 A Pilgrim, an Indian and a baby
Originally uploaded by fylliska.
After our own family celebrations, we were going to go visit our friends, but they called as we were walking out the door to say that their littlest had just fallen asleep, so we went for a walk instead. Raia was convinced that there were two moons. We could see one out the window before we left and another outside. Perfect logic, right?

When we got back we decided to try to take a Christmas photo, since we already had the children dressed up. All I will say about that is that it reminded me of a recent post by Liz.

And that was our wonderful Thanksgiving day. I hope you all had one just as nice!

(I added two-month-old photos below. And Carrie put up a few more of our visit together.

Hi, Phyllis! Thanks for the pictures! The flat looks pretty large!! And, it looks like you all had a wonderful Thanksgiving Day celebration, as well! Praying for you all! Love, Julie/Mom/Baba

Thought I'd stop back by on my way off the computer--and there you are in beautiful Thanksgiving color! It looks like your Pilgrim, Indian, and baby had a memorable day--as well as providing you with much cause for thankfulness.

thanks for posting all the beautiful new pictures!