Big girl and this morning 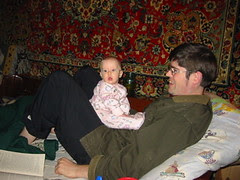 Sitting up?
Originally uploaded by fylliska.
These days Raia is trying very hard to sit up. She doesn't have the balance to actually sit up yet, but she certainly has the muscle for it! She won't lean back against anything. She's also becoming as expert at scooting. When we put her down for naps, we can count on her trying to crawl at least half way across the bed before falling asleep. And she's started "talking" again. Somehow I hadn't even noticed that she had stopped, but just yesterday she started up again. Of course, she was making noise, but we hadn't seen any of her serious, sweet lectures for a long while. Now there's an even wider range of sounds and expressions, and she goes on for even longer. 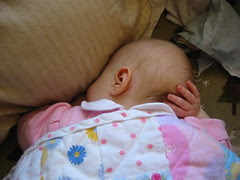 Asleep
Originally uploaded by fylliska.She still sucks on her hand, and now she's added putting the other hand at the back of her head as she falls asleep. Is she going to be one of those children who sucks her thumb and twiddles her hair?


Jaan's legs are still just slowly recovering from having someone ready to carry him at all times. Now that he and Raia have more layers, he really doesn't fit on the front of the stroller anymore. He and I went all over looking for a sled yesterday. My idea is to get him a light plastic sled, to tie behind the good sled that we already have. Raia can ride on the front one, and I can pull them like a little train. However, there aren't any sleds available right now.

This morning we were going to try to go to the central shopping center and see if they have any sleds there, but Jaan's legs gave out again. (Can you see me rolling my eyes?) I did figure out how to get him on the stroller; I took his scarf off and tied him on.

Now I have the strap from a suitcase to use when we go out for our afternoon walk, so I don't have to constantly untie and retie all those knots and put on and take off Jaan's scarf.

We didn't make it to the shopping center, but that's probably just as well, because we had a wonderful walk. I don't know how I would have gotten up to the third floor where the children's sections are anyway, with a sleeping baby, a reluctant toddler, and a stroller.

Hi, All! What a great idea! A sled train! I can just picture it! And, the suitcase strap is just the thing, as well. That worked pretty well to have Jaan ride up in front of Raia, I thought. But, it the snow that must be pretty tough! Hope you can find a sled soon!! Love to All!!

You must have posted photos first and have been in the process of writing when I visited earlier, because the blog would not allow me to leave a comment.

I expect Aunt Lindy will be very interested in reading about Raia's hair twirling.

We hope you find a sled soon.

As I scrolled down to see some entries I'd missed I did notice the comments about hair twirling! I was bald until I was two and still managed to twirl my hair and suck my thumb. I don't suck my thumb anymore but I sure twirl my hair (luckily I have a lot since I end up having to pull out tangles when I'm not too focused). I love seeing you all and seeing how much your weather mirrors ours here in Vermont. Love, Aunt Lindy