By Phyllis
Mom was asking about our wallpaper, and I meant to post before and after pictures of what Will did before his parents' visit. Here's the wallpaper this apartment came with: 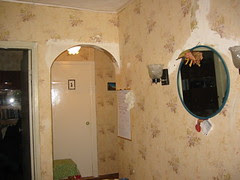 Before
Originally uploaded by fylliska.I didn't get a photo before Will put the arch in, though. 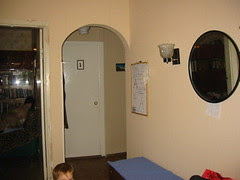 After
Originally uploaded by fylliska.The new wallpaper is just a plain (hurrah for plain!) beige with some texture.


Will's out putting up annoucements of the youth club that will be starting on Saturday. Then he has to go to the bank for Gospelink. From there he'll probably go back to getting ready for the club. He's already starting to get the room where the church meets ready by putting up a coat rack and decorating a little.
Posted at 10:13

I agree, hurrah for solid colors. Ya'll did a good job. They sure do love busy wallpaper here.

Big improvement on your flat! Congrats!! As much as I love everything Russian their taste in decor is not the best. I bet you are enjoying your beige!

Hi! I didn't realize that Will made the arch!! I am so impressed! He can do about anything he sets his mind to, can't he??? (Even if some of it IS "rigged", shall we say!! (: ) That's beautiful!! Much Love! Baba Julie