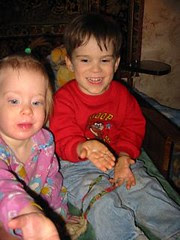 Raia wants some, too.
Originally uploaded by fylliska.

And right now Jaan is asking if he can climb the Christmas tree!

I haven't been quoting him as much lately, but he still keeps me laughing.

Last night (and all of yesterday) went wonderfully, even though we missed Will. He's back now, sleeping. Tonight we'll be reading
"December 14 - Don't try to eat this! It's sand. It reminds us that Jesus knows something about architecture, about buildings--and building lives. See His instructions: Matthew 7:24-29."

Yesterday we actually made it outside and stayed out for a long time. We've been sitting inside a lot more than I like to, but the mud was almost impossible to navigate with two little ones who fall into puddles. Yesterday was drier. One babushka just kept shaking her head over the fact that Jaan and Raia were riding a tricycle in December. It is rather strange! Most of the time we were outside we followed a huge flock of waxwings around. They're usually in pretty big groups, but this much have been a convention. I've never seen so many in once place, at one time. Raia was so excited! She would just stand, looking up, saying "тица! тица!" and then start trying to jump. I think she wanted to fly up to them.

Now Raia's putting her bears to bed in my lap: "Shh, Mama!" Life is wonderful!

Awwww, that's so sweet! I'm glad "life is wonderful"! And, this Babushka would shake her head at you being brave enough to try to negotiate a tricycle in the mud!! That is probably a lot of fun for them, though!!

I think Raia takes after Baba Julie!! I love my birds!! I saw a Blue Heron flying down The Plaza again and got SO excited!! (Abby just looks at me, strangely!!(: ) It is such a BEAUTIFUL sight!! And, of course, Raia's trying to fly!! I talk to the birds as I'm walking and tell them to come to MY birdfeeder!! Love you all!

PTL! My petitions for your yesterday were answered.

How I remember Leetra standing in our kitchen at the duplex, flapping her arms until she looked like she might fly. (I think she was actually attempting to jump, but the vision makes me think of Raia.) Much love.....

I'm enjoying reading about your Advent activities. I look forward to Iain being old enough to do things like that (but I sure enjoy him at the exact age he is - three month today!). And yes, the Bumbo is just a seat; sorry to disappoint! :)

I am loving your pictures. I guess you don't take after me. I hadn't updated my blog for over a month until today. But I have an excuse. Cancer just doesn't have the appeal of pictures of cute children.

Unlike the athletes who answer, "I'm going to Disney World," when asked what they are doing after a big win, I'm going to MacWorld. I'm not even waiting to get the final treatment. That will wait until I get back from San Francisco.